CMSI Study: Public TV Leads in Diversity for Docs, but Not in All Areas 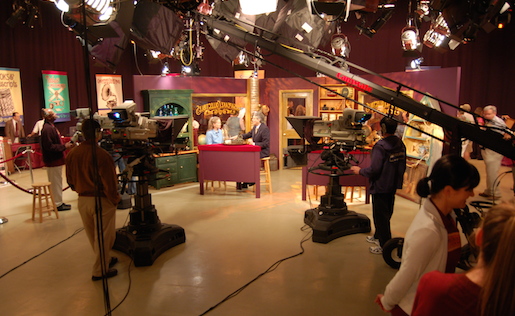 Inside Maryland Public Television's Studio during the taping of "Chesapeake Collectibles" in June 2010. Image courtesy of Wikimedia Commons.

The implications: Independent filmmakers with a diverse team or characters have options these days, but their best bet is still public TV. Public TV can celebrate the diversity in “Independent Lens” and “POV,” but can’t boast about consistent diversity in other doc series.

"But today, with HBO, CNN, Pivot, Netflix, Amazon and many more jockeying for documentaries, is public TV so distinctive?"

The Corporation for Public Broadcasting (CPB), which channels the Federal dollars to stations and programs, proudly announces on its website that “Digital, Diversity and Dialogue are the framework for public media’s service to America” and founded “to champion the principles of diversity and excellence of programming, responsiveness to local communities and service to all.”

But it’s not always easy, given public TV’s funding structure and history, to demonstrate diversity. That’s where independent filmmakers have always made a difference. Their programs have often brought voices and perspectives to TV and to the American public that go beyond TV’s racial, gender, socio-economic and geographic default settings.

It’s always taken effort, although — as IDA lifetime achievement award-winner Gordon Quinn has often explained — the fact that public TV is public made it possible to make that effort. Independent pressure on public TV to be more diverse — to be more representative of America’s diversity — resulted in the creation of a series showcasing independent work, “POV,” in 1988. In the same year, Congress also ordered the Corporation for Public Broadcasting to create the Independent Television Service (ITVS), to co-produce diverse and innovative independent work offered to public TV. By 1999, ITVS developed a showcase series, “Independent Lens,” co-curated with PBS.

Last year, both “Independent Lens” and “POV” were threatened with removal from their prime-time PBS spot — a life-threatening move for both series, which are tied contractually to public TV. The pressure began again. After nation-wide protest from independents, non-profits and viewers, arguing the need for diversity, PBS pledged a one-year commitment to the programs.

Photo by flash.pro
on Flickr and used here with Creative Commons license.

But today, with HBO, CNN, Pivot, Netflix, Amazon and many more jockeying for documentaries, is public TV so distinctive? Could indies with diverse perspectives and voices go elsewhere? Could viewers? To find out, we counted female and minority participation in commercial and public documentaries.

We examined 165 documentaries that aired in either during the 2014 or 2014-2015 season in the U.S. We focused on social-issue documentaries produced by independent makers, as represented in series that curate authorial works. For commercial TV, we chose “HBO Documentaries” and “CNN Documentaries.” For public TV, we chose “Independent Lens” and “POV.” These four series are all series seriously considered by independent filmmakers and their agents when deciding on a broadcast partner for the same kind of social-issue work.

We also, for comparison within public TV, selected for analysis three other public TV series featuring social issue documentaries. These series often employ independent producers to work on these programs, and sometimes even select programs based on pitches by them, but maintain control over the ultimate design and look of the program. We chose two series that feature social issues, “Frontline” and “American Experience,” as well as “American Masters,” an arts series featuring the social context of performance. We chose these other series on public television to see whether curation of independent authorial work was more significant in explaining minority and female representation than the venue of public broadcasting itself.

We asked questions about both minority and female participation, both as directors and producers. In asking about minority makers, our standard was whether at least one member of the relevant group was a U.S. minority within the federal categories. We also asked whether the documentaries featured minority, international and/or female characters in a major role, which was considered as recurring characters who shape the core narrative and motivate the arc of the action or explanation. For international characters of color, we included Middle Eastern. In all cases, any maker or character who occurred in two categories, e.g. minority and female, was counted in both.

We combined results for “Independent Lens” and “POV,” whose results were similar, and for “HBO Documentaries” and “CNN Documentaries,” which also featured similar results.

“Independent Lens” and “POV,” which have similar results, feature many more programs that have at least one minority director than either commercial TV or any other public TV program.

Independent Lens and POV, which have similar results, feature many more programs that have at least one minority director than either commercial TV or any other public TV program. Graph courtesy of CMS Impact.

“Independent Lens” and “POV” feature more films with at least one women director than HBO and CNN, but not by as large a margin as directors. Also, one other public TV show featured many women directors.

But in one area, commercial TV excels: the category of producers, a category that can cover a lot of roles, from arranging a shoot to filming to fundraising. But one thing is in common: producers do not get authorial credit. Given commercial TV’s record of minority producers, it also seems that often being a producer does not necessarily lead to opportunities as director.