Should a Local News Startup Have Reporters Write Press Releases? 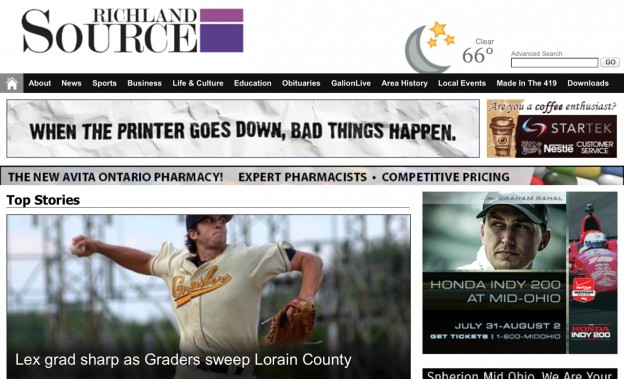 At a conference of local news entrepreneurs in Philadelphia recently, speakers were sharing tips on innovative ways of making money when Jay Allred took the floor.

He’s the charismatic publisher of Richland Source, a two-year-old news startup in Mansfield, Ohio, and even among the entrepreneurial crowd gathered for the Local Independent Online News Publishers meet-up, he stood out for his willingness to experiment.

For example, his team this year distributed 50,000 popcorn bags emblazoned with the Source’s brand – and those of paying advertisers – for free to local high school booster clubs and athletic directors, putting their logo into thousands of those coveted millennial hands.

They also spun-off a T-shirt company in December 2014 that harnessed civic pride around the town’s area code, turning “Made in the 419” into the local version of I HEART NY. For these experiments and others, the Source team has been rewarded. They saw 77,000 unique visitors in June 2015, up from just under 14,000 in July 2013, a month after they launched. Although they still have one hand in the pockets of the office equipment CEO who’s funding the project, Allred says the Source is close to being profitable and is on track to generate $500,000 in revenue this year. But one innovation that Allred outlined to the group that day in Philly stood out for another reason. Earlier this year, Allred’s reporters started to write press releases — breaching journalism’s sacred line between editorial and business.

Allred says the idea to leverage the writing skills of his reporters came about because his staff were seeing badly written press releases coming in from local businesses. The Source runs press releases on their website, distinguished from regular reported stories by the absence of a reporter’s byline.

Allred’s team realized that behind the poor copy that was coming in, lay opportunity: a market among business owners in town who weren’t skilled writers but were willing to pay for help writing press releases, web copy and other editorial products.

To figure out how much to charge, Source staff researched rates charged by advertising agencies and discovered the going rate was about $100 an hour. So they set their own rates at $75 to $125 an hour, which they felt made sense for a small Midwestern town.

Some of the reporters resisted this new revenue-making scheme. So to create a sense of separation, the Source devised a scheme whereby the reporters’ salaries are paid out of the editorial budget and the work they do writing press releases and other editorial products comes out of the business budget. It’s not an airtight solution by any means; some legacy journalists would be unimpressed. But Allred is unapologetic.

“In small business, church and state have to mingle,” he said.

He also noted that at the Source it’s not just the reporters who are filling new roles. When big weather stories break, everyone from the website founder to ad sales reps to interns are asked to help reporters with their coverage by using their smartphones to take photographs of the weather’s impact near their homes.

Startup news operations like his, he argued, don’t have the luxury of principles that have historically kept reporters and ad sales reps in separate chambers. An all-hands-on deck mentality takes over and everyone has to be willing to pitch in to keep the operation afloat.

“We tell people that they will not win a Pulitzer here,” he said. “You have to be OK with that. But cooperating with the customer can be a win for everybody.”

A NEWS STARTUP WITH A MISSION

The Source set up shop June 2013 with eight employees in a rehabbed storefront in the historic downtown of Mansfield, the county seat of Richland. The space is open-plan and wireless and has the air of a tech startup. From the get-go they wanted to cover news with a different set of priorities.

Since 90 percent of the population in Mansfield don’t commit crimes, the Source leaders reasoned, they would give their “front page back to those folks” and allow only 10% of their coverage to be about crime. Instead, reporters would focus on portraying the reality of life in the town, “the quiet accomplishments, the amazing victories and the noble efforts.”

The Source’s initial approach to paying the bills was through the traditional route of display advertising, and 85–90 percent of their revenue still comes to them that way. But they soon realized that wasn’t going to be enough in the long term and that’s when they decided to get creative and found themselves challenging the norms of traditional journalism.

JOURNALISM ETHICS IN A NEWSROOM OF ONE

Josh Stearns, who studies sustainability in local news for the Geraldine R. Dodge Foundation, says local news operations like Richland Source are not alone in pushing the boundaries in the quest for sustainability.

“I think there are decisions being made and experiments happening across all levels of journalism that raise new questions about the separation of business and editorial,” said Stearns in an email. “I know hyper-local publishers who cringe at how some mainstream newsrooms use native advertising just as I know there are established journalists who worry about blurring lines in community newsrooms.”

Stearns makes the point that some hyper-locals are run by solo practitioners who do ad sales and reporting. “When you are a newsroom of one how do you separate ad sales from reporting?” he asked.

One-man-bands like Kevin Coughlin, a former Newark Star-Ledger reporter who now runs Morristown Green in New Jersey,  occupy many roles – reporter, editor, salesman and publisher – and their ever-deepening web of relationships with the communities they cover makes it increasingly difficult to figure out how to handle issues of church and state.

“Multiple revenue streams are essential to the survival of local news operations, and experimentation is part of that equation,” Coughlin wrote in an email. “Generally speaking, the more transparent you can be, the better for everyone. In actual practice, however, it’s not always so simple.”

For example, in the name of diversifying his revenue stream Coughlin accepted a freelance gig from a local nonprofit to teach children basic video production skills. He acknowledged the grant online, but, he wonders, does he have to declare it every single time he writes about that same non-profit?

Similarly, he’s sold freelance videos to organizations he covers. Does that need to be disclosed?

“’Business’ is a hard concept for recovering journalists like me to swallow,” he said. “Yet survival demands it.”

Jake Batsell, a journalism professor at Southern Methodist University and the author of “Engaged Journalism,” has studied newsrooms of various sizes and though he doesn’t know any reporters who would be comfortable writing press releases he points out that it’s not uncommon nowadays for journalists to help with subscription drives and to host sponsored events.

He believes journalists have been protected for too long from thinking about what goes into the business side of their operation and it’s about time that changes … or “they’ll be doing great, kick-ass reporting until the lights go out and their publication doesn’t exist anymore.”

That’s how Allred sees it at the Source.

“Church and state was a great rule to have when money flowed like water through newspaper hallways,” Allred said. “But the days when a reporter can put their hand on their hip and get mad about things is over. [Business and editoral] have to get together.”

Correction: This story has been updated to correct the name of the university where Jake Batsell teaches.

2 responses to “Should a Local News Startup Have Reporters Write Press Releases?”