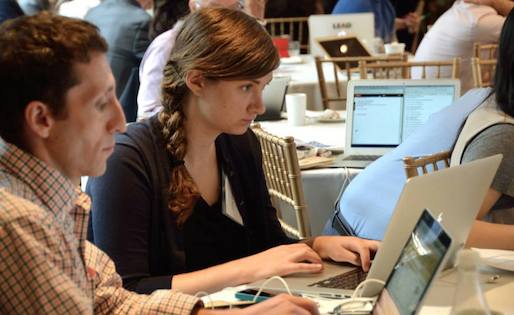 Hard at work at Collab/Space NYC 2015. Photo by Lizette Terry.

The workshop took place at the Ford Foundation in New York and was sponsored by the Donald W. Reynolds Journalism Institute at the University of Missouri. Eight presenters working on innovative projects from organizations like the Atlantic, BBC, Climate Desk, AP and more got the conversation going. Attendees later collaborated in breakout groups to brainstorm solutions.

The Shifting Tides of Media and Journalism, by Peter Himler, Forbes

Innovation from Within: Collab/Space NYC 2015, by Meg Dalton, MediaShift

“Want to know what’s trending in media and technology? Collab/Space is a great way to get the latest news and gather intelligence about what is really going on in the business of media. I learned more in a day than I would normally learn in a month of doing intensive research about the forces that are shaping the media.” -Patricia Vaccarino

“The structure, pacing and tone were really good. Professionals and experts working closely together from the get-go. Important topics addressed via serious fun. Easy, open and informative time was had by this attendee. I’ll be back!” -Mark Irwin

“The day runs a bit long. Would be better if it were a bit shorter or if there was an additional break mixed in. Also, the quality of the breakout session really depends on the people in each group. The group I was in last year had a much better understanding of the exercise.”

“I’ve been to a few dog-and-pony shows, and I thought Collab/Space would be like every other one. I went having no baseline and not expecting much but I was quite surprised! Mark runs the program extremely well and includes techniques to loosen up the audience — it was fun! The program line-up, exercises, activities, facilitators and moderators were relevant and experienced. Best of all, the program was entertaining and educational – at the same time! I also met some great people and gained a lot of insights about the product that I presented. Highly recommended!” -Matt Khoury, Thomson Reuters

“It might have been even more helpful to have the facilitators match up based on their past experience in addition to being great facilitators. I thought that most of the improv time could have been limited and used instead for structured conversation about the projects.”

“I never really know what to expect when I go to a conference or event where there are ‘breakout sessions’ or ‘improv’ — usually I get a little nervous and figure I’m going to dread that part of the program. The structure of the program and the self-effacing nature of the improv leader immediately put me at ease from the start of the day, and I really had a great time.”

“While the theme of this workshop was on ‘intrapreneurship,’ only a few of the projects were about that and the challenges identified by the facilitators did not focus on this. In the end the breakout sessions (and also the afternoon improv) was more about basic business model/startup exercises. I wasn’t so much interested in ‘how to build a better home page’ but rather how to build effective teams and organizational structures to make this happen in a cost effective and scalable way. Across larger media orgs, if we are focusing on tech innovation, I would like to know where dev teams sit within the organization, how they work with editorial, reporting structures, how they recruit, and what their product cycles look like (as an example). At The Economist for example, we had an in-house innovation lab but it got shut down because it wasn’t creating any revenue-generating products.” -Sunmin Kim, The Economist

“Rarely do you get to go to day-long conferences or workshops where engagement and connections are the number one priority: I thought the structure of the presenters with the afternoon breakout session was unique, well organized, and entirely useful to the participants. I hope more organizers and event planners take notes from you!” -Gillea Allison, Blue State Digital

Sonia Paul is a freelance journalist based in India and is the editorial assistant at PBS MediaShift. She is on Twitter @sonipaul.