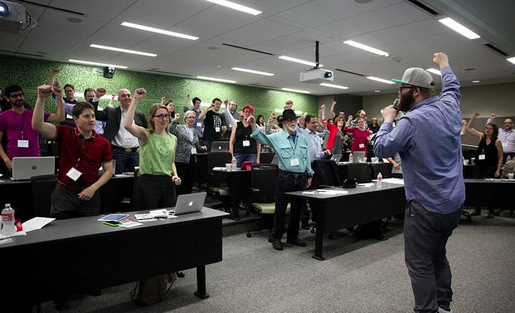 Once again, MediaShift is producing a Collab/Space innovation workshop in New York at the Ford Foundation focused on “intrapreneurial” projects at media and tech companies. Not only will it be sponsored by the Donald W. Reynolds Journalism Institute at the University of Missouri, but the projects might get Missouri students to do capstone projects focused on helping them succeed.

MediaShift’s Collab/Space events have been a huge hit by combining inspirational talks, startups and innovation projects, improv comedy techniques and small-group breakout sessions. We aim to bring together a diverse group of participants, including entrepreneurs, journalists, publishers, technologists, designers, marketers, investors and major players in the tech and media scene in NYC.

Keynote speakers include Cory Haik of the Washington Post and Sree Sreenivasan of the Metropolitan Museum of Art, with MediaShift’s Mark Glaser as emcee and Breaking News’ Andy Boyle as the improv facilitator. The workshop will take place on July 15, 2015, from 9 am to 5 pm, with a mixer to follow from 5:30 to 7:30 pm.

Description: TheAtlantic.com was redesigned to create a distinctive digital experience that would be a direct, dynamic extension of its core identity in journalism — a “real-time magazine” — joining the speed and urgency of the web with the noise-cutting and impact that have always been central to The Atlantic’s ambitions. The new home page is composed of full-width modules, each representing either one big story or a constellation of connected stories, which can be moved up or down the page, according to the needs of the moment. Placing connected content within each module is intended for better orientation and inspired by the emergent logics of scrolling and swiping in mobile media: The vertical axis of the home page represents a logic of exploration (scrolling); the horizontal axis, a logic of connection (swiping). The logic has been applied to article pages too: Next to stories (horizontally), there are links to related articles; below the stories (vertically), there are links to unrelated articles. Meanwhile, there have been supporting changes to the CMS to render it more intuitive and efficient against the added complexity of the programming, and the entire site is more amenable to testing in order to inform what’s changed on the site going forward.

Presenter bios: Matt Thompson is the deputy editor of TheAtlantic.com,  where he helps to lead editorial operations and shapes strategic development. Thompson joined The Atlantic from NPR, where he most recently directed news teams covering race, ethnicity, and culture; education; and global health and development.

for theatlantic.com, citylab.com, The Atlantic Magazine: Digital Edition iOS app and the custom content management system (CMS).  Since joining in 2009, she has led three redesigns of theatlantic.com during which time the audience has tripled and traffic has grown six-fold.  She also managed the development of The Atlantic’s custom CMS, which consolidated three previous content management systems. Prior to The Atlantic, Betsy worked at Capital One on the customer acquisition testing team, in new product development and then on the redesign of the US Card online banking site.  Betsy graduated from Dickinson College with a dual major BA in International Business & Management and French.  She lives in Washington, D.C.

Description: While there has been a lot of talk over the last few years about the “death” of the home page, home pages remain the single most trafficked page on most news publishers’ websites.  In BBC.com’s case, the international home page is seen by almost 25% of BBC.com’s monthly audience (outside of the U.K.).  In a new home page design set to launch this summer, BBC.com begins its pursuit of an ambitious goal: Reimagining the international home page to create a discovery mechanism for audiences that highlights and provides access to all of BBC’s distinctive content, products or services available in a reader’s territory for the device they choose to access the site.  BBC.com will share their hypotheses on the future of home pages to kick off a discussion around experimentation and innovation on this important piece of real estate.

Presenter bio: Liz Raisig is Vice President of Product Management and Operations for BBC Worldwide North America.  In this role, she leads the day-to-day operations of BBC.com in North America, including product strategy and audience development.  In addition, Liz holds responsibility for BBC.com’s international homepage on a global basis, including the vision and execution of an upcoming redesign.  Prior to several roles with BBC.com, she was a member of BBC Worldwide America’s Strategy and Research team.  Before joining BBC Worldwide, Liz held roles at HBO and MicroStrategy across marketing and finance.

Description: Convene is a mobile app for events (conferences, seminars, summits, etc.) that connects attendees to the event and their professional community. Eliminating wasteful paper-based program guides and reducing an event’s carbon footprint, Convene tucks all of that information into a convenient mobile app. Participants, attendees or general users can use Convene to construct their agenda, get real-time announcements, search for content, interact with live-polling and more.

oury is obsessed with technology, mobile, and creating products and services that solve problems. He is product manager extraordinaire for Convene. A passionate customer advocate, Matt’s enthusiasm and energy directs the day-to-day operations of
Convene and his vision drives Convene’s long-term strategy. Many moons ago, he started his career as a software engineer cranking out code. In his
spare time, he loves to read about and tinker with the latest cutting edge tech.

Description: Climate Desk unites nine innovative news organizations to improve and share reporting on one of the most important stories of our time. The journalistic collaboration explores the impact—human, environmental, economic, political—of a changing climate, with a focus on multimedia reporting, and publishing cross-platform. The partners are The Atlantic, Center for Investigative Reporting, CityLab, The Guardian, Grist, The Huffington Post, Mother Jones, Slate, and Wired.

Presenter bio: James West is the Senior Producer for Climate Desk, a journalistic collaboration across top news shops, including The Atlantic, The Guardian, Huffington Post, Slate, Wired and Mother Jones. Also a senior producer and reporter for Mother Jones in New York. West wrote his first book, Beijing Blur in 2008. It is an intimate yet far-reaching account of modernizing China’s underground youth scene. After completing a masters in journalism at New York University in 2007, West returned to Australia as the executive producer of the national affairs program Hack. Since then, he has produced a variety of Australian television and radio programs, including the leading debate show Insight on SBS TV and a documentary series for ABC TV, Two On The Great Divide.

Description: Deaf Access News plans to create a digital news experience to inform an underserved community that uses American Sign Language as its first language. The platform expects to be a solution for up to two million Deaf and hard-of-hearing people in the U.S., delivering news, business, health, politics, entertainment and sports content in ASL. DAN strives to address a news-literacy gap it believes exists because closed captioning is missing much of its intended audience and English-based stories are failing to enlighten many people with hearing loss.

Presenter bios: Larry Lage, a sports writer with 20 years of experience and the child of Deaf adults, was a 2015-16 Knight-Wallace Fellow at the University of Michigan. The mid-career sabbatical led to the 42-year-old Lage attempting to make current events and many forms of media, including radio and podcasts, accessible to the up to two million Americans whose native language is American Sign Language. The Associated Press Sports Writer and Michigan State graduate lives in Ann Arbor, Mich., with his wife, Suzanne Mrozinski, a special-education teacher, and their two children, Lleyton and Elle.

Paul Cheung is AP’s Director of Interactives and Digital News Production. The director
manages a global team of visual journalists, data journalists and researchers who produce multimedia stories and information graphics for all formats, including print, online and mobile. Prior to joining the AP, Cheung was The Miami Herald’s Deputy Multimedia Presentation Editor and a Senior Graphics Editor at The Wall Street Journal. Cheung is also Asian American Journalists Association (AAJA)’s national president advocating for newsroom diversity as well as fair and accurate coverage of AAPI in media.

Description: Google News Lab is a new effort at Google to empower innovation at the intersection of technology and media. Its mission is to collaborate with journalists and entrepreneurs to help build the future of media. And they’re tackling this in three ways: 1) ensuring Google’s tools are made available to journalists around the world (and that newsrooms know how to use them); 2) getting helpful Google data sets in the hands of journalists everywhere; and 3) designing programs to build on some of the biggest opportunities that exist in the media industry today.

Presenter bio: Daniel Sieberg is the head of media outreach with the Google News Lab, which seeks to empower storytelling at the intersection of media and technology. Prior to joining Google in 2011, Sieberg was a technology correspondent at ABC News, CBS News and CNN as well as a contributor to BBC News, MSNBC and PBS. His first book, “The Digital Diet,” is about embracing a healthy approach to technology in our connected world. Sieberg has a master’s degree in journalism with a focus in technology from the University of British Columbia and lives in NYC with his wife and two daughters.

Description: The Hive is a special project of USA for UNHCR, a non-profit that supports the work of the UN High Commissioner for Refugees and its work to protect and support refugees around the world. The Hive is focused on transforming the ways in which USA for UNHCR communicates and engages with audiences in the United States. A key part of the project is a centralized “information infrastructure” and a commitment to knowledge sharing, internally and with partners, to help enhance collaboration and accelerate innovation.

Presenter bio: The Hive’s Knowledge Manager, Kate Jordan,
joined the team from Burson-Marsteller where she supported operations, horizontal integration and strategy development on the firm’s largest account. Previously, she managed the development of both a new website and internal knowledge sharing network for Edelman, and was part of the Corporate Communications team at the New York Times Company.

Description: POV has been developing a number of tools that make virtual reality accessible. The VR starter kit is so lightweight it can run on a public library computer. Unlike other virtual reality projects, it runs in the browser. (The projects at Sundance were apps made with proprietary technology.) POV has had tremendous success with the starter kit in small workshop settings (at NICAR, ONA on the journalism side and the Tribeca Film Festival, Sheffield Doc/Fest, and MIT’s Open Doc Lab in the documentary side). POV is still looking for the perfect community or corporate partnerships to bring this tool into classrooms and newsrooms, and have yet to convince media creators to use the tools, which are free and open-source.