How to be an Awesome Journalist on the Internet 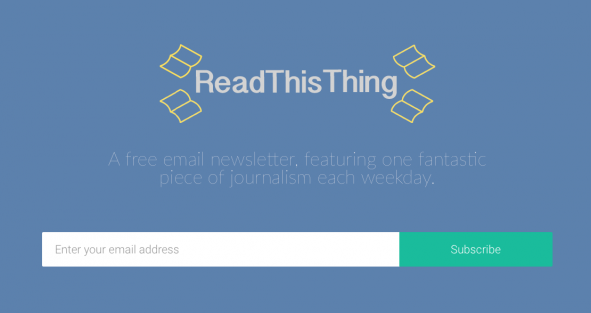 ReadThisThing is an email newsletter that features one fantastic piece of journalism each day.

Practically everything has changed in media. Here are some ways to build an audience, make yourself more effective, and find your path to success in modern journalism. We’re not pretending to tell you how to do good journalism. That part should be learned the ways it’s always been learned — mostly on the job. This post is intended to offer some ways for a journalist to navigate the new landscape of news.

Maintain a high standard for your work, but publish early and often. And understand that different content makes sense in different places.

"But, outstanding stories have the opportunity to reach a wider audience than ever in history. Find a new angle, a new way to tell a story, or a new type of story altogether."

If you’re an investigative reporter at The Washington Post, you probably shouldn’t just start cranking out 200 word op-eds in the newspaper for the sake of being prolific — but maybe Medium would be a good place to do that.

Here are some ways to be prolific beyond your main reporting gig:

2. Think about commoditization of news

Fifty years ago, you could make a career out of writing recaps for baseball games or summarizing the mayor’s speech. Today, that work is commoditized.

What journalism is no longer a commodity? Look at the ‘most-viewed’ section on a publication you like — that’s the stuff that isn’t getting repackaged and summarized and stolen as much.

Try to do work that won’t be commoditized.

And if your work is going to get commoditized, you’d be wise to think about how best to keep some of the value for your publication.

For instance, when @natashavc landed an interview with Jay, a key witness in the trial chronicled in Serial Podcast, it was clear the interview would be quoted and repackaged across the web in minutes.

So, instead of sharing the whole interview out at once, The Intercept released in three parts, leaving those who reposted their content little choice but to give credit and traffic back to the source as they promised the upcoming parts of the interview.

But, you can fast-track the process and benefit both your brand and your publication by imply being present and engaging. Here are some ideas:

4. Don’t spread yourself too thin

Over the past 5 years all the journalism schools started shifting curricula to say that a modern journalist can’t just be a writer. She needs to be a photographer, a videographer, a social media manager, a web developer, a graphic designer, an editor, and a writer.

If you meet someone who can be an asset to a newsroom in all of those areas simultaneously, let me know. It certainly doesn’t hurt to build an understanding of these verticals, but you need a differentiating expertise, not an “inch-deep, mile-wide” background.

As mentioned above, lots of journalism is being commoditized. But, outstanding stories have the opportunity to reach a wider audience than ever in history. Find a new angle, a new way to tell a story, or a new type of story altogether. Experiment with these things and iterate.

Here are a few examples:

You don’t need to become obsessed with #hashtags and try out every new tool or app that comes out. But, the advent of mobile and the recent tech boom have led to some amazing tools that make journalism easier.

Here’s where to find them:

Spend time finding the stories that are most compelling to you and reading them. This is the best way to spark ideas, spot trends, learn new things, and improve your abilities as a journalist.

Here are some places to find great stories:

A recent example of the ReadThisThing newsletter.

The goal of this post isn’t to tell you how to do good journalism — but that’s hands-down the most important part. There are no shortcuts, hacks, or tricks to finding and reporting a great story.

This piece was produced by the team at ReadThisThing, an email newsletter that features one fantastic piece of journalism each day. This piece originally appeared on Medium.