What Snow White Can Teach Journalists About Audience Engagement 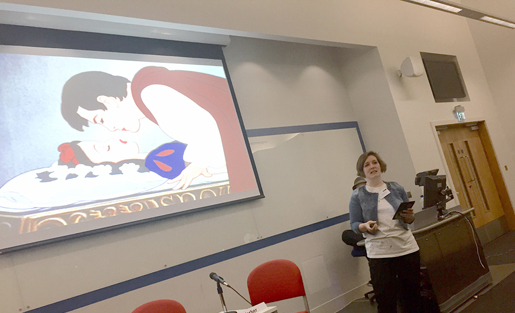 Jennifer Schwanenberg jokingly refers to consumers as Snow White waiting on the prince, the advertisers to give them what they want. Photo by Emily Erwin.

In a keynote speech earlier this month at the Journalism Innovation Summit at City University London, Jennifer Schwanenberg, the program manager of Next Media Accelerator, used a classic Disney cartoon, Snow White, to discuss business models for news in the digital age.

"If Disney princesses can evolve themselves, so can journalism." -Jennifer Schwanenberg

Schwanenberg jumped into her presentation with a comparison of Snow White and her furry friends to the relationship between the journalist and the audience. This creative analogy drove her into a discussion about audience building.

Schwanenberg spoke to a group of journalists from all over the world who gathered at City University London on Friday, May 15, for the first annual Journalism Innovation Summit produced by PBS MediaShift. Both professional and student journalists spent the day discussing innovation in journalism and ways to adapt to the field’s changing world.

Schwanenberg’s first suggestion was to take advantage of license fees if a journalist has the opportunity to do so at their organization. Schwanenberg used organizations such as the UK’s BBC and Norway’s NRK as examples. According to Schwanenberg, 90 percent of Norwegians consume NRK’s content. Since the license fees encourage such a large following, it is easier to build a dedicated audience. If consumers are paying for it, they will want to use it.

Her second suggestion was to encourage subscriptions. Subscriptions encourage the idea of “FOMO,” or fear of missing out, with an audience, and they are more likely to buy into a journalist’s work through this fear. Schwanenberg said she believes by putting subscriptions in place, readers feel they are missing out on important stories and content that others are getting and will feel the need to subscribe to content to be included in “the next big thing.”

Schwanenberg also encouraged the use of pay-per-view, or the idea of customers paying per article they read. Customers can choose what particular content they prefer to read instead of having to pay for an entire season or year.

Lastly, Schwanenberg commented on the importance of crowdfunding. This phenomenon allows journalists to ask their readers to pay for the content they want to read. With crowdfunding, readers have the ability to sponsor specific content they want to consume and build a relationship with the journalist. This process also builds trust with readers because it is a transparent practice,  Schwanenberg said.

Display advertising is also important when trying to make journalism a lucrative career, even though Schwanenberg described it as “a mess.” There are many messages from marketers being publicized to consumers, and it is not easy to make this a simple process.

“The mess is changing a bit because publishers didn’t know how to fix this mess,” Schwanenberg said.

Schwanenberg went on to suggest ways to combat “the poison apple”: lead generation. Some strategies that have stemmed from lead generation include sponsored content, native advertising, and affiliate marketing.

Schwanenberg wrapped up her keynote speech with a comparison of the journalist-audience relationship to Prince Charming. She said that the media industry is waiting for its Prince Charming to make it a more lucrative career, but she warned that this is not going to happen. She encouraged journalists to take charge in showing their readers where to find the good and to “be cocky” with their content because marketers want their work.

After an engaging keynote speech, Schwanenberg left the audience with some creative yet powerful words of wisdom by tying back to her original whimsical theme: “If Disney princesses can evolve themselves, so can journalism.”

Hannah Jamil is a senior Creative Media Production major at The University of Oklahoma from Miami, Oklahoma. She currently serves as the Music Director for OU’s student radio station, The Wire.

Aimee Schnebeck is a junior Broadcast Journalism major at The University of Oklahoma from Denver, Colorado. She currently serves as senior producer for OU’s nightly news broadcast.

Emily Erwin is a junior Creative Media Production major at The University of Oklahoma from Justin, Texas. She currently serves as technical director at Journey Church in Norman, Oklahoma, and big screen operator and content creator for OU’s athletic department.

Macy Muirhead is a junior Creative Media Production major at The University of Oklahoma from Tecumseh, Oklahoma. She currently serves as vice chair of public relations for Oklahoma’s largest day of community service, and she is a host and producer of her own radio show for OU’s student radio station, The Wire.