In the Smartphone Era, Can Street Photography Be Illegal? 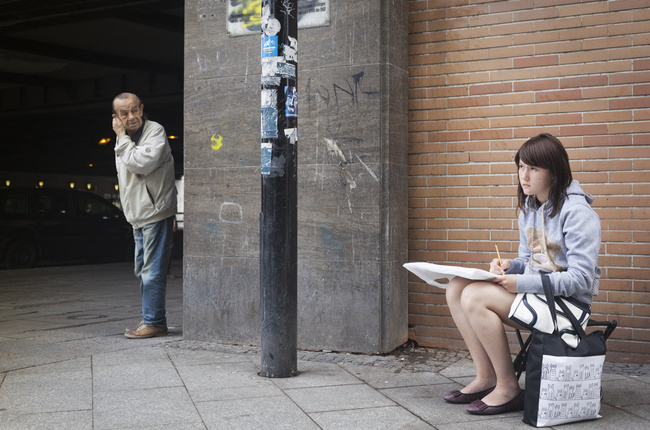 Is street photography illegal in Germany?

To find out, Berlin-based street photographer Espen Eichhöfer has appealed a conviction that he invaded a woman’s privacy. The 528 supporters of his project on the Startnext crowdfunding platform want to find out too, so they gave him 18,075 € (roughly $19,850) for legal fees.

“If you go out in public space, you must expect to be photographed. And it`s just a fact. People constantly use their smartphones – no one knows in which context those photos are used for.”

“I want to find out if street photography in an artistic context is legally secured in Germany,” Eichhöfer said on his crowdfunding page.

The ultimate goal is to obtain “a landmark decision in order to create a clear legal situation for all artists in the future.”

He started his crowdfunding campaign after one of his street photography subjects decided to sue him for publishing an image of her in an exhibition at C/O Berlin, alleging that the photo was a violation of her privacy rights.

The legal basis for her lawsuit comes from a law passed in 1907, which stated that if a photographer didn’t have the permission of the subject in a photograph, they weren’t allowed to publish the image.

Eichhöfer works for the Ostkreuz photo agency and has been taking street photos in Germany for the last 12 years. He’s a professional, but being photographed in public is part of modern day life, no matter if it’s a pro or an amateur with a smartphone.

“If you go out in public space, you must expect to be photographed. And it`s just a fact. People constantly use their smartphones – no one knows in which context those photos are used for,” he told Through the Cracks via email Thursday.

Privacy in public has always been a murky area for photographers, both inside and outside of Germany.

Ignoring opposition by groups like the Press Photographers Association and American Society of Media Photographers, the Arkansas state senate passed a bill that would have effectively made street photography illegal last week. A story on the subject went viral on Fstoppers.com.

The bill was later vetoed by Gov. Asa Hutchinson.

“In its current form, the bill unnecessarily restricts free expression and thus could have a chilling effect on freedom of speech and freedom of the press,” he said in a statement.

Time for an Answer?

Should a photograph captured in public be the property of the photographer or the subject? German photographers may soon have a clear, legal answer.

“Street photography is an art form that is almost as old as photography itself,” Espen said on his campaign page.

Eichhöfer spread the word about his crowdfunding campaign through his agency, emails, a photographers’ union, and the press.

The case has received attention from Berlin Morgenpost and the TV station Das Erste, and Eichhöfer wrote a story about it for Vice Germany.

If crowdfunding had not covered the cost, Eichhöfer said he would still seek an appeal, partly with his own money and the Ostkreuz photo agency.

The trial is currently under appeal by both parties.

Any money left over after the legal battle will go toward a symposium on street photography, Eichhöfer said.

Sandra Proudman (@SandraProudman) is a writer and photographer based in Northern California. She is a believer in the power of crowdfunding to move projects and people forward.

One response to “In the Smartphone Era, Can Street Photography Be Illegal?”