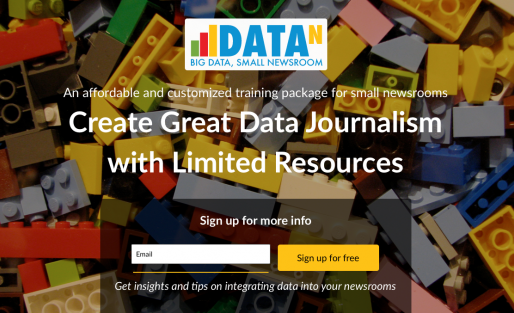 Since January, I’ve been developing DataN, the affordable, customized training program in data journalism for small newsrooms. Now the program has found its first user: Malaysiakini.com, the most visited news website in Malaysia (and also my former employer).

The DataN training program consists of:

"To my surprise, the participants started to brainstorm on data journalism project right after the training and came up with seven ideas, several of which are under discussion."

Based on feedback from the 10 participating journalists as well as the data and graphical components they produced in the first two weeks after the training, I would say the program has kickstarted a positive beginning.

From our post-training communication, 6 of the 10 participants have produced at least seven data/graphical components in their stories during the first two weeks after the training. The components include charts, maps, and interactive graphics.

Six of the ten participants produced at least seven data/graphical components in their stories.

I’m in the midst of measuring the performance, especially the time spent on stories that include these components, against the average numbers to further quantify the impact of training. But it could be tricky, as Malaysiakini does not analyze the web analytics it collects.

To my surprise, the participants started to brainstorm on data journalism projects right after the training and came up with seven ideas, several of which are under discussion.

From a qualitative perspective, the training was well-received. Here are some testimonials from the participants:

“We are often impressed by the informative, interactive and sleek features on international news sites, but it never comes to mind that Malaysian news sites can do the same, simply because that is not the norm here. Hardly anybody, if any, is using this methods. The training was eye-opening in that it provided exposure to modern technique in journalism that can be applied in any kind of newsroom. It also breaks the traditional perspective that the role of producing journalism content is only for journalists. Clearly, modern content requires close collaboration with those having different skill sets, including programming and web design.”

“Although I felt the two-day course was a little too tight to cram in all things at once, it has been an enlightening lesson using and incorporating current technology and tools to convey our stories. It was an eye-opener for many of us who are still in the conventional and conservative method of reporting through text and images. Worth every minute spent attending the course. Highly commendable to fellow journalists.”

Another important qualitative measurement of training outcomes would be whether the training has changed the culture of the newsroom to be more proactive and creative in exploring different ways of storytelling. I plan to conduct another survey with the participants and other members of their newsrooms next month to gauge this information.

The preliminary outcomes, both quantitative and qualitative, have proven my fundamental assumption that DataN is something that small newsrooms like Malaysiakini need.

The next question is: how can I use the experience with Malaysiakini to improve my products and business plan?

What does Malaysiakini want and do?

In design thinking, we are told that what users do (and don’t do) is more important than what they say they want (and don’t want). In the case of Malaysiakini, I found that journalists’ answers and behavior were pretty consistent, and they have a profound impact on my products.

Before the training, they told me they didn’t want to learn data journalism per se; they wanted their journalists to be more creative in storytelling and realize there are different ways to tell different stories.

The ultimate goal, of course, is to differentiate their products from competitors’ and to increase their web analytics (page views, time spent, recirculation, etc.). Since Malaysiakini’s business model is essentially based on subscription and advertising, producing engaging and high-quality content is key to the company’s bottom line.

From my previous experience as a journalist at Malaysiakini from 2005 to 2013 as well as my communication with the participants, I know the journalists’ plates are full with daily breaking news, a norm in many small newsrooms. It has hindered their capacity to explore and experiment with new storytelling tools and approaches.

In short, “we want to be creative, but we have no time.” So, how does this situation affect my products?

The demand for creative storytelling, not just data journalism, struck me. Hence, I adjusted the training content to include non-data storytelling tools such as TimelineJS, StoryMapJS and the network visualizer tool KUMU. The post-training feedback showed that I had made the right decision. The participants said the possibility of using these tools in their stories was high. Another tool that received positive feedback in term of likely use is the mapping tool CartoDB. Data journalism tools like Tabula, Import.io, OpenRefine, and Datawrapper, which I thought were critical, performed slightly less well.

This insight should be read together with another finding. Compared to data visualization and other theoretical parts, more participants said data scraping (Import.io and Tabula) and cleaning (OpenRefine) were harder to learn. This came as no surprise since their learning curve is steeper.

The above findings may warrant some adjustments to my product offerings:

However, I would have to work with more newsrooms to find a broader pattern before making any significant changes to my products.

This post originally appeared on the author’s personal blog.

Kuang Keng Kuek Ser is a Tow-Knight fellow and was a journalist with Malaysiakini, the only independent news website in Malaysia practicing watchdog journalism in a highly-censored media environment. In 2013, he was awarded a Fulbright scholarship to further his study at New York University’s Studio 20, a journalism M.A. program that focuses on new media and digital innovation. Keng has interned with NBC Local Media to produce data and visual components. He was also a data visualization consultant at Foreign Policy.