My Experience in Developing ‘El Remedio’ at the J-School Hackathon 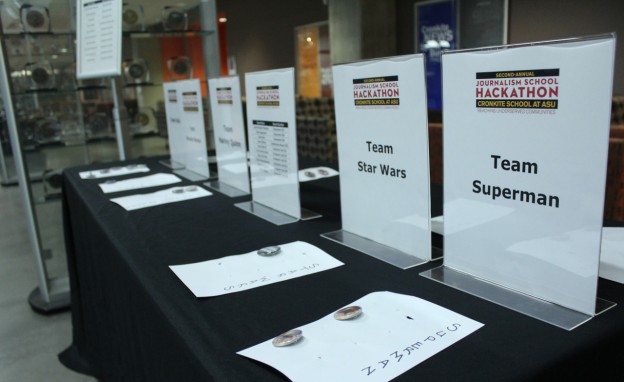 As a Latina journalist, I have always sought to tell narratives of the Hispanic community that I belong to. At the PBS MediaShift Hackathon at Arizona State University, I had the opportunity to take that interest in a startup direction and research and pitch an idea that would serve the Hispanic community of Phoenix and beyond.

I had the opportunity to represent the University of Wisconsin-Madison at the Walter Cronkite School of Journalism and Mass Communication at Arizona State University for this event. I was among other students who were as passionate about journalism as I am, whether it be print, digital, broadcast or strategic communication.

"To those who say that journalism is a dying field, I direct you to the brilliant entrepreneurs who are finding new ways to adapt to new media technology in ways that are socially significant. "

We divided into teams focused on data, engagement or gaming, all in charge of answering one question: How can media be used for underserved communities?

With that, teams were instructed to choose a problem, find a solution and pitch a plan to a panel of judges within two days that would serve underrepresented communities such as racial minorities, the elderly or people with disabilities.

With that, we were let off the leash to meet and collaborate with our teams for two days. We met with our team facilitators and had time to brainstorm, taking breaks to hear from major players in media entrepreneurship who were chosen to present at the Hackathon.

A dose of realism

After hearing advice from Skymall co-founder Alan Lobock and other notable speakers at the event, the Hackathon left me with one takeaway: My ideas are not special. What a humbling insight that was.

The lesson was not meant to be demeaning, but rather eye-opening. What makes an idea special is its practical execution. I may have a genius story pitch, but someone else certainly has the same idea. What actually matters is the way an idea is executed.

Mike Alonzo, chief operating officer of Storybyte and co-founder of User10, emphasized the importance of an idea even before the execution. He pushed our teams to share our ideas with anyone who would listen, to step away from the common entrepreneurial mistake of sitting on an idea. “The more respect you give an idea, the more it will receive during feedback,” he said.

Building off an Idea

My data team was selected to work with Hispanics as an underprivileged group in the community. As a Latina journalist who is especially interested in reporting on Hispanic issues, I was excited.

My team of four came up with the idea of bridging the gap between Phoenix’s Hispanic community and access to health care. We analyzed census data that showed where the stronger Hispanic communities were, as well as data on documentation and insurance. As February came to a close, 200,000 applicants were rejected from federal health insurance through the Affordable Care Act because of insufficient documentation.

The Latino community of Phoenix sits at the intersection of documentation and health insurance. In the research phase of the Hackathon, Jamil Falconi, one of my partners on “Team Grumpy Cat,” who also speaks Spanish, and I ventured out to find Hispanic people living in Phoenix to hear real-life anecdotes about their health care concerns.

We heard about various ways people deal with their lack of health care access, such as at-home remedies or Googling to find medical advice. One woman we interviewed said before she obtained documentation, she was uninsured and relied on her daughter-in-law, a doctor, to write prescriptions for her son.

“La Reina” (“the queen” in English) responded to questions in her native language, sharing her experience in accessing health care. Photo by Alex Arriaga.

Our idea, El Remedio, would be a mobile app that would be built in Spanish for the Hispanic population to obtain real-time health consultation. In the same way customers “request an Uber,” patients would be able to request health advice from doctors who speak Spanish and are from within the local Latino community, as well.

Execution of an Idea

The enthusiasm surrounding our idea was encouraging, but in the end, our business model lacked a solid enough structure for investors to get behind it. How would we incentivize doctors to be a part of the app? How would we make sure there was a sustainable revenue? These were the questions we kept hearing, but we had few answers by the time we stood in front of the panel of judges.

I left with the strategies and skills I learned in the process of developing and executing an idea. But I also saw the promise that the future of journalism has in a group of young student journalists like those that I was able to meet in Phoenix.

To those who say that journalism is a dying field, I direct you to the brilliant entrepreneurs who are finding new ways to adapt technology for socially significant uses. From an app that would provide information to disabled individuals about building accessibility to a game that would take users through a Black history tour of any city, I look forward to what we young journalists can execute to improve the world around us.

How the J-School Hackathon Turned Me Into an Entrepreneur, by Tresa Tudrick

Alex Arriaga is a junior at University of Wisconsin-Madison majoring in Journalism and Latin American, Caribbean and Iberian Studies. She has worked at a student student newspaper, The Badger Herald, for three years as news reporter and editor.