How the J-School Hackathon Turned Me Into an Entrepreneur 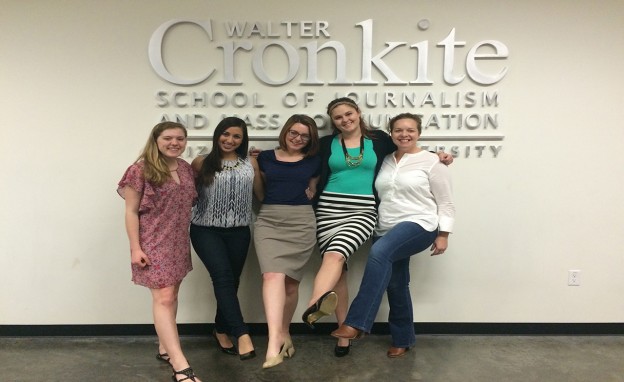 Team Harley Quinn taking a group picture at the conclusion of the PBS MediaShift J-School Hackathon. Photo by Tresa Tudrick.

To most, Feb. 27 was a typical, ordinary Friday. For 50 top students from 13 journalism and communication schools, this was the beginning of an intense, innovative experience at PBS MediaShift’s 2nd Annual Journalism School Hackathon at the Walter Cronkite School of Journalism and Mass Communication in downtown Phoenix.

Like many students, I went with an open mind, unsure of what would result.

“I absolutely believe that if there was a way to get to know other first-gen students on campus as well as across the country, it would help a lot.” -Lou Peralta

University of Florida student Ayana Stewart said she was nervous about the Hackathon.

“I have no coding experience at all!” Stewart said in a Facebook message. “The name threw me off.”

Networking was expected, motivational speakers as well, (hopefully a tasty lunch too), but what I couldn’t predict was developing a project that would turn into something bigger.

I drew from Mark Glaser’s hat to determine my group, Team Harley Quinn’s, fate. I picked a wild card — meaning we would pick the underserved audience of our choice. Right away, the team went to work having only met each other just minutes before. With less than 24 hours to design and create a sustainable project for an underserved community, we had our work ahead of us.

Topics were tossed back and forth. Ideas bloomed and others were shattered. But Team Harley Quinn decided on serving first-generation college students.

According to AZCentral.com, as of Saturday, March 7, the Arizona legislature slashed $99 million in funding for higher education. With the recent budget cuts, reaching out to first-generation college students is more vital than ever before.

This is the End

By dinnertime, we felt stuck in our tracks, mired in quicksand. We were falling slowly but surely down a deep dark hole of no return. Our idea was still conceptual and lacked an actual product. At dinner, pizza was served with a side of puzzled journalists with an extra helping of “how in the world are we going to pull this off?”

After eating our sorrows, we had two hours left to make this concept come to life. Something about deadlines and journalists just works — like Thanksgiving and football.

“First Gen Next Gen” was our idea — an app designed specifically for first-generation college students. Our app pitch can be seen here at the 12-minute mark:

Did our pitch win? No. Did my fellow journalists inspire me about what can be accomplished in a day? Certainly.

It’s been two weeks since the J-School Hackathon, and this experience is all I can think about. The problem with so many workshops I’ve attended in the past is that after the event, the creativity and motivation get put behind responsibilities and real life.

What keeps me going back to First Gen Next Gen is the outpouring of responses I’ve received from first-generation students at my home university, Northern Arizona University.

NAU first-generation college student Lou Peralta said in a Facebook message that an app like this would help in many ways.

“I absolutely believe that if there was a way to get to know other first-gen student on campus as well as across the country, it would help a lot,” Peralta said. “Sure there are programs like STAR, SSS, and First Scholars on the NAU campus, but they can only help so much … a way to create a support system among your peers without having to go through an office would be so beneficial.”

“In a way … this would help students know that they are capable of many things that may come as a challenge now but once you step forward, you can achieve many things,” Lightburne said.

I never would have labeled myself as an entrepreneur before the Hackathon. Sports journalism is my passion and what I am comfortable with. I didn’t believe I had “entrepreneur” in me. With the support of my fellow teammates, I want to make First Gen Next Gen a reality.

The best part about this experience has been meeting such a strong group of women in the field. By collaborating and using all our specialties, we were able to create something that will hopefully benefit future first-generation college students.

I’d encourage anyone to attend who is even slightly considering going next year. You’ll go with no idea how this will play out in the end and leave with new friends, ideas and a desire to serve your community.

To some, 2015 may be just like any other year, but for me, it’s the year I become an entrepreneur.

My Experience in Developing ‘El Remedio’ at the J-School Hackathon, by Alex Arriaga

Tresa Tudrick is a graduate journalism student attending Northern Arizona University. She is a sports reporter/social media guru passionate about fitness and women’s equality. Tudrick is a proud Italian first-generation college student who loves her family and friends. Her dog, Slugger Brady, keeps her on her toes. Visit her website at tresatudrick.com or follow her on Twitter @tresatudrick.