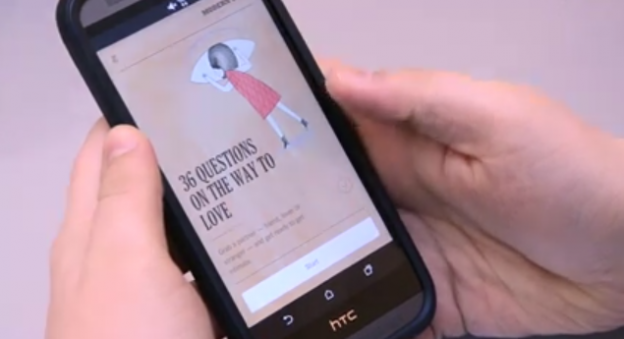 The New York Times was able to build and release an app based on a popular modern love column by following a prototype from a previous web-based app its team had created. Screenshot courtesy of RJI.

This week we learn how The New York Times quickly morphed a viral story into a successful mobile app, and we see how Project Syria uses virtual reality to immerse the audience in the news.

"It [virtual reality] is a very, very powerful embodied medium in which you feel like your body is present on scene. And I think that affords the ability to give people a visceral and deeper understanding of what's transpiring unlike any other medium today." -- Nonny de la Pena, producer, Project Syria

Efforts to tailor content specifically for smartphones has given rise to freestanding mobile apps inspired by individual stories. As an example, The New York Times quickly created its 36 Questions app to capitalize on the viral popularity of a single article, “To Fall in Love With Anyone, Do This.” Interactive News Developer Alastair Coote explains how and why the app was built.
Reporting by Tim Leible.
[To skip directly to this segment in YouTube, click here.]

Project Syria provides an example of how virtual reality technology is being applied to news, in this case creating an immersive experience that reconstructs real scenes and events that took place in Syria. Producer Nonny de la Peña explains how the project was created.
Reporting by Tatiana Darie.
[To skip directly to this segment in YouTube, click here.]