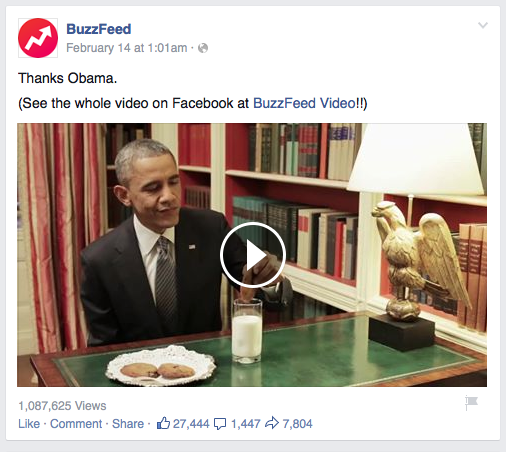 A case study of President Obama doing a social media BuzzFeed video to promote a policy wasn't the lesson on sharable content as expected.

My first draft of this article was as gushing as the rest of the reaction to Jonathan Perelman’s talk  “Creating Video Content for How It’s Consumed” at Social Media Week 2015 in New York. He is vice president of Buzzfeed Motion Pictures, a leader in online video.

“The absolute best session of the day for me was from Jonathan Perelman,” wrote a content strategist at the web agency Delucchi. Another agency, Something Big, blogged, “BuzzFeed knows how to bring it.”

"The social analytics company SocialBakers noted the distinction between viral as a short-term boost, and sharable as an organic process with a longer distribution."

I felt the same. However, after I did some basic math of the metrics of Perelman’s case study on the record-breaking views of “President Obama Made a BuzzFeed Video: Things Everybody Does But Doesn’t Talk About,” I had to rewrite. Despite the massive views of more than 50 million as an exclusive release on Facebook, the video’s public metrics reveals its social media “stickiness” played a marginal role in its massive distribution.

Perelman talked about new forms of storytelling for the mobile and social media era, “We think about simplicity and surprise as a way to create content. It creates stickiness that people want to engage with it and ultimately share it.” [Emphasis added.]

He then screened the video which featured President Obama doing awkward things “alone” with a prominent mention of the February 15 deadline to sign up for health care — a key policy priority. After the screening, Perelman said, “I’ve even lost count; I think it’s over 50 million views this has in the two weeks it’s been live on Facebook. It’s a perfect example of simplicity and surprise.”

Down the Metrics Rabbit Hole

As of March 1, two and half weeks after the release, the video had 50.48 million views via Facebook. That’s nearly double the 26.38 million views of their top-performing video on YouTube, “‪If Disney Princes Were Real‬,” posted five months ago.

Here is the basic math.

The “BuzzFeed Video” Facebook channel has about 4 million followers, and just 14 percent of the their followers shared it: 563,298.

Hypothetically, with the best metrics of 100 percent impressions — and views — of all their Facebook followers plus the 1.79 million views of the embedded video on BuzzFeed.com, that would total just 6.34 million views. For the sake of argument, let’s use that 6.34 million number and look into where those other 44.14 million views come from.

The second “BuzzFeed News” Facebook page (4.57 million followers) posted just a 4-second clip that garnered 7,804 shares and 27,444 likes which sent users back to the “BuzzFeed Video” page. So that wasn’t it either.

BuzzFeed Video Facebook Channel metrics for Obama as of March 1, 2015.

Where the Views Really Came From

A quick Google search using the entire BuzzFeed Video headline shows a huge media bump from February 12 to 13, with media outlets linking or embedding the video on their sites. It wasn’t the tidal wave of social media shares on Facebook. Really, it was traditional earned media. Given it was the president doing a funny, self-conscious piece released just days before a key deadline, a PR push from the White House makes the most sense. Plus, it’s a fun, easy story for media to cover.

Here is the Guardian’s take on the Obama administration’s use of popular media — posted just over four hours after the video release.

“The current White House media shop has experimented with the presidential image before. Obama was the first sitting president to appear on a late-night comedy show, and the first to participate in online hangouts. In January, the president was interviewed at the White House by three young YouTube stars after he delivered his State of the Union address, which was published online in advance by the White House for the first time ever.”

Deanna Zandt, co-founder of Lux Digital and Advisory Board member of Social Media Week, noted the Obama administration has employed media partnerships to use humor to reach and motivate youth audiences to enroll in the health care exchanges. She gave the example of Jennifer Hudson’s spoof on the TV show “Scandal” produced by Funny or Die in September 2013.

Zandt wrote via email, “Stories like this — ones that are presented without their full, strategic background — make me kind of nuts. A lot of organizations see a phenomenon like this, and then think 50 million views in two weeks is a realistic goal. As a strategist, my agency then has to spend a lot of time explaining the relationships and investment it takes to reach those goals.” Recall, those gushing blog posts about the session came from professional strategists like Zandt.

Perelman did not attribute this record-breaking success to earned media. He attributed it to using a new form of video storytelling in a transformative era of people watching short content, such as in line in the morning at a coffee shop.

“A three act narrative arc, the format isn’t going to work in the three minutes [people] have until their soy latte is ready. But a three-minute video of the president that acts as a form of a list will. Which brings us to creating and consuming content for the world in which we live.” Perelman said, “We think a lot about when and where you’re consuming content.”

Why else does this matter? The PBS MediaShift audience knows all too well that traditional media are under massive pressure to get eyeballs and clicks to show how to monetize their digital content.

During the Q&A, an audience member asked Perelman why BuzzFeed chose to give Facebook exclusivity. After a pause, Perelman gave the following answer. It is worth transcribing given the context of the Facebook expanding its video functionality which is not afforded to YouTube links.

“Probably as not scientific as you’d think. We saw it as really great Facebook content; really something people would tag themselves and their friends in. That was really the reason. It was perfect content for Facebook. We often look at the difference of what Facebook does and Youtube does and how certain types of content spreads across the two platforms.”

Given their storytelling style is based on how, when, and why their users consume and share content, this not-so-scientific answer was surprising. Regardless, the goal (shares) didn’t really pan out.

Since the main BuzzFeed YouTube channel has 4.93 million subscribers and the combined six sub-brands total 7.48 million, why bypass a potential of millions of viewers with a high profile subject like the president? The social analytics consultancy SocialBakers reported at Social Media Week that on aggregate, large content producers and brands are leaving YouTube in favor of Facebook’s preferential treatment of their native videos, plus users spend more time there. Is further consolidation beneficial to the media and their audiences? Either way, financially-strapped media organizations are at the mercy of algorithms and other promotional priorities of social media networks — and search engines — for which they now have small, dedicated staff to “optimize.”

Later in the Q&A, when asked if posting content on third-party sites cannibalized their traffic, Perelman said:

“…People go to YouTube because they are looking to watch videos … [listing Buzzfeed subbrands] but they are still going to buzzfeed.com for quizzes and lists, and increasingly international and foreign coverage, political coverage, breaking news. One has not cannibalized the other. In fact it’s a rising tide. ” [Note no mention of Facebook with regards to third party video distribution.]

The earned media coverage in this case may have helped with branding, but it didn’t convert into those covered shares or any substantial “BuzzFeed Video” Facebook subscribers which is still less than their BuzzFeed News channel (4.57 million)  and their main YouTube video channel (4.93 million) Because the entire video was embedded on other media sites, users had no incentive to go to BuzzFeed.com. The call to action was to go to www.healthcare.gov.

So, who really won in this scenario? The president got a lot of play, and media outlets got a free, high-quality asset. This case of exclusivity to Facebook and using a third-party distributor doesn’t show big benefits to the content creator. In the future, would this pay off for media companies if they have an ad pre-roll? Is the general branding sufficient for marketing?

(I contacted Perelman for his response to this analysis but he did not comment yet. We will update the story if/when he does.)

Lastly, this case also brings up viral versus sharable content. SocialBakers also made this distinction describing viral is a short-term boost; whereas, sharable content is an organic process with a longer distribution. By my own example, I was off the grid on a vacation a day after the video release — February 13-17. Despite my mild addiction to Facebook and political content, I was surprised I first heard of it at Perelman’s presentation. Now I know why; it was (sort of) viral.

If you also missed it, take a look. Let me know if you share it.

Perelman’s full presentation is available below.

Jess Duda is a digital media producer and strategist most recently working for BillMoyers.com, Blue State Digital, and PBS Digital. She also held policy and editorial positions at the Council on Foreign Relations, IHS Jane’s 360, U.S. Institute of Peace, and the Center for Media and Social Impact.