Mediatwits #149: Lies and Viral Content: Can They Be Stopped? 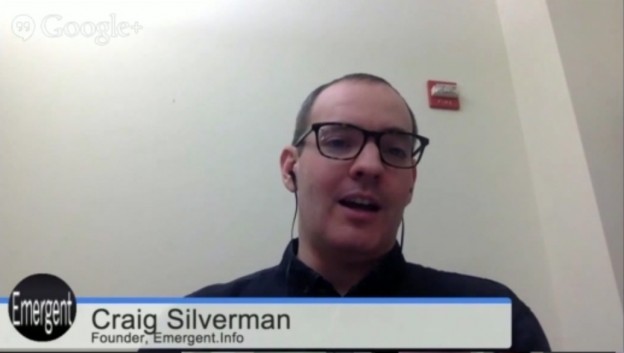 The Tow Center's Craig Silverman explains how journalists can prevent the spread of misinformation.

In journalism, it begins and ends with credibility. It’s what allows news organizations to rise above the noise of online chatter. Unfortunately, it seems that in the effort to chase traffic and capitalize on viral content, media companies are propagating misinformation far more often than they are debunking rumours. According to Craig Silverman’s report for the Tow Center, many news organizations don’t go far enough when reporting unverified claims. Once an unverified story gets picked up by the press, the public assumption is that it’s true. You might recall the errors in reporting the Boston bombing. But because hoaxes and rumours don’t need journalists to propagate, Silverman concludes newsrooms can’t just sit on the sidelines. We’ll talk about Silverman’s report on this week’s Mediatwits podcast with Craig Silverman, founder of Emergent.info and fellow at the Tow Center for Digital Journalism at Columbia University; Michael Calderone, senior media reporter at the Huffington Post; Jay Hathaway, staff writer at Gawker; and George Kelly, former editor for the Bay Area News Group. We’ll be joined this week by regular Andrew Lih of American University. PBS MediaShift’s Mark Glaser will host and Jefferson Yen will be producing.

Michael Calderone is the Senior Media Reporter for The Huffington Post and has previously covered the press and politics for Politico, Yahoo News, and The New York Observer. He’s discussed media issues on CNN, MSNBC, NPR, and Al Jazeera English. Calderone is also an adjunct journalism professor at New York University, currently teaching a course on media criticism. Follow him @mlcalderone

Jay Hathaway is a staff writer for Gawker.com, in charge of Gawker’s Antiviral blog. He is a former editor of the Daily Dot, Download Squad and Urlesque, and a former writer for The Daily What. He may have been the first person to tweet about twerking. You can find him @strutting

Craig Silverman is the founder of Regret the Error, a blog that reports on

media errors and corrections, and trends regarding accuracy and verification. Craig has been a columnist for the Toronto Star, Columbia Journalism Review, The Globe And Mail and BusinessJournalism.org. He’s the former managing editor of PBS MediaShift, and was part of the team that launched OpenFile.ca, a Canadian online news start-up. His journalism and books have been recognized by the Mirror Awards, National Press Club, Canadian National Magazine Awards, and the Canadian Online Publishing Awards. You can find him  @CraigSilverman

Some of Silverman’s suggestions to curb the spread of online rumors are surprisingly simple. For example, outlinking should be done after claims are verified. Even large media organizations have been taken in by hoaxes on fake news sites. Ubiquity, confirmation bias and a lack of refutation are what give rumours traction. Once they do gain traction, they’re hard to squash. In the case of the National Report’s Banksy hoax, many publications had to debunk the rumor before the truth was shared more than the hoax.

In the rush to cover breaking news, journalists can and do make mistakes. Sometimes the consequences of those mistakes can be severe. Perhaps, it would be wise for readers to follow John Dickerson’s advice following the Boston bombings: “The standard that fits the breaking news moment is to treat everything as provisional and accept the error inherent in the speed that you’re demanding.”

How do you approach the news you see on social media? What are ways you believe journalists and news organizations can improve? Do words like “reportedly” make you question the veracity of an article or claim?

One response to “Mediatwits #149: Lies and Viral Content: Can They Be Stopped?”