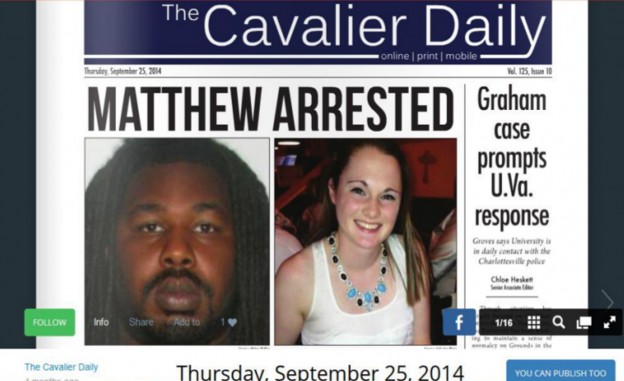 Screen shot of an Cavalier Daily article on the kidnapping of Hannah Graham.

Rebecca Lim first realized that the kidnapping of Hannah Graham, the 18-year-old University of Virginia student who went missing on Sept. 13, had become a national story when she began receiving emails and phone calls from major media outlets. “I had CNN calling me,” Lim, the editor of the Cavalier Daily, UVA’s campus newspaper, told me. “And that’s not something that usually happens. CNN doesn’t call me about the latest student council meeting.”

On a typical day, the Cavalier Daily, founded in 1890 and originally called College Topics, covers stories that rarely resonate outside the college campus — everything from graduates clerking for the Supreme Court to coverage of UVA’s sports teams. But occasionally an event relating to the university will suddenly capture the attention of the world at large, and Cavalier Daily’s staff finds itself beholden to millions of news consumers searching for any new developments in the story. Recently, UVA has been at the heart of two blockbuster stories: the kidnapping and murder of Hannah Graham and the Rolling Stone article depicting a brutal gang rape and the administration’s alleged failure to properly investigate it. With television networks and major newspapers descending upon the college town, the Cavalier Daily, with a staff of about 250 volunteer students, faced intense pressure to cover and break news.

But occasionally an event relating to the university will suddenly capture the attention of the world at large, and Cavalier Daily’s staff finds itself beholden to millions of news consumers searching for any new developments in the story.

The impact of digital

If these events had occurred only 20 years ago, when the news industry was focused much more heavily on print, the Daily’s coverage might not have had much impact outside Charlottesville. A reader in Portland, Oregon, who was interested in a UVA-related story would have either had to learn about it on the nightly news or through an AP story in the local paper. But with the emergence of web editions of college newspapers, readers from afar could get on-the-ground information from student journalists who were closest to the scene.

We saw this most prominently in 2007 in the wake of the Virginia Tech shooting in which 32 were killed and 17 injured. The Collegiate Times, the campus newspaper, was the first to report, in a brief web update, that there was a shooter on campus. In the days following, the newspaper achieved several scoops and was the first to release the list of names of those killed once the families had been notified. The New York Times linked to it on its website’s front page and the campus paper’s own website crashed underneath the traffic. Some argued it deserved a Pulitzer for its breaking news coverage.

The Cavalier Daily used to be a daily print paper back when Lim began writing for it the first semester of her freshman year of college. “Two years ago we switched from five days a week to four days a week,” she recalled. “And then the next year after that we went from four days a week to two days a week. We now print on Mondays and Thursdays.”

But the web version is updated daily, publishing about 100 new stories a week. On a normal day, it receives between 10,000 and 15,000 visits, about 30 percent coming from social media. While it was covering the Graham kidnapping, its traffic more than doubled, but that’s nothing compared to what happened when the Rolling Stone piece landed on November 19. “On November 20, we had 156,452 page views, and 165,000 November 21,” said Lim. “We averaged more than 100,000 views for three days after that.”

Because there’s so much competition and more pressure for immediacy when covering these national stories, the Daily’s normal editorial process can be upended for a more streamlined approach. Usually, writers are assigned to specific beats, and their stories are subjected to an editing process before they’re then copy edited and published. For the Graham and Rolling Stone stories, most were assigned to just a handful of senior writers. When those more experienced writers aren’t available to cover a piece of breaking news, the editors will step in. “You’ll have top-level editors making calls to police and administrators, interviewing students, and cranking it out in the moment,” she said. “And then one or two people will look at it and then it goes online. So the process and turnaround is a lot quicker.”

In the case of Hannah Graham, the newspaper’s staff first heard rumors that she had gone missing from friends and classmates. Once the disappearance evolved into a kidnapping case and then later an active manhunt for her kidnapper, a staff writer named Kelly Kaler, who had a longstanding rapport with local police, took over the bulk of the reporting. One of the main challenges the paper faced was resisting the urge to retweet and report on apocryphal rumors swirling around the case and the police investigation. “So rather than just jumping on the bandwagon, we waited it out,” said Lim. “We asked police sources to confirm, asked them to independently verify, and that ended up counting in our favor because we didn’t tarnish our credibility. We managed to maintain our high standards while keeping up with these national media outlets.”

The paper was performing a constant juggling act, not only covering new developments but also focusing on the campus response, both at the administrative and student level. This kind of coverage has been especially important in the weeks following the publication of the Rolling Stone article, as it triggered significant backlash not only against the Greek fraternity culture but also the university administration’s response to reported rapes and sexual assault. This was then further complicated by the continued unraveling of the Rolling Stone article, which began when it emerged that the article’s author, Sabrina Rubin Erdely, never reached out to or knew the names of the alleged rapists, and then further metastasized when the Washington Post and others found discrepancies in claims made by Jackie, the student at the center of the story.

“For the Rolling Stone article, we actually knew it was going to happen before it dropped,” said Lim. “We didn’t know what the reaction was going to be prior to the article coming out. We didn’t know if it was just going to fall under the radar or become as huge as it has been.” Obviously, it was the latter, and so then the staff had to decide on how to approach the fallout. I wondered if there was any discussion as to whether to seek out other victims who may have wanted to speak out about their own stories. But Lim said the staff didn’t want to start putting pressure on students to come forward. “It is really difficult to pester them for that when you’re a student here as opposed to when you’re an outside reporter coming in for a story. There’s something much more personal about this” for reporters who also happen to be students.

The Daily published one particularly important piece once the Rolling Stone story was falling apart and far-right conservatives used the revelations as an excuse to accuse Jackie of fabricating her entire experience. Emily Clark, Jackie’s suitemate freshman year, wrote an editorial stating that “Jackie’s story is not a hoax,” and she detailed the dark depression Jackie fell into after whatever happened to her that night in 2012. It was shared thousands of times on social media and cited by dozens of national news outlets.

Neither story is over, of course. The man charged with kidnapping and killing Graham still faces a trial and we’ve yet to get to the bottom of Rolling Stone’s journalistic failings. I asked Lim, who said she has no current plans to go into journalism once she graduates, whether her experience over the last few months had opened her eyes to the potential of journalism in ways that weren’t readily apparent to her when covering student council meetings and local sports. “How can you not see the power of journalism through this?” she replied. “What [college student] can say they’ve had a story that’s been read by 50,000 people on the Internet? It’s incredibly empowering but also comes with a lot of responsibility, and a desire to do it right, and to maintain that level of quality, and prove we’re capable of doing this. I’m really proud of the way our staff has come together so far.”