Closing the Divide Between Journalism Professionals and Educators 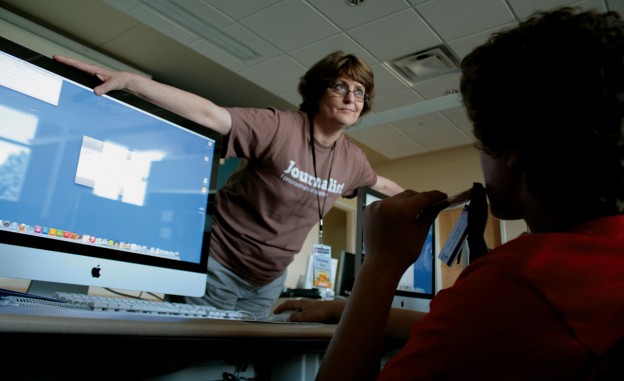 Photo by MoMoNWI on Flickr and used here with Creative Commons license.

There is an essential tension that occupies the space between professional journalists and journalism educators. Professionals who are siloed in either sphere can stigmatize or devalue the work happening in the other.

“There is so much mythology and lore on both sides of the fence. But the truth is, it’s not a dichotomy: good research needs to communicate, and good journalism is good research.” – Julianne Newton

This animosity is intensified by the constant push to assign blame for J-Schools falling behind on training the next generation of journalists. As the narrative about slow-moving, ivory-towered PhDs educating students for jobs that no longer exist persists, it’s also become en vogue for successful professionals to distance themselves from formal education, even wearing their lack of journalism degree as a badge of honor.

@BuzzFeedBen @NickTimiraos Literally was typing out that I don't need my bachelors degree for the job I do.

@NickTimiraos @katherinemiller I think almost half our politics team didn't graduate; I think they all attended.

But paving the way for what’s next in journalism should allow for an innovative and open flow of new ideas in both directions -– starting by strengthening relationships between working journalists and journalism educators.

Where does the divide come from?

By virtue of tradition and size, institutions often take years to make changes. When it comes to a rapidly changing field like journalism — where the tools could be long outdated by the time a curriculum committee comes around — the timing doesn’t work, says Eric Newton, senior adviser to the president, John S. and James L. Knight Foundation. For many reasons, most journalism schools did not rapidly revamp curricula as digital media soared.

There are other important barriers that slow progress. It’s exceedingly difficult to innovate if a school’s technology lags behind, and many programs don’t have funding to make the sweeping upgrades needed to get up to speed. Tenured professors have achieved a prized level of academic freedom, which can act a disincentive to stay engaged with developments in the field. Young academics often feel the pressure to publish and present their research, which can take years to come to fruition and is then often sealed behind a paywall.

The academic publishing model exacerbates the gap between journalism researchers and professionals working in the field. The mission of academic journals is also starkly at odds with the movements defining digital journalism: the push for open-source tools, open data sets, and making educational resources widely available to all.

It makes the field of academic publishing one that’s ripe for disruption, said Cindy Royal, an associate journalism professor at Texas State University.

“When you look at this publishing model where contributors are paid nothing but have to publish, then have their work walled off, you start to question the value of academic research,” Royal said.

Some say it’s an increasingly antiquated model propped up by rigid metrics for committees that weigh tenure decisions, and one that can make innovative academic research largely inaccessible to media professionals. Royal suggested one possible way forward could be to find ways to quantify a researcher’s impact on the profession and reconnect research with practice.

Royal pointed to prominent journalists who reach far more people than they ever likely would with a journal by publishing their findings independently and then promoting them on social media, or writing for publications like Nieman Lab, Columbia Journalism Review and PBS MediaShift, among others.

Perpetuating the view of research and practice as mutually exclusive is a disservice to higher education and the industry, said Julianne Newton, interim dean at the University of Oregon’s journalism school.

Academic research has led to important social understanding, including the influence of media in setting the public agenda, how communication flows affect discourse and audience reaction to messages. While not purely practice-related, such research is critical to understanding society and the media’s role within it, and more practitioners are paying attention to its value.

“There is so much mythology and lore on both sides of the fence,” she said. “But the truth is, it’s not a dichotomy: good research needs to communicate and good journalism is good research.”

Stop waiting for permission to innovate

Eric Newton isn’t interested in talking about immovable, old-guard professors and their red tape. He’d much rather talk about the driven instructors who are finding ways to innovate anyway, without waiting for the institution to change and make it easier for them.

For every topic, he can point to someone doing interesting work and trying new things, regardless of their university’s structure: flipping classes to make in-person meetings practice-based, inviting phones into the classroom to teach rapid research, and admitting they don’t have all the answers and inviting the class to help them solve problems.

He said the instructors having success are the ones taking it upon themselves to stay well versed in what’s next, blogging about their processes and trials, taking to listservs to stay connected to other educators trying new things around the country, and applying for grants outside the university.

“It is easier to stay up to date today than any other time in the history of teaching journalism,” Eric Newton said.

While he acknowledges that every campus and its particular set of challenges is different (so there’s far from any one-size-fits-all solution), many innovative teachers have focused their efforts on what’s within their control, rather than railing against engrained structural problems in the short term.

Robert Hernandez, a digital journalism professor at USC’s Annenberg School, summed up this urgency: don’t hesitate to hijack your school’s assets to selfishly improve your skills.

How else can schools fill gaps in expertise? Look to professionals.

“The best schools realize that having top professionals on hand is as important as having top scholars,” Eric Newton wrote in a Neiman Lab post. And bringing in “agents of change” can help ease cultural resistance inside the school and throw open the door for more change, he said in an interview with EdShift.

What professionals can — and can’t — bring to journalism schools

As schools begin to prioritize bringing in journalists from the front lines, they’ve looked for innovative ways to embed professionals in the educational experience. Some schools — Florida International University and the University of Southern California among them — have created “Innovators in Residence” programs to bring in prominent journalists to host workshops, visit classes and give public talks.

Julianne Newton said the program has created more flexibility for the whole system while bringing in journalists who work at the intersection of theory and practice.

Working journalists are most commonly found working as adjuncts, which generally comes with a lower time commitment, so they can carry on their work in the field. But because excellence in journalism doesn’t necessarily translate to excellence in teaching, Poynter is launching a training program for adjunct faculty, set to launch in early 2015, in partnership with Arizona State University’s Cronkite School.

Journalism schools are increasingly relying on adjunct lecturers, in part because they are less expensive than full-time staff (although the adjunct pool may be sorely limited in some communities). While they bring fresher skills sets, adjuncts’ lack of teaching experience is also a liability, which is where Poynter comes in, Kelly McBride, vice president of academic programs, said.

“It takes professors a long time to figure out how to effectively teach. It’s more than just imparting ideas — it’s taking students through the arc of learning and skills to apply in an appropriate context,” she said. “That’s a fairly sophisticated thing to be able to do.”

The self-directed online course will teach lecturers how to build a syllabus, implement a grading system and choose teaching tools.

It’s one more way to tangibly begin closing the chasm between journalism educators and working journalists. The big-ticket questions about the future of journalism shouldn’t fall squarely on journalism schools’ front doorsteps, but it’s clear that there are many unexplored avenues for schools to be better connected to working journalists. Because one thing is for certain: Students deserve better.

Katherine Krueger is an editor with the Guardian US Opinion section in New York. She is a recent journalism graduate from the University of Wisconsin-Madison and former Editor-in-Chief of The Badger Herald. You can find her tweeting frequently at @kath_krueger.

6 responses to “Closing the Divide Between Journalism Professionals and Educators”