A Student’s Perspective on High School Journalism in California 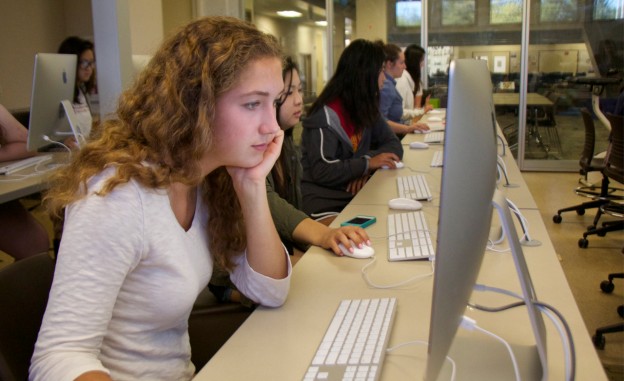 Having survived my senior year at Palo Alto High School, I think I can safely say that thus far in my education, the most useful thing I have done to develop my intellectual vitality has been joining my high school magazine, Verde. Although most high schools focus solely on a yearbook or a newspaper, Paly (as my California-based school is called by both students and teachers alike) has indulged its journalism programs: We have not one but five news publications of different varieties.

"The [journalism] adviser is like a coach. He advises, he doesn't compel." - Paul Kandell, Verde adviser

As a Paly student and a co-editor of Verde, I’ve had the chance to witness the effect of Paly’s journalism program firsthand. Verde typically spends about five weeks for a production cycle, during which staff writers will develop and write one- to five-page articles and will also be held responsible for designing their own layouts. The final product is a 72-page printed magazine that is mailed home to students and distributed to local businesses. In addition, staffers are required to go through the process of trying to sell ads.

What do students get out of Verde?

One of the primary goals of Verde is to foster a sense of unity among our staff members, which we do through a two-week “production.” Over the course of the two weeks, students work together after school and spend their afternoons and evenings working side by side in Paly’s Media Arts Center. During this period, we eat together, work together and hang out together.

“Part of the philosophy behind the program is that [by focusing] on establishing a community of community-based learners you will create an environment in which individuals will be motivated to do better work,” Verde adviser Paul Kandell said in a recent interview.

I believe that the process students undergo in Verde can play an instrumental role in providing them with important life skills. For example, making students go out and pitch a product to strangers — adults, no less — can help them develop increased confidence and teach them to take initiative. When I first started at Verde, I hated the policy, but I must admit it has made me learn to be resilient. (I only sold about one ad for every 10 tries.)

During my time as a staff writer, I put myself in situations that forced me to think critically about a variety of ethical issues. The first story I wrote was about transgender students. I was fascinated with the subject matter and was attempting to write in the style of literary journalism, describing the evolution of an anonymous source’s gender identity as my hook. I thought that what I had first turned in was pure gold. In reality it was incredibly insensitive and revealed a clear misunderstanding of the subject matter (misusing pronouns like “she” to describe someone who identified as a “he”). I got my draft passed back, covered in red ink. By the time the magazine was published, I had not only written a quality article, but also one that was sensitive, adhered to a variety of ethical standards (keeping my anonymous source anonymous, being understanding of what information he was willing to publish and using the correct pronouns and adjectives to describe transgender people). Not only that, but writing the story allowed me to become much more educated and aware when it came to gender and the LGBTQ community.

While not all Verde stories cover such sensitive subject matter, each one follows this sort of trajectory in which a rough draft is taken and molded by editors many times until it becomes a refined product. This has taught me that to create work I am proud of, I can’t just be satisfied with one or two attempts. I have to constantly revise and come at my writing and reporting from all angles before becoming satisfied that I have done a good job approaching the subject matter. And as a student editor, though I may no longer be as involved in the reporting aspect, I am required to confront the same issues, only on a much larger scale with everyone else in the magazine. Writing for a publication teaches students to hold themselves accountable for their work and to take ownership in what they produce.

“There’s something different about conducting research with [live sources] when you know that your work will be read by a large audience,” Kandell said. “You have to be responsible for both your words and the source’s words in a way you wouldn’t otherwise. It makes a huge difference.”

My fellow Verde staffers and I are lucky to based in a state which, under the California Education Code, grants high school journalists more freedom than those in any other state. As a result, Verde (along with all other Paly publications) has the ability to publish material regardless of whether our teacher or administration approves of it. Obviously we cannot publish libelous or false information, but this freedom enables us to write editorials and publish stories that may otherwise have been censored.

Another important aspect of high school journalism is allowing students to take ownership of the final product. From my experience as a student editor, this means putting many of the big decisions in the hands of the students (for better or for worse), a sentiment Kandell echoed.

Indeed, Kandell’s approach to advising is not unique to Paly but is, in fact, an underlying principle in the California Education Code. The CEC 48907 states that “student editors of official school publications shall be responsible for assigning and editing the … content of their publications” while the adviser merely ensures that the staff maintains proper reporting standards.

With both the Constitution and the CEC backing us up, student journalists in California have arguably the most freedom of any high school publication contributors. I feel that it is important that we students recognize the tremendous opportunity we are afforded in this regard and continue to take advantage of it to fully take hold of our rights to freedom of speech and press.