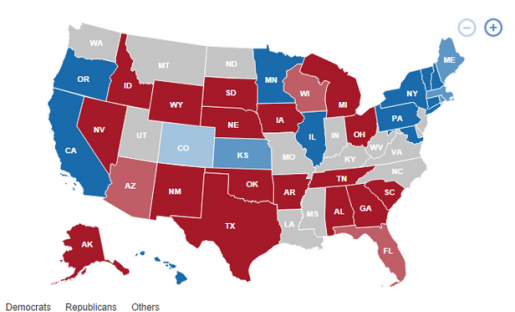 A look at the search engine Bing's predictions for the gubernatorial elections across the country. Screenshot courtesy of Bing.

With the 2014 U.S. midterm elections just days away, attention is on voter habits and concerns, as well as how political campaigners are leveraging different methods to target their voter base. The Pew Research Center’s recent report on how liberals and conservatives inhabit different media worlds underscores the influence media has on voter awareness. Reports have also shown how savvy campaigners have become — employing smartphone apps and data-driven research alongside old-school canvassing to appeal to a voter’s sensibilities — and how online video has become a force for marketing and name-shaming.

But, voters now also have more tools than ever to help them sort through all the information, spin or otherwise. This election cycle has grown a slew of online tools to track different issues, compare candidates and experiment with data to gain perspective against the onslaught of information. They follow in the footsteps of apps like PolitiFact’s “Settle It!” and Talking Points Memo’s “PollTracker,” both of which came out during the 2012 elections and have been updated with information for this year’s midterm elections. PBS MediaShift assembled a few of these online initiatives that level the playing field for voter awareness.

"On the opposite end of the politics feeding peoples’ perspectives, however, is a slew of online tools to track different issues, compare candidates and experiment with data."

Ahead of voting day, journalists at the social media news agency have been publishing an interactive video map twice a week showing where news has been trending. The point, according to Storyful’s blog, is “to help newsrooms find the signal amid the noise.” Users can zoom in to the different videos on the map to view them, or navigate through the campaign trail from the beginning on the video embed below the map.

Users can zoom in on the different YouTube videos populating Storyful’s interactive map to watch the news from that area, and the video and context for it will appear below. Screenshot courtesy of Storyful’s website.

The New York Times’ policy and politics venture Upshot, launched this past spring, has an election forecasting model called Leo that relies on data from different polls, fundraisers and other variables to predict outcomes. Now the Upshot has adjusted Leo’s settings so that users can see the effects of the different variables themselves and create their own election forecasts. It’s an interactive game of sorts, and the person who submits the best election forecast has a chance at winning what the Times calls “the coveted Upshot Cup for Excellence in Election Forecasting.”

All the original polling data used in the Upshot’s election forecaster Leo have been removed so the user can manipulate the data herself and see the influence of different variables. Screenshot courtesy of the New York Times’ website.

National Journal has brought its “Hotline Race Tracker” — previously available only to members — in front of the pay wall these past couple of weeks before the elections. Audiences can look at different aspects of campaigns state-by-state and race-to-race, and the Race Tracker will show everything from campaign finance and issue rankings to candidates’ election histories and social media presence. According to the Journal, the Race Tracker uses “more data points than any other similar tool” to give the most comprehensive look at the elections for anyone who wishes to follow it closely.

Similar to the National Journal’s Race Tracker, Bing has also released a comprehensive guide to the elections at bing.com/elections, where users can search through different maps, up-to-date predictions and personalized “Voter Guides.” “Politics aside, our goal with Bing Elections and the personalized Voter Guide is to arm voters so they can make decisions based on the most comprehensive and best information available,” Bing wrote on its blog.

This free browser plug-in developed by 16-year-old Nick Rubin follows the premise, “Some are red. Some are blue. All are green,” to draw attention to the role of money in the elections. The plug-in highlights the names of different Congress members on any webpage, and when one hovers the mouse over the name, a box pops up showing the amount of funding the candidate has, and from which sources. The data is taken from OpenSecrets.org. Although Rubin is too young to vote, he told the Washington Post that the scale of the problem made it necessary to have this information more publicly available and accessible. “Even kids my age are able to see this data and recognize it’s a problem; we’ll be growing up in this political system,” he told the Post.

With Greenhouse’s browser plug-in, the names of different Congress members are highlighted on any webpage, and information on their funding sources are readily available. Screenshot courtesy of the Washington Post.

One response to “5 Great Online Election Trackers for the U.S. Midterms”