Why Your Tablet Magazine Isn’t Getting Any Better 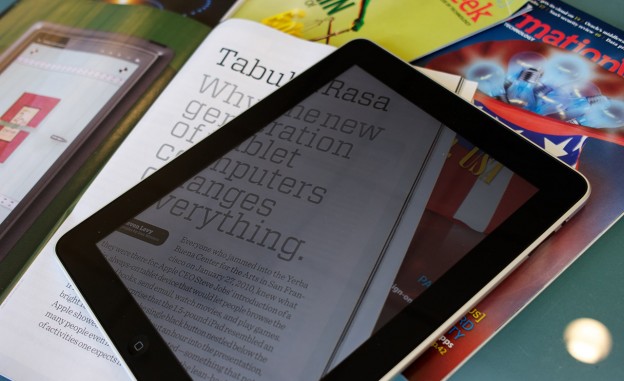 Photo by Chengyin Liu on Flickr and used here with a Creative Commons license.

I looked at my first tablet magazine in 2010. With a few exceptions, the ones I look at today aren’t all that different now than they were then. For the most part, they are magazines that look and navigate like print editions with some “enhanced” elements – an interactive graphic here, a video there. Phones get bigger and digital audiences keep growing, but magazine publishers can’t seem to create a digital product that people want to pay for.

Four years in Internet time is forever. Facebook, Twitter and YouTube all launched within less than a four-year period, and none of those sites looked or worked the same for very long. Yet tablet magazine innovation sputters. I spoke to some industry experts to determine where magazine publishers got stuck. (I tried to talk to publishers too, but they were not as responsive to my queries about why their digital editions sold so poorly.) Here’s what I found.

“It’s an additional distribution source for publishers to sustain rate base in order to maintain and grow their revenue.” - Robin Steinberg

Designer Joe Zeff created some of the earliest tablet magazines and is now vice president and executive creative director for mobile developer ScrollMotion. The first iterations of tablet magazines, he told me, were just early releases on new technology. “That’s not a reason to declare tablet magazines a failure, but a first step in what they will be in the future,” he said.

A successful tablet magazine requires a complete restructuring. “It makes no sense to me that Conde Nast and Hearst, with so many titles, have been unable to present consumers with the opportunity to mix and match from those titles,” Zeff said. “That type of curation is what we do every day with our Facebook and Twitter feeds. We pick and choose where we’re going to get our information and if there’s something we don’t like, we mute it.

“Rip off the covers off of their magazines and let the consumers choose what they want. The idea that everyone gets the same magazine makes no sense to me.”

Layering enhanced content on top of a print-centric magazine doesn’t take advantage of the tablet itself, write Drake University’s Jeff Inman and Jill Van Wyke in paper published in the the Journal of Magazine and New Media Research called “We Were Promised Jetpacks: The Digital Magazine Non-Revolution and the Waning Promise of an Enhanced Content Explosion.”

“Active touch makes a digital edition feel native,” they wrote. “Touchscreens create the expectation that you can interact not only on the individual buttons, but on the screen’s canvas itself. As brands transition from a print-focused model to a digital-centered model, they must give readers an experience that allows users to use the whole screen.”

What sets a tablet apart from any experience is the potential interaction between reader and content, Inman said in a recent interview. “Is there a way to present things with touch?” he asked. “Obviously, that’s why anyone’s reading anything on the tablet. They want to touch it.”

Tablet magazine content disregards the device’s unique capabilities, Zeff agreed. “Location awareness. My tablet knows where I am, how warm it is,” he said. “My magazine should be able to leverage that kind of information.”

But really, it’s about revenue

So the kind of experience that might actually appeal to users, the kind that’s updated more than once a month or draws on a brand’s deep content trove, is discouraged by the publishing industry itself.

“Publishers view this as revenue,” said Robin Steinberg, the executive vice president, director of publishing investment and activation at powerhouse buyer MediaVest. The replica tablet edition, she told me, allows publishers to use an existing product to support their numbers, even if only by the barest percentage of total circulation. “It’s an additional distribution source for publishers to sustain rate base in order to maintain and grow their revenue.”

If publishers are unwilling to pursue business models that don’t revolve around rate base, innovation suffers. As a result, tablet editions are still replicas and make up only 3.8 percent of total paid circulation, according to AAM data. What excited readers in 2010 just bores them in 2014.

“Unfortunately, four years later, interest is low from the consumer and marketer for this form factor,” Steinberg said. “So the challenge is, how do they innovate and rebuild a product to create increased value and deliver a more meaningful user experience at scale? That’s yet to be determined.”

“The economics of print make it harder and harder to justify. It doesn’t offer the same economic benefit as delivering something digitally,” he said. “If publishers find the right mix of content and utility that excites consumers, it’s a win for everybody. It’s in their interest to make it work.”