The Rise (and Fall) of Female Editors 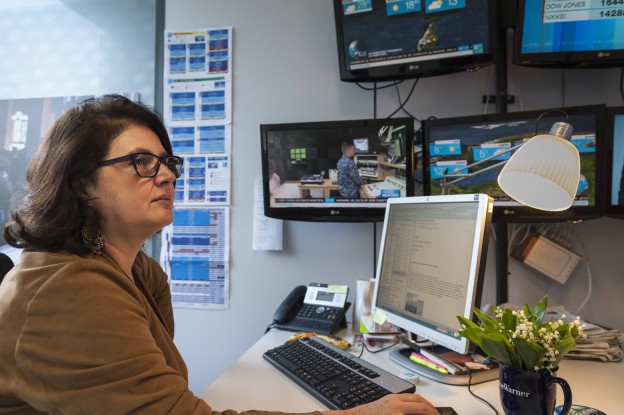 A woman at the helm of a French newsroom. Francoise Champey Huston is deputy director of France 24's English channel. Photo by Tim Anger.

In partnership with the Paris-based World Editors Forum, WAN-IFRA Research Fellow Julie Posetti reports on the sixth trend in our Trends in Newsrooms 2014 series. Read the other installments here: Part one, part two, part three, part four, and part five.

The high-profile and unexpected departure earlier this year of two of the world’s top women editors — Jill Abramson, executive editor of the New York Times, and Natalie Nougayrede, editor-in-chief of France’s Le Monde — within 24 hours of one another has sharpened the focus on the success and failures of gender equity management in newsrooms worldwide.

“I’m hoping that someday, the idea of discussing ‘Where are the women?’ in journalism will seem completely unnecessary. But we’re not there yet.” -Margaret Sullivan

As the details of Abramson and Nougayrede’s departures emerged, it became necessary to ask whether the advances recently recorded at top flight newspapers are real and sustainable, or if progress in newsroom management gender equity is, in fact, as fragile as male dominance is established to be entrenched.

Appointed the first woman executive editor in the NYT’s 160-year history, Abramson, in particular, left a significant legacy through the development and promotion of senior female editors in her newsroom. Elisa Lees Munoz, executive director of the International Women’s Media Foundation, explained the impact of Abramson’s dismissal on media and gender debates:

“We may never know what is behind the firing of Jill Abramson. What we do know is that women make up less than a quarter of top management positions and less than a third of governance positions in U.S. news media, according to the IWMF Global Report on the Status of Women in the News Media. This paucity of representation makes each one of the representatives mean much more – both when they rise and fall,” Munoz told the World Editors Forum. And falling is a familiar pattern to victims of the “glass cliff.”

Internationally, research indicates that women remain badly under-represented in news management and poorly represented — subject to stereotyping and dramatically under-quoted as sources — within news content. A recent UNESCO report found that, worldwide, just over a quarter of senior media management positions are occupied by women. In Australia, only 12 percent of major metropolitan editors-in-chief are women, according to research conducted in 2013 by the Women in the Media project (on which I worked with fellow Australian journalism academics Wendy Bacon and Jenna Price). The picture is even worse in the U.S., where the American Society of Newspaper Editors reports that only 10 percent of “supervisory or upper management” positions in newsrooms are occupied by women. And in the U.K., the figure is just 16 percent. Meanwhile, research in South Africa indicates that 31 percent of national newspapers are edited by women. These findings were also echoed in research recently published by Nieman Reports.

Despite the grim picture, at the New York Times, before Abramson’s sacking, there was evidence of significant change in the ranks of senior editorial management.

“…There is a generational shift going on and the available pool of talent in the future may be dominated by women rather than men,” Janet Elder told me before Abramson was fired. Elder was promoted to deputy managing editor in 2013 and she is now the most senior woman in the Times’ newsroom following Abramson’s dismissal.

“We are fortunate that Jill Abramson … and Dean Baquet, the managing editor [now installed as the NYT’s first African American executive editor, in place of Abramson], have made an effort to promote talented senior women in the newsroom to the management ranks,” Elder said. “In addition to serving on the masthead, there are now women running major departments and areas of news coverage — Washington, National News, Culture, The Book Review, Science and Technology.”

In fact, prior to Abramson’s dismissal, the Times was celebrating a milestone, having finally achieved 50 percent female representation among its top editors.

In an interview she gave to the World Editors Forum just before Abramson’s removal, Elder argued that there was a process of dramatic change under way at the Times, reflective of shifting newsroom demographics and strategic management.

“In the past, men have been more likely than women to be assigned to some of the most coveted jobs in journalism — foreign posts, political campaigns, investigative reporting. These jobs, in turn, often propelled the men who held them into senior roles,” she said.

“Currently, in our own newsroom, some of our most dangerous reporting assignments — Jerusalem, Beirut and South Africa — have all been given to women, some with young children. That in itself is a sea change.”

However, the Women’s Media Center’s (WMC) “Status of Women in the US Media: 2014” report found that the New York Times had the lowest rate of female bylines of the top 10 U.S. newspapers — with 69 percent of bylines belonging to men.

This is a problem that Abramson publicly acknowledged and had promised to address. In an interview with WMC researchers, she also pointed to the paucity of women applicants for newsroom technology jobs as a growing problem that needed attention, as newsrooms increasingly integrated editorial and technology roles.

Hilly Janes, writer and former senior executive at U.K. titles The Times, The Independent and Prospect, attributes the problem of women’s under-representation in senior editorial roles in Britain to the working environment in newsrooms, where the more demanding roles require employees to work long, irregular hours — making it hard to juggle work with the primary care roles on which women continue to take the lead. “[W]omen who take career breaks can lose confidence, and with the advent of ever-changing digital and social media it is much harder to keep up, which saps their confidence even more,” Janes said in an interview with the World Editors Forum. She pointed out that areas with more “family-friendly hours” are far more likely to have “women dominating at every level.”

Janes echoes the views of Head of Operations at FT.com Lisa MacLeod — a former Financial Times managing editor — who is balancing a high-profile media management career with motherhood.

“As a newcomer, and a late starter to motherhood, I do suddenly understand why so many women seemingly disappear after having children … My female colleagues [who] have not had families progress forward and upwards. Those [who] do have to make choices: these involve compromising seniority for fewer working hours, reduced working weeks, child-friendly hours,” she said in an email interview with me. “This might only happen for five years or so, but that’s enough to amount to a serious setback in terms of career progression. Even the most supportive organization cannot erase the effect of these choices on their female employees’ progression.”

Nevertheless, if news organizations are serious about promoting women to senior editorial positions, more flexibility is required to accommodate women with children, according to MacLeod. “I think companies could be more flexible in working out the best way to handle mothers in organizations. One thing I do know for sure is that you can’t underestimate the effectiveness of a woman juggling a family and a career: Because time becomes so limited, these women are functioning on full power throughout the working day. They may not be there for 14 hours, but you are getting eight hours of serious work out of them, and they are formidable multi-taskers.”

Elder heads the New York Times newsroom’s Career Development Committee, which focuses on diversity, inclusion and women’s career progression. She acknowledges that there are still gender barriers to be overcome at the Times.

“We still wrestle with some structural issues that seem to keep more women than men from wanting to move into the editing ranks of the newsroom,” she said. And she indicated that structural change might be necessary: “Many of our editors are tied to the print production schedule, which means they have less control over their time than reporters do. For some, that is a formidable obstacle. We are starting to look at how we might experiment with scheduling.”

The ongoing need to ‘lean in’

Echoing Sheryl Sandberg‘s “lean in” principle, Botswana newspaper publisher Beata Kasale said in an email interview with me, “Women must make themselves visible. The media is about visibility. If they take a back seat, nobody will know that they are there. They should be more assertive.”

Kasale is publisher and former editor of the Voice, one of seven Botswana media organizations that recently united to devise and introduce a common gender policy designed to mainstream newsroom equality. She said that in African newsrooms, “Women are missing in key positions of leadership … Although there are a few women working as journalists, most are in clerical, cleaning, distribution and advertising departments.

Her advice: Women “should be more assertive. At the Voice women occupy the top positions — publisher, editor, advertising and marketing director, operations manager, advertising manager and sub editor are all women. In the newsroom the photographer is a woman.” Although Kasale describes women editors as their own worst enemies — “Once in power they forget about gender mainstreaming” — she acknowledges the impact of unequal caring responsibilities on the career progression of women with children. “Male managers should ensure there are policies in place which accommodate the needs for women to take care of children, as in most cases the male managers leave these duties to their wives too,” she said.

NYT’s Elder also highlights the importance of strategically managing women’s progression in newsroom. “It is critical that we and other news organizations remain aggressive about putting the next generation of women leaders in place now so that they are ready when their time comes,” she said.

As the New York Times’ Public Editor Margaret Sullivan wrote recently “I’m hoping that someday, the idea of discussing ‘Where are the women?’ in journalism will seem completely unnecessary. But we’re not there yet.” Not by a long shot.

Note: You can read this article in full, including a section on video tips from experts, in the report Trends in Newsrooms 2014. The report, edited by Julie Posetti, is available here (free to WEF and WAN-IFRA members, available at a charge to non members). In part one of this Trends in Newsrooms blog series, we provided an overview of the top 10 newsrooms trends of 2014, in part two, we profiled the urgent need to shield journalism in the “Age of Surveillance.” In part three we addressed the rebooting of mobile strategy. The fourth installment of the blog series featured trend three: Back to basics with social media verification. The post on trend four: Analytics – when data drives the newsroom is here. And trend five: Newspapers begin to challenge broadcasters in online video storytelling is here.