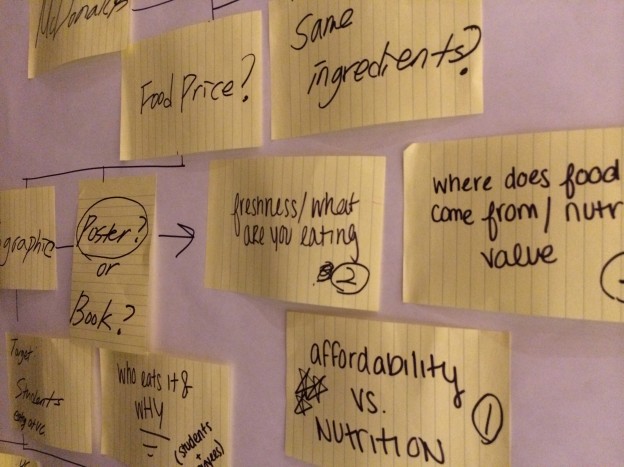 Photo by Irwin Chen. Post-it notes serve as a tool for journalism students as they explore new modes of thinking in the Journalism + Design Program.

Since September, I’ve been director of a new program at The New School called Journalism + Design. I’ve been fighting to get this program off the ground for more than four years, and now that it’s here, I exist in a state of constant terror.

I can explain with ease what we’re trying to do with the program, and I believe down to the soles of my feet that what we’re doing is important and right. We think design is a natural ally of journalism and could be a crucial part of helping journalism flourish in today’s vastly complex and competitive media ecosystem. We think it can help us forge a participatory journalism that puts the people we serve first.

Increasingly, I find myself thinking that my most important task is to help students become comfortable with discomfort.

And I’m hardly the cowardly type. The year before last, I discovered a robber in my house and my reaction was to grab him by the collar of his shirt, shove him up against the wall and wrestle him until he dropped my things. Then, I chased him out of the house and down five city blocks until an off-duty cop showed up and tackled him.

So why this new fear of my own classroom?

Journalism + Design is about experimentation and innovation. That’s the whole reason we started this thing — to build a community of forward-thinking practitioners and students who want to invent what journalism could be like in the future. In other words, I’m asking our students to do things they’ve never done before. But what I perhaps didn’t realize is this means I’m doing things I’ve never done before.

And based on the way my heart pounds before each class starts, I realize that a big part of my job — as I ask students to jump into the messiness of the creative process with me — is to help them manage fear.

I sent the students out into The New School’s new cafeteria — the first one to serve the whole university. Listen and observe, were my instructions. Talk to people and report on what they said were their problems.

The next class we brainstormed. Post-it notes and all. Then we synthesized until we had a few key points that emerged over and over. By physically grouping like ideas with like ideas, the class rapidly honed in on the most essential points. It was amazing to observe.

Next, I broke my students into teams and asked them to come up with a package of written stories and photographs. What they produced was to be presented in the cafeteria for people who used the cafeteria. I told them to think about the context of where their work would be consumed and to focus on impact and engagement  — but other than that, their job was to push themselves outside of their comfort zones, to imagine solutions I would never have thought of.

This is certainly not how I learned to report.

Then, last week, my Journalism + Design partner at Parsons, Irwin Chen, and I merged his editorial class with my journalism class. We divided our students into teams and gave them two weeks to learn from each other first-hand how design informs journalism and journalism informs design.

It wasn’t just me who was nervous. The students were nervous. I could tell. There were lots of giggles and eyes looking to me for guidance. But then we started talking. My students listed what were the most important things about journalism. My chest swelled with pride. My colleague’s students talked about what went into good design. Heads started nodding. Eyes focused. And lo and behold: when we broke into teams, they started using all the techniques we’d been working on all semester to come up with some genuinely interesting ideas.

And yet, when I think about next week’s class, I get the fear all over again. Because I don’t know what will happen. I am not in control in the way I’m used to being in control in the classroom. I have to give in to the nature of experimental work, which is that you don’t know what’s going to happen. I have to let myself be vulnerable and drop the pretense that I have all the answers. And suddenly I get why all those people are still teaching journalism the same old way. Change is scary. Being vulnerable in front of your students is scary.

Photo by Irwin Chen. Journalism students and design students collaborate on a project in the new Journalism+Design Program.

Journalists are required to master a lot skills these days. They have to be adept at video and audio, as well as writing. They should know some coding, how to deal with data — the list gets bigger every year. But increasingly, I find myself thinking that my most important task is to help students become comfortable with discomfort. If my students are to become the journalism innovators of the future, they can expect to be surrounded by uncertainty, fear, and failure all the time. They’ll never know where they’re going until they get there. And then when they’ve gotten there, it’s likely everything will have changed and they’ll be back to innovating.

I have a friend, a technology entrepreneur, who says that when your gut is twisted with fear, it means you’re doing something right. That means you’re pushing yourself into new territory. I pass this on to my students, in their more panicked moments. And I pass it on to myself, in mine. To be honest, it’s much easier beating up robbers.

Heather Chaplin is an assistant professor of journalism at Eugene Lang College, The New School for Liberal Arts, and the director of the Journalism + Design Program. She is the author of Smartbomb: The Quest for Art Entertainment and Big Bucks in the Videogame Revolution, was a Knight Foundation Prototype Grant recipient to develop playable models of complex issues in the news, and recently received a $250,000 grant for Journalism + Design from the Knight Foundation. Her work has appeared in The New York Times, All Things Considered, and numerous other places.