Inside ‘The 9/11 Project’: How Visual Storytelling Helped Tell Children’s Stories 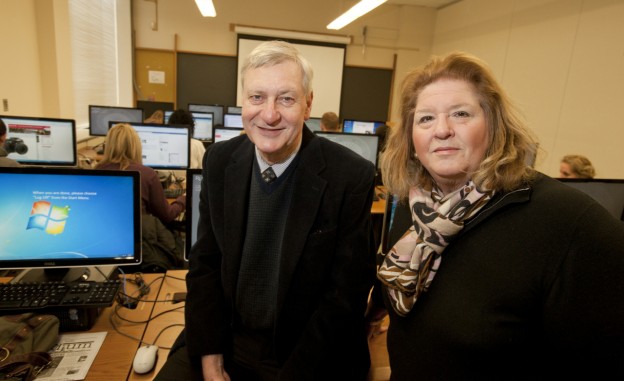 The iBook comes after a 9/11 Project course was offered in the spring of 2011, first imagined by former Rutgers professor Ron Miskoff and New Jersey Press Association Executive Director George White in a hotel lobby. A grant from the NJPA allowed Miskoff and co-author Liz Fuerst to conduct the narrative journalism class in exchange for the content it produced and came just as the NJPA looked ahead to the 10th anniversary of 9/11.

“It was only when they went out there and actually did the interviewing that they really learned what it’s like to tell a compelling story." -Liz Fuerst

“They came to us with a proposal to create reportage about 9/11 New Jersey victims so that they could give content to their member newspapers and websites, and we gained the opportunity to do narrative journalism,” Fuerst said.

The course drew so much enthusiasm that the department was eventually forced to cut off enrollment. After a process of acceptance that included a written essay, students spoke with children who had lost loved ones in the World Trade Center attacks and produced a multimedia collection of narrative, photo and video stories.

“What you see in the iBook — with some editing, of course — is the raw material: what they filmed, what they found, what the children told them and what surviving parents told them,” Fuerst said. “That is the raw journalistic experience.”

Fuerst believes it is this real-world experience that makes the difference for students.

“We could teach narrative journalism and have students do their own narrative writing and read all the books about narrative journalism, but it was only when they went out there and actually did the interviewing that they really learned what it’s like to tell a compelling story,” she said.

However, real-world experience was coupled with real-world challenges. Before the students could even begin to grapple with emotional interviewing, they had to identify families willing to be interviewed. Fuerst estimates that they went through a hundred families simply to find the 21 whose stories were eventually published.

“They [families] were found through word of mouth, through a friend of a friend,” she said. “It was very, very challenging to find families who would open up the way these did.”

Once families were chosen, both Fuerst and Miskoff expected challenges associated with sensitive subject matter.

“We anticipated that students would have trouble grasping the concept, which turned out to be unfounded,” Miskoff said. “They grasped it very well.”

Additionally, Fuerst and Miskoff prepared their students by providing informative books on 9/11, presentations from health professionals and a box of Kleenex when interviews became tough.

As the children of 9/11 were reflecting on growth over the previous 10 years, the journalism students were experiencing improvements of their own.

Though the Rutgers students had already proven their writing ability, their photography and video skills were less polished. In response to this realization, Miskoff, a former professional photographer, conducted several classes on visual storytelling.

“The problem with journalists is that they’re writers. They don’t usually think visually as a role,” said Miskoff. “So the course really helped them to understand to take pictures and videos.”

“We wanted to give our students the opportunity to do a difficult interview,” she said. “It’s different.”

In addition to tactical skills, Miskoff hopes that the experience will serve both the J-School students and children of 9/11 as they continue to learn and grow.

“It was great for the students. A lot of them have written to me and said it changed their lives,” he said. “And I hope it was as good for the children of 9/11, as well.”

With the release of the new iBook, launched in May, Miskoff and Fuerst hope that both the book and course will serve as teaching tools for educators.

For Fuerst, the idea of using real-world experience as a teaching approach was fundamental to this project and an important strategy for educators to consider.

“We are responsible to give [students] to the tools to get a job,” she said. “If they’ve never worked for a campus newspaper or they haven’t had an internship, they’re not going to have a portfolio unless we give it to them.”

In terms of technology, Miskoff encourages educators to experiment with e-books and other ways to present stories interactively.

“It’s really not hard. When older people think about these programs that are coming out, they think of the difficulty of these programs,” he said. “In fact, I think as time goes on, these programs get easier and easier and are more inclined toward somebody who does not have a technical background.”

As 9/11 anniversaries continue to come and go, Miskoff thinks the book can be used to tell a story that is too often expressed using only numbers and not names.

“9/11 is probably the biggest story of the decade, maybe even the first part of the century,” Miskoff said. “And I think the book will help to personalize the story. It will help people to understand that this was not about a number of people who died, it was about individuals — people who had children and wives and husbands and families and were missed.”

Visit the 9/11 Student-Journalism Project website for more information on the project or to view the complete archive of stories. The multi-media book can be purchased on the iTunes Store.