What If the New York Times Ended Its Daily Print Edition? 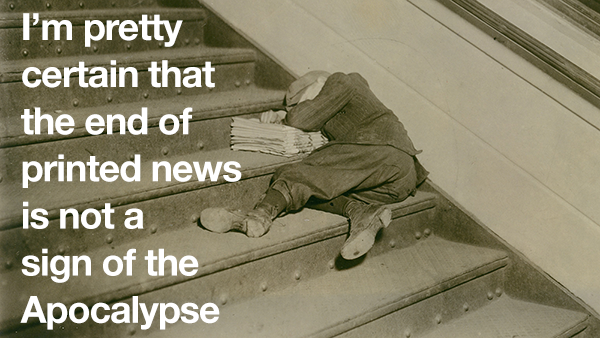 "Newsboy asleep on stairs with papers, Jersey City, New Jersey," Lewis Hine; via the Open Access for Scholarly Content program of The Metropolitan Museum of Art.

Stop the presses! For six days a week!

"If the Times Co. needs help, then it’s of course likely that most other newspapers still are struggling to adapt to 2014 and beyond."

The recent New York Times “Innovation” report, a meant-to-be-internal strategy document proposing a (long-overdue) digital-first future for what is arguably the best newspaper and digital news operation on the planet, painted a depressing picture.

Despite beefing up its digital business and creating large technology and R&D teams to help the iconic news company lead the digital way and depend less on its print edition and more on emerging digital initiatives and opportunities, the report, produced by eight NYT employees, identified cultural and institutional barriers to getting beyond a “print-first” mentality. In other words: The company is going to falter if it doesn’t put digital first and dump the anachronistic mindset of “the print edition is still king.” (Newspaper-industry print revenues are not likely to pull out of their steep dive — ever.)

Still. In 2014. This is the situation at what many observers view to be the newspaper industry’s “digital leader.” If the Times Co. needs help, then it’s of course likely that most other newspapers still are struggling to adapt to 2014 and beyond.

Strategic foresight is on the case

I’m going to share a “strategic foresight” (also called “future studies”) exercise with you: a “Futures Wheel” that I created which examines how a particular change might play out. In this case, the hypothetical change is for the New York Times to at some point in the near future stop printing and delivering daily printed newspapers (but retain its Sunday print edition) and focus most of its resources on digital products and services.

Here’s the futures wheel for the no-more-daily-print-edition New York Times. Start at the middle (black box, the proposed change) and go out in spokes to see the various first- and second-level consequences that this change likely will have. Green indicates positive elements likely to gain revenue; red indicates where revenue and/or jobs are likely to be lost. Let’s discuss it after you’ve had a chance to look over it. (Also know that a “futures wheel” is one of many tools in the foresight professional/futurist’s bag. It’s useful in this case to think through the consequences of a significant organizational change.) 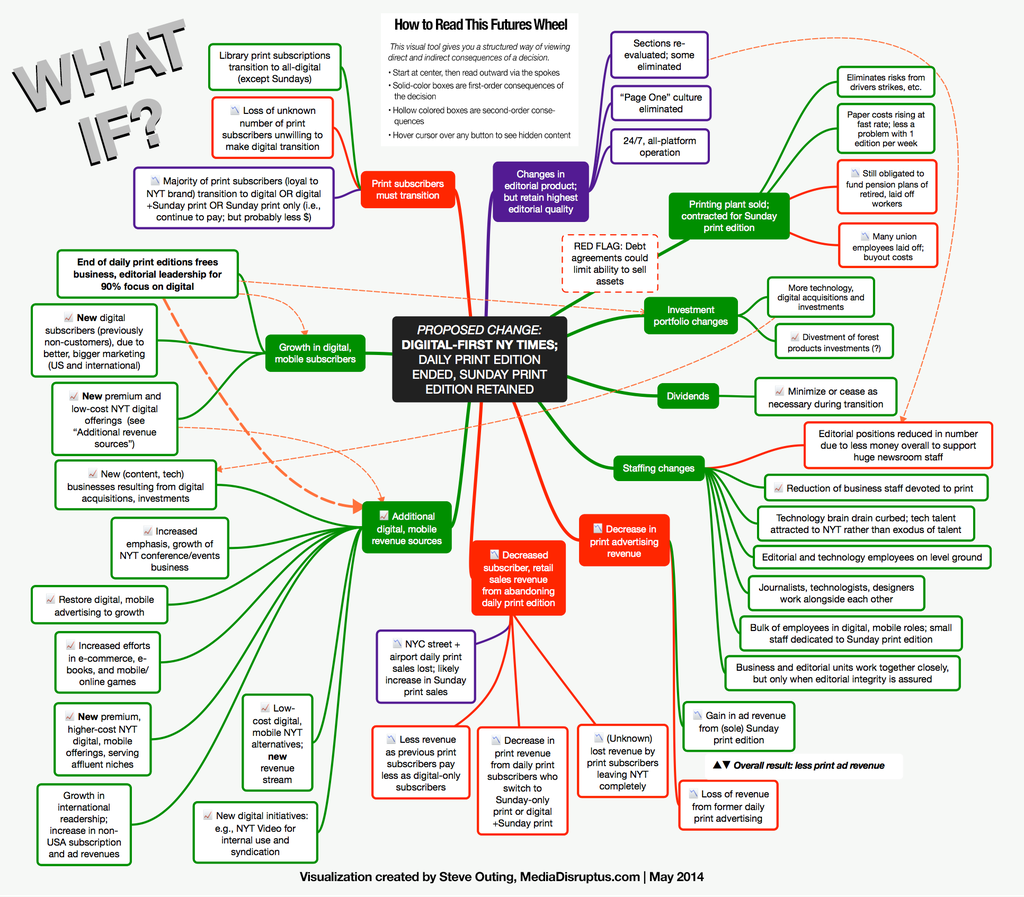 Good. Let’s state the obvious first: That’s a lot of information to digest. But I went through this exercise to demonstrate one of the tools of strategic foresight that can be useful in analyzing a proposed change in business strategy. In this case, it’s a radical change (at least for a historic company like the New York Times). The process of projecting the consequences of such a change can give you an idea of what to expect and better inform the strategic planning process.

In this example, you’re seeing my comments based on my own knowledge of newspapers and media business models, and two decades-plus of work at the intersection of digital technology and news. A proper futures-wheel exercise would involve interviewing and surveying many affected parties within and outside of the news company.

And I took this out to two levels of consequences. If this were done for the Times as part of a paid foresight project, it also would be necessary to go out to a third level of consequences, and perhaps further.

What does the wheel say?

Since that’s a fairly information-dense visualization, I’ll make it easier on you and offer a bullet list of what this exercise indicated about the Times Co.’s likely futures if it made the bold decision to go digital-centric, kill its daily print edition, and continue publishing a Sunday edition on paper.

(This article was published originally at Media Disruptus.)

Steve Outing is a media futurist, news innovator, digital-media and strategic-foresight consultant, journalist, and educator, based in Boulder, Colorado.

One response to “What If the New York Times Ended Its Daily Print Edition?”