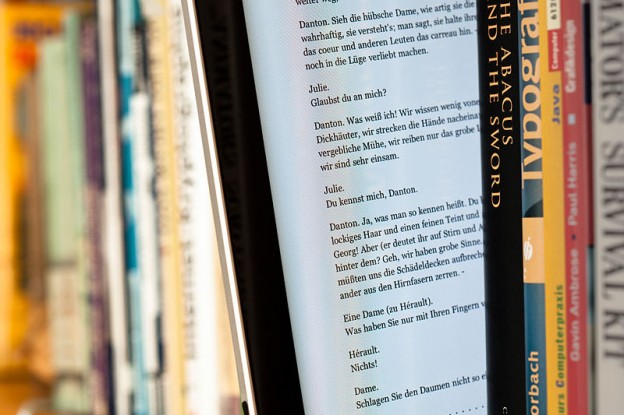 After a fantastic BEA (Book Expo America), I’ve been digesting the whole Amazon/Hachette battle. I’ve basically come to the conclusion that it’s an incredible time to be a self-published author.

The first thing that surprised me is that so much has been misreported about the Amazon/Hachette battle. Amazon and Hachette are negotiating their contract terms, and what normally should have been behind-the-door talks is turning into an all-out flame war in the media.

"Amazon and Hachette are negotiating their contract terms, and what normally should have been behind-the-door talks is turning into an all-out flame war in the media."

Amazon can’t increase prices. Amazon acts as a retailer of books. The publisher always sets the price of the books. Amazon only changes the amount of the discount similar to the way Walmart, Target or anyone else would.

No, Amazon didn’t remove any buy buttons. They just removed pre-order buttons from Hachette titles. Amazon doesn’t make pre-order buttons available to everyone and negotiates with each publisher individually. Readers can still buy their books albeit with delays as posted in the Amazon forums.

c) Amazon is a monopoly.

This is a ridiculous notion because if they really were a monopoly the government would order them to break up. If anything, they’ve gone down in market share over the years as other players have entered the field (Barnes & Noble, iBooks, Kobo, etc). Best-selling author Hugh Howey has a great post on his blog about it.

Book publishing has changed drastically in the last few years. It’s easier than ever to get a book out into the world. All the resources you need to publish a book are available you. You no longer need to go through the traditional gatekeepers (publishers) to publish a quality book. Publishers controlled everything from pricing, inventory, printing and distribution, ultimately controlling what we read.

History shows that in the age of tech giants and their battles, the biggest giant is always the enemy because they have the biggest market share. Right now Amazon is that enemy. During the heyday of Barnes & Noble, they were the biggest enemy because they put all those great indie bookstores out of business. However, back then publishers were able to control their sales because they could pay top dollar for spots that got higher visibility in areas that were highly trafficked. By buying these prime spots they were able to manufacture best-sellers.

The transition to digital changed all that. Sony e-readers preceded Amazon but Amazon out-executed by solving the problem of sending a book to your device with a click of the button. The send-to-Kindle feature blew Sony out of the water (not to mention having such a huge inventory of titles).

Things we have forgotten

a) Publishers don’t care about readers.

Publishers tried to raise book prices which is ultimately bad for readers. The U.S. sued Apple and five of the biggest publishers in 2012 for colluding to raising book prices, which would force customers to pay more than the $9.99 they were accustomed to.

b) Amazon is a retailer.

At the end of the day Amazon is (mostly) a retailer that resells publishers’ books. I say “mostly” because Amazon does have its own imprints. They negotiate contracts that vary from publisher to publisher.

When I go to the suburbs to visit my parents I’ll usually stop at Walmart or Target to restock on essentials like baby and household items that are a pain to stock up in the city. If Target doesn’t have the particular baby cereal I’m looking for, I’ll just go to Walmart. Walmart doesn’t always stock the cereal I want, and sometimes I’ll have to go to a specialty store to get what I need.

What retailers and authors should be doing

If I were one of the other big-book retailers like Barnes & Noble, Kobo, or iBooks, I’d use the dispute to make sure readers and authors don’t become the victims in this. I’d leverage the dispute to make sure I’m actively promoting Hachette titles, or even discounting them to steal away the market share from Amazon while I could. Walmart is doing this and has seen a 70 percent increase in sales because they are selling J.K. Rowling’s new book. If you go to Walmart’s homepage the discounts are front and center.

If I were an author like Michael Sullivan, who is reportedly seeing a 40 percent drop in sales with Hachette’s dispute with Amazon, then I’d make sure I’d be up in Hachette’s business. I’d make sure they are promoting my print books on Barnes & Noble, iBooks, or Kobo so my readers don’t suffer. I’d write a blog post on my homepage and direct readers to other places where they could buy my books. I’d also use this opportunity to collect emails and gain a following so I don’t have to be dependent on a publisher.

But these are the battles of the giants, and giants only care about bringing down other giants. They ultimately don’t care about the readers or authors — otherwise they could be doing so much more to make sure the authors and readers don’t suffer.

It’s a great time to be a self-published author

It’s a great time to be an indie or self-published author because indie authors don’t have to deal with this nonsense. You can choose the retailers you sell through and also sell directly from your own website. If you have a problem with a particular retailer, you have options to go elsewhere.

As the battle continues, I find traditional publishers are more and more pressed to prove their value to authors. The advances are small and the marketing support is meager at best. They can’t even come up with ways to make sure their authors are taken care of while they are negotiating a contract dispute. You can already raise funds for your book through sites like Pubslush and Kickstarter and easily put together a publishing team. Today, I can finish my novel, hire and send it over to an editor, work with an expert designer to have a great cover and have it up online to sell in no time. If I were working with a traditional publisher it would take over a year.

Realistically, publishers aren’t going to be the ones to take on Amazon effectively because Amazon is so good at out-executing other retailers. What Amazon offers is too valuable right now to readers and independent authors. I myself am an Amazon Prime customer and love that I can order something today and it shows up at my doorstep within a couple of days.

Also, like David Gaughran points out, self-publishing is huge in the U.S. market. It’s estimated to be anywhere from 25 percent to 30 percent of the e-book market on Amazon and Barnes & Noble. These numbers are sizable, and self-publishers are really valuable to Amazon right now too.

Digital has changed the publishing industry and publishers don’t like that, so they’re trying to hold onto whatever control they historically had. Soon, they’ll realize that if you want to be a player, you need to step up the game.