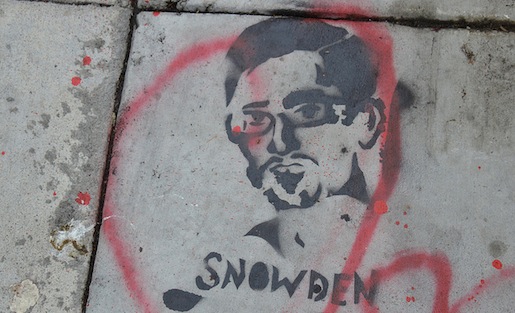 Edward Snowden was the keynote speaker at this year's PDF conference. Photo by Steve Rhodes on Flickr and used here with Creative Commons license.

Just as the Personal Democracy Forum (PDF) was commencing last year, news broke that a young ex-CIA analyst working under contract for the National Security Agency in Hawaii disclosed reams of classified documents to the media. The leak was blasted by the Obama administration as a massive detriment to America’s national security and applauded by civil libertarians as a whistle blown on a secret, statist, and suspicion-less surveillance program.

For PDF, one of the country’s top pow wows of digital media evangelists, the news of a tech-savvy idealist’s deployment of digital tools to surveil the surveillers (usurp the usurpers?), reinvigorated the conference, then in its 10th year. It’s no surprise, then, that when the Personal Democracy Forum reconvened late last week, Edward Snowden was the keynote speaker. The Snowden revelations are catnip for this front-line battalion of digital media revolutionaries, given the interwoven themes of government overreach, corporate complicity and individual empowerment.

"Might corporate surveillance (i.e., data collection) be in the crosshairs as tech companies begin to outgrow, play an outsized role within, or develop different priorities than, advocacy communities like PDF?"

The PDF conference just wrapped up in New York City.

In the foreword to his newest book, PDF co-founder Micah Sifry warns that the Internet “is in danger of being destroyed by a combination of greed (on the part of big tech companies who are walling it off), laziness (on the part of users who are choosing free and convenient services over a more decentralized and personally secure architecture), and nationalism (on the part of some countries that fear the freedom that the Internet makes possible…).” It was this last piece of the trifecta that received the most scorn at this year’s conference.

In the lead-up to Snowden’s presentation, security technologist and Berkman Center fellow Bruce Schneier informed us that “fear and convenience” have propelled the proliferation of state surveillance. Holmes Wilson and Tiffiny Cheng, the duo responsible for the SOPA blackout, insisted that, while the NSA are “masterminds” at targeted surveillance, when it comes to the trolling tactics of suspicion-less surveillance, they’re “scavengers” — like “raccoons going through the trash.” Without the widespread adoption of encryption technologies, they added, “we as a community left the lid of the trash can and the garage door wide open.” They also shared the news that Google will begin offering end-to-end encryption services for Gmail (!).

Up next, the Electronic Frontier Foundation’s Jillian York proclaimed that “encryption is for everyone.” Acknowledging that encryption is “not 100 percent safe,” York suggested the encryption movement take up the spirit of the safe sex movement, in which the goal is “harm reduction” rather than the complete elimination of risk.

Might the call for a more widespread use of encryption technology be a harbinger of a sort of technological arms race between large tech companies that try to encrypt their users’ data and intelligence agencies that seek more sophisticated surveillance technologies to crack these encryption? The conference was sponsored by tech companies like Google, Microsoft and Facebook and, as mentioned, was primarily critical of government surveillance. Might corporate surveillance (i.e., data collection) be in the crosshairs as tech companies begin to outgrow, play an outsized role within, or develop different priorities than, advocacy communities like PDF?

Snowden, piped in from Russia via Google Hangout, was quick to nod to the national security imperatives that he’s been accused of transgressing. Distinguishing between the need to protect “the nation” and to protect “the state,” he insisted that, while government surveillance might accomplish the latter, his actions unquestionably help us do the former. In explaining why keeping metadata private is a top priority, Snowden quoted former NSA and CIA director Michael Hayden who’s reportedly said, “we kill people based on metadata.” Indeed, if the nation-state maintains a monopoly on the legitimate use of violence, as Max Weber once pointed out, state surveillance programs have graver consequences than those of the private sector.

Edward Snowden was the keynote speaker at this year’s PDF conference.

If the fight against suspicion-less surveillance is being waged against entities that are national in scope, one takeaway from the conference was that many of the openings for meaningful online activism are local. Jerry Paffendorf left behind a career in Silicon Valley to help fight blight in Detroit. Using digital tools and large datasets to survey rather than surveil, Paffendorf created online maps to visualize and track overgrown and dilapidated properties, and launched a “blight removal task force,” which can be seen at MotorCityMapping.org.

As the conference came to a close, I exchanged some observations with a producer for Brian Lehrer, the NYC public radio host. We reflected upon the dramatic ways in which digital media had transformed in the 11 years that the forum had been active and, yet, how unchanging the manifestos and mantras of the participants remain. Has this message consistency been a strength or a shortcoming of a revolution whose clarion calls have fluctuated between transparency and privacy, global connection and local engagement?

If Micah Sifry is correct and nationalism is responsible for the policies that curtail Internet freedom, then nationalism accordingly becomes one of the revolution’s adversaries. But these terms are fluid and contestable. As Benedict Anderson, the author of the “Imagined Communities: Reflections on the Origin and Spread of Nationalism, Revised Edition”, wrote, the “twin conceptions” of revolution and nationalism are “inventions on which patents are impossible to preserve.” Herein lies both the principal challenge and an opportunity for our digital media revolution.

Correction: This story has been altered to correct that Wilson and Cheng, not York shared the news that Google will begin offering end-to-end encryption services for Gmail.

Mark Hannah is a doctoral student at the University of Southern California’s Annenberg School for Communication. Mark’s political career began on the Kerry-Edwards presidential campaign, where he worked as a member of the national advance staff. He’s more recently done advance work for the Obama-Biden campaign, the Presidential Inaugural Committee and the White House. In the “off-season” (i.e., in between campaigns) he worked in the PR agency world and conducted sensitive public affairs campaigns for well-known multinational corporations, major industry organizations and influential non-profits. He serves on the board of directors of the National Association for Media Literacy Education, is a member of the Public Relations Society of America and was a research fellow at the Society for New Communications Research. He is a graduate of the University of Pennsylvania and received a master’s degree from Columbia University. His personal website is www.mark-hannah.com, and he can be reached at markphannah[at]gmail.com. Follow Mark on Twitter: @ProfessorHannah.

One response to “At Personal Democracy Forum, Snowden & Co. Turn Focus To Encryption”