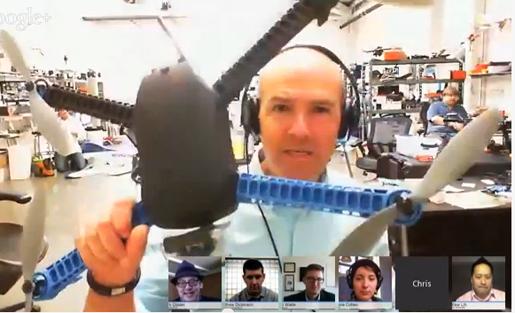 3D Robotics CEO (and former Wired editor) Chris Anderson was a guest on this week's podcast, and showed off one of the drones his company makes

Recently drones have become ubiquitous in the media, and not just for executing civilians abroad. Newsrooms are using drones to go places their reporters can’t reach, and drone-deploying filmmakers are capturing what was once cost-prohibitive aerial footage.  And soon, an unmanned aerial vehicle might become your mailman when Amazon launches their drone delivery service. In Silicon Valley, Facebook and Google are getting into the drone game as a means to deliver internet to the unconnected, particularly in the developing world. This week, Google bought Titan Aerospace, a start-up that makes solar-powered high-altitude drones. And not to be outdone, Facebook purchased rival dronesmith Ascenta, with plans to create a blanket Wi-Fi network to connect the world via their social network. On this week’s show, we’ll be joined by special guests Chris Anderson, former editor at Wired and CEO and founder of DIY Drones, and Matt Waite, founder of the Drone Journalism Lab at Nebraska University. We’ll also be joined by regular Andrew Lih from American University and host Mark Glaser from PBS MediaShift.

Chris Anderson is the CEO of 3D Robotics and founder of DIY Drones. From 2001 through 2012 heI was the Editor in Chief of Wired Magazine. Before Wired he was with The Economist for seven years in London, Hong Kong and New York. He’s the author of theNew York Times bestselling books The Long Tail and Free as well as the new Makers: The New Industrial Revolution. He also founded GeekDad, BookTour and a few other companies now lost in the mists of time. His background is in science, starting with studying physics and doing research at Los Alamos and culminating in six years at the two leading scientific journals, Nature andScience. He liive in Berkeley, California with his wife and five children.

Matt Waite is a professor of practice at the College of Journalism and Mass Communications at the University of Nebraska-Lincoln, where he founded the Drone Journalism Lab. Prior to joining the faculty, he was the senior news technologist for the St. Petersburg Times of Florida and the principal developer of the Pulitzer Prize-winning PolitiFact. In 2007, he began working as a hybrid journalist/programmer, combining reporting experience and Web development to create new platforms for journalism. The first platform he developed was PolitiFact, a website that fact checks what politicians say. The site became the first website awarded the Pulitzer Prize in 2009.

Matthew Dickinson is a System Administrator and Instructor for the Information Technology Program and Computer Science department. In addition to co-founding the Missouri Drone Journalism project, Dickinson currently runs the IT Program Drone Lab and investigates various drone technologies. Dickinson works on technical aspects of Unmanned Aerial Systems and leads projects and student research into these.

Similar to possible efforts by Facebook and Google, the Pentagon and DARPA announced their plans to recycle old drones into Wi-Fi hotspots so that troops abroad can have the same high-capacity connectivity as the 4G cell networks they use at home. Despite the creative and commercial fervor to deploy drones, the FAA is scrambling to regulate the influx of unmanned aerial systems, attempting to enforce their ban on domestic drones. Until recently, drones were classified as “model aircraft,” which allowed hobbyists and pros alike to fly freely, without regulation. But now, as drones have grown beyond a niche interest, the FAA is on track to implement sweeping drone regulations by 2015, which anyone—Mark Zuckerberg or otherwise—will have to navigate. Some say the current FAA definition of a UAS is too broad, allowing arbitrary enforcement of devices that are essentially children’s toys. And some say the sweeping regulation infringes on constitutional liberties.  For instance, the FAA threatened legal action against the Dayton Business Journal if they posted footage of a burning building that was captured by a hobbyist drone and donated to their site.