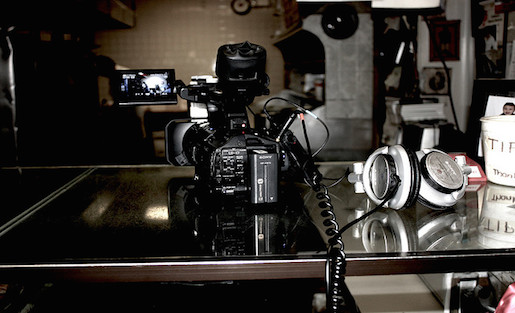 Photo by Ben Churchill on Flickr and used here with Creative Commons license.

Is diversity an afterthought in film fest programming, or is the production pipeline just really skewed toward the same race and class segregation as the rest of society? And is there anything to do about it? The SXSW lineup is only the latest to provoke that thought for me, and it’s AJ Schnack’s gutsy call to harder-edged, more thoughtful discussion in docs that triggers the thought to raise it in public, even though festivals are typically a moment to celebrate achievement.

SXSW is an important festival for documentarians; it attracts major business attention for its premieres. There is an unofficial mini-market going on during the fest itself, and an SXSW imprimatur means a lot in later dealmaking.

"I don’t think film festivals showcasing documentaries generally are featuring work by or about people of color, the working poor or working issues generally."

SXSW programmers are aware of their power, too, and are thoughtful about trying to provide opportunities. And yet, it’s really hard to find docs that creatively leap over the de-facto segregation of class and race in American culture.

Consider the SXSW lineup, and let’s look for working class and African-American characters as our markers. Let’s not include international characters for a diversity count when we’re talking about diversity within the U.S. Let’s look in three SXSW Film festival categories — Competition, Spotlight (non-competition premieres) and Visions.

Among the eight competition documentaries shown at SXSW, only “The Great Invisible” had an African-American character in it.

Among the eight competition documentaries, only one that I could find had an African-American character in it: “The Great Invisible,” which also featured poor, completely disenfranchised white people as well as people in the working middle class, wealthy executives, engineers and other professionals. One other film, “Mateo,” had plenty of Afro-Cubans in the background, and a wealth of Mexicans as well, but they were the color in a fish-out-of-water story of a white, American mariachi singer who can barely speak Spanish.

How about Spotlight, the non-competition lineup? It had some great films in it, including a favorite of mine, “Seeds of Time.” That one featured some Bolivian farmers. “Manny” was about a Filipino boxer. “Legend of Shorty” featured plenty of Mexicans, some professionals, in a story about the elusive drug cartel lord. But in 12 films, there wasn’t one I could find that dealt with working class characters and issues, or featured African-American characters.

Well, let’s check out Visions, then. Visions is the SXSW section for the quirky, offbeat, fresh and different. There were six docs in that category. If we take out the international — and include in that category the winsome “Song of the Forest,” about a white American’s passion for the music of the Bayaka people (sometimes called Pygmy) and culture and his visit to America with his Bayaka son — then there are two films of the eight that deal with working class and/or African-American culture, life or characters.

Both films are NYU student thesis films, helped along the way by Spike Lee, who teaches there. “Evolution of a Criminal” by Darius Monroe accomplishes a lot for a first foray that’s really not quite finished yet. He explores why he committed a bank robbery at 16, and a naïve, protected 16 at that. In the process, he describes social, cultural and economic pressures on a struggling family that open windows into others’ experiences. But it’s still very much a student project.

“Surviving Cliffside” also emerged from NYU, and also tells a personal story in a way that’s rough around the edges. Jon Matthews focuses on his cousin’s family in the Appalachian town in which he grew up. The family inhabits a world in which opioid addiction and shoplifting are seen as appropriate adaptations to the living conditions, jobs are hard to come by, and in which a family’s hopes are pinned on their 7-year-old leukemia survivor’s winning (yes) the Little Miss West Virginia beauty pageant. I’m not the only one who’s expressed concern about the wisdom of these subjects exposing their lives this much to uninformed viewer voyeurism. While I found much honesty and truth in this story of daily life in a region that has become a national sacrifice area, and am outraged at the way in which casual media stereotyping of the poor seems to justify continued neglect, I don’t know that this film will launch a useful conversation.

Does the subject matter matter?

So SXSW has, I think (and maybe I missed something), in those three categories of Competition, Spotlight and Visions, one film — and admittedly, this one was the grand jury prize winner — that takes up a situation in a cross-class, cross-race way within an American context. It has two films, in Visions, that take us fully into the daily lives of the working poor and beyond the white American experience.

Both of those films feature criminality and, to some, shocking behavior. They can’t help, for all their honesty and truthfulness, conforming to some stereotypes, given the lack of surrounding material that takes up other aspects of working class, labor, and ethnic cultures. The fact that, by and large, race and class are picked up in Visions but not in Competition or Spotlight means that somehow the programmers didn’t believe there was interesting, leading or competitive work coming from, or depicting, people of color or the working poor.

Film festival programmers at SXSW and beyond should make a commitment to feature more diverse work. Photo by Matthew C. Wright on Flickr and used here with Creative Commons license.

I’ve been blessedly relieved of the challenge of programming, with its many filters, so I don’t have to face these realities directly. But I don’t think film festivals showcasing documentaries generally are featuring work by or about people of color, the working poor or working issues generally, even though the fundamental inequalities of this society — which visit themselves on the unflavored most harshly but are shared one way or another by us all — make for gripping conflicts. And if the other filters you’re using — wildlife, human rights, artistic, quirky, personal, ready-for-TV, whatever it is —somehow manage to replicate the segregation of the rest of society, that may not be surprising, but it might be something to address.

I think the material and the makers can be found. As an ITVS board member, I see that at least one production entity in the U.S. can find dozens of filmmakers and projects featuring people of color and working people to fund and also showcase on the Independent Lens series on public TV. Of course, ITVS has diversity as a core mandate. But it’s not hurting the result, either. ITVS films —the grand jury prizewinner “The Great Invisible” was one — win awards, including both Emmys and Oscar noms. As a board member of Kartemquin films, I also watch both a company and individual filmmakers seek out opportunities to tell stories with and about people of color and working people, and to recruit new talent of color.

Where to go from here?

I haven’t had a discussion with any programmers about this, and I don’t even know that that’s where to start, because it’s easy to point fingers, and this is a systemic problem. It warrants a larger conversation. I hope we start having more conversations about the colors and cultures of documentaries, particularly at the point at which many start their lives. I hope that documentarians start one in D-word, because I love that platform. But I think we can all have that discussion where we work and live.

One response to “SXSW Docs Fall Short in Showcasing Diversity”