How Chalkbeat Is Studying and Building Its Audience 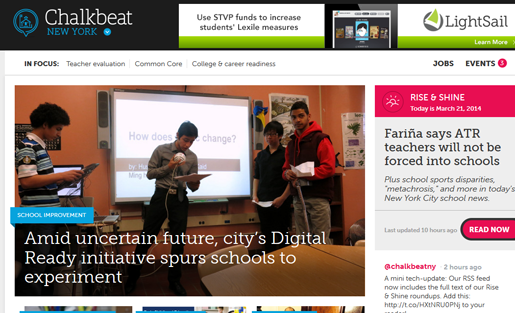 Chalkbeat uses its average number of unique visitors per month to understand how much of its total addressable market it's reaching.

Why study your audience? Simply put, without audiences there would be no media. In other words, a news outlet can’t exist without an audience.

A few weeks ago, I read a blog post written by Texas Tribune fellows Jake Batsell and Tim Griggs about how they’re studying the Tribune’s audience. In my still-evolving job description at Chalkbeat, a non-profit covering change in education, audience research is one of the main bullet points. But how exactly do you go about doing it? I thought Griggs described it well in the blog post:

"It’s all about going to where readers are -- not assuming that they will come to you."

“The four phases are: 1) Market sizing, to help the Tribune understand its total potential audience; 2) Qualitative research (focus groups) that help shed light on what attributes make moderate-to-heavy users different from non-users, 3) Quantitative research (surveys) that will help paint specific audience profiles of users and prospects, and 4) Creating a user insight panel to call upon for informal feedback and beta testing.”

I like it when people break down a process into steps that seem fairly manageable, so I wanted to learn more. Batsell and Griggs were gracious enough to immediately respond to my email and set up a time to talk about their process. By the end of the conversation, I realized that I (and other news orgs) could learn a lot from their work, which is very smart and thorough. But Chalkbeat doesn’t have the time, money or capacity to do the kind of in-depth audience research the Tribune did (yet!). So I gleaned the most important points we talked about and came up with a simplified, quicker “startup” version of audience research for Chalkbeat. I narrowed it down to three main steps. (I told you I really like steps.)

First, how do you define your audience? At Chalkbeat, this is how we break down our audience groups:

Now that we have an understanding of who we want to reach, step two is finding out the “addressable market.” Or in other words, what is our total number of potential readers? If I was going about this the way Batsell and Griggs are, I’d find out how many members the NYC teachers union has and I’d get an exact count of how many employees work at the city and state’s education departments. I hope to be able to do that down the road, but for now, I gotta ballpark the numbers.

*The total estimated reader base doesn’t include policymakers, influencers or voters. Students are used as a proxy for parents.

Now, ideally, we’d know exactly which group every single one of our readers falls into when he or she visits our site so that we know if we aren’t reaching enough parents or if most of our readers are only education professionals. But we don’t currently have a registration system for our readers to sign into and identify which group they fall into. So for now, we’re using our average number of unique visitors per month to understand how much of our total addressable market we’re reaching. This simple exercise (despite how rough my estimates are and how imperfect Google Analytics is) demonstrates that we’ve barely tapped our potential to reach our addressable market.

The last step is by far the most actionable, which I like, because sometimes doing too much of this theoretical study feels unproductive. We’ve defined our audience, figured out roughly how many of them we’re reaching and now, obviously, need to figure out how to reach more of them.

So I created a spreadsheet that details all the ways we can “distribute” and every single possible place we can distribute to. I created one of these for each of our bureau locations as well as nationwide (here’s a larger view).

I also didn’t want to limit our distribution to just media outlets, because it’s not the only place people get their information. If a teachers union links to our stories in an email newsletter, it’s just as valuable as that same story being republished in a popular city newspaper. It’s all about going to where readers are — not assuming that they will come to you.

One last, important note: Audience research shouldn’t be done on a one-time basis. It should be an ongoing process to assess changes in who our audience is, their interests and how they’re getting their information. And as our audience changes, our content and engagement efforts should change too.

Anika Anand is the director of engagement for Chalkbeat and was previously a reporter for GothamSchools. She has been published on California Watch, MSNBC.com, Salon, the New York Daily News and others. She graduated from the CUNY Graduate School of Journalism with a master’s degree in business and economics reporting and studied journalism at the University of North Carolina at Chapel Hill.

This story has been cross-posted at NewsBiz and Anika Anand’s personal blog.