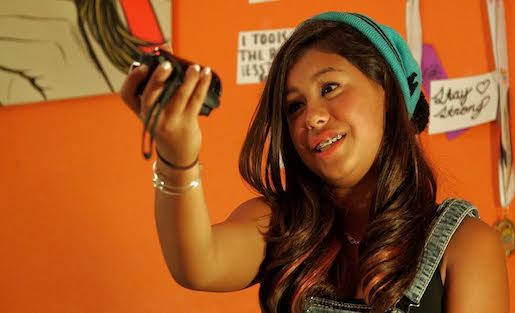 In a documentary that debuts on PBS Frontline this week, author Doug Rushkoff explores the relationship between big corporate brands and the young people who are so quick to promote what they “like” on social media.

“Generation Like” sheds light on the ever-changing advertising and marketing industry and the phenomenon of teens being relentlessly marketed to online — while also becoming the marketers.

"What’s designed to look like a grassroots wave of excitement [online] is actually a meticulously planned marketing strategy." -Douglas Rushkoff

Building on his 2001 documentary “Merchants of Cool,” in which Rushkoff underlined a similar “cat-and-mouse game” between MTV and teenagers, Rushkoff talked to teenagers across the country about how their desire to identify with what’s cool, by, say, “liking” the Twilight film series Facebook page or retweeting messages from Nabisco’s Oreo brand can turn into cash for those companies.

According to Rushkoff, impressionable teens who have replaced the habit of plastering their favorite band or film posters on their bedroom walls are now inhabiting the digital space in droves, and most of them have no idea just how much their Facebook shares and retweets are benefiting the trendiest brands out there.

Teens now have the option to engage directly with brands on social media and earn “digital currency.” Photo by Jason A. Howie on Flickr and used here with Creative Commons license.

“Generation Like” delves into the business of big brand social media marketing, specifically by talking to some of the young adults that have made careers from an abundance of “digital currency” — likes, shares, favorites, retweets and more.

Young people like Tyler Oakley, for example, who simply use social media as a way to connect and present their unique identity to the web community, somehow end up with nods, free stuff and additional opportunities to boast on a particular brand to the online following they’ve amassed.

It’s actually not a complicated concept: Companies are working toward a certain number of ad impressions, views and clicks in order to be profitable, so they often use teens, especially those who are particularly active on the web, to sell their products for them.

Each time young people are prompted to share about an upcoming blockbuster, or sing their favorite artists’ praises, or perhaps show their support for something as seemingly innocuous as a cookie (everyone remember the gay pride Oreo controversy?), companies are collecting that social media data and forming demographic profiles of the users making their content go viral.

What comes next? Brands convert a high volume of “likes” and shares” into dollars and cents.

The result of this seemingly symbiotic relationship might suggest that campaigns like the Oreo one, for instance, received exclusively organic traffic. But what Rushkoff finds is that there is much more going on behind the scenes. As he says in “Generation Like,” “what’s designed to look like a grassroots wave of excitement is actually a meticulously planned marketing strategy.”

While the readiness of young people to be willing participants in the new social media marketing game was Rushkoff’s most surprising discovery in his research, he told me was also shocked at what he learned about the marketers of all things “cool.”

“They’re transparent and open about it,” he said. “I thought marketers would hide their strategy.”

So, what do we make of this blossoming form of social media marketing? Is it fair to label it exploitation of the teenagers who, having grown up in “generation like,” know no other way of life?

“Exploitation is a strong word,” Rushkoff said. But, the playing field is unequal, and when push comes to shove, someone will have to win. In the end, “It’s the company’s value system that will win out.”

It’s clear that marketers are following the research out there on teens and their social media habits, like this November 2013 report from Pew Research Center. Not only have advertising pros learned exactly how young people share, but they’ve also learned just what drives them to share their content and promote their goods and services.

As social media stats keep demonstrating growth, and teens continue being active online, what is there to do about the blurry line between brands and their young consumers?

Rushkoff isn’t exactly sure, but he knows this: “The platforms on which teenagers are spending their time… are embedded with values that we may not be fully aware of.”

When will young people figure out that their every retweet, like and share for big brand products isn’t solely an expression of self, but part of a scrupulous plan by marketers to sell their Oreos, Sharpies and Taco Bell?

“These kinds of things ebb and flow,” Rushkoff said. “Over time, there will be a reaction against it,” he told me. “I’m kind of hopeful we’ll have another burst of awareness.”

PBS Frontline’s “Generation Like” debuted Tuesday, Feb. 18 and will re-air several times this week. Check for local listings here. A preview can be found below: