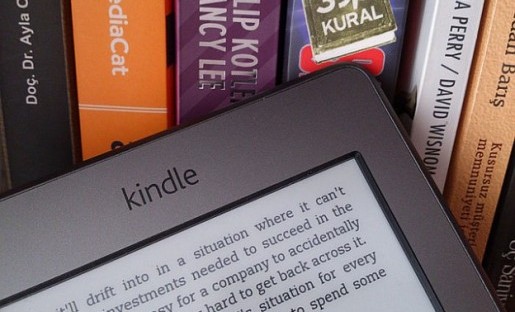 Photo by mobilyazilar on Flickr and used here with Creative Commons license.

In a big year for e-books, two behemoths went to court while new services and companies emerged. Apple faced allegations over e-book pricing, calling into question the prices of e-books in general. Amazon went to court over access to e-books but saw its case tossed. New services from Amazon and streaming e-book companies emerged in the market, while Nook still declines. The access of e-books in libraries increased while the Digital Millennium Copyright Act limited access for people with disabilities.

"75 percent of parents with children ages 2 to 13 are planning to buy e-books for their children this year."

Apple went to trial over civil allegations by the U.S. Department of Justice that it conspired with publishers to raise the price of e-books, according to Reuters. Five publishing companies that were also part of this conspiracy settled before trial, unlike Apple. A judge ruled in July that Apple did violate anti-trust laws, despite their insistent claims that they hadn’t. Publishers claimed that a motion limiting Apple from discounting books would hurt them rather than punish Apple.

In August a judge required an external monitor to ensure Apple doesn’t fix e-book prices again, according to Reuters. The monitor was named in October, but in late November Apple filed court papers attacking the selection. These papers called into question meetings held between the monitor and the judge who ruled on the case.

Earlier in 2013, three brick-and-mortar stores sued Amazon and other big publishers for forcing small bookstores out of the e-book market, according to The New York Times. The stores claimed that publishers signed contracts with Amazon allowing their e-books to be read only on Kindle devices or apps. A judge threw out this case, citing a lack of evidence of a conspiracy.

Buzz continued to brew this year about the real cost of an e-book. For most of the year, the average cost of an e-book was between $7 and $8. However, this average can go up or down based on the number of big sellers released in any given week, according to Digital Book World. But with Apple’s breaking of anti-trust laws and conspiring to raise e-book prices, we’ve seen Amazon’s $9.99 books compared with Apple’s proposed $12.99 and $14.99. Compared to last year’s $13 dollar average per book, this year’s $7 doesn’t look too bad.

Amazon released two key e-book services in 2013. The first is Kindle Matchbook, a service from Amazon that allows users who have purchased print books to purchase digital copies of those books for a discounted price. Kindle Matchbook will go through a user’s purchases and offer a list of available digital copies. The second is Matchmaker, giving Kindle users the ability to upgrade their Kindle e-book to one with the ability to switch between text and audio versions of the book. Some of these upgrades are free, and others cost a couple of dollars.

Kids on the iPad by Flickr user Thijs Knaap.

Startup Oyster has brought the world of paid subscription to e-books. Users can pay a subscription rate and have unlimited access to the 100,000-title library. Recently a new app, iStoryTime, has been introduced as the children’s version of what Oyster has done. It licenses works from major studios to include, among others, Sony, PBS and Jim Henson, according to Sarah Perez at TechCrunch. However, these “Netflix-for-e-books” companies may have a difficult time competing with Amazon and local libraries, TechCrunch’s Perez reports.

With new services like iStoryTime and Bookboard, another streaming e-book app for kids, people are wondering if e-books are better or worse than print books for children. The Joan Ganz Cooney Center at Sesame Workshop published “QuickReport: Print Books vs. E-books,” finding few differences between e-books and print books for co-reading between parents and children. The authors encouraged e-book producers to think carefully about advanced design, as some formats can distract — good news considering 75% of parents with children ages 2 to 13 are planning to buy e-books for their kids this year.

Many authors constantly debate whether to publish using traditional methods or go the self-publishing route. While columnist Amy Chavez expressed her woes with going the traditional route and swears to self-publish in the future, author Ted Heller goes on at length about self-publishing not replicating his success when publishing with traditional methods. However, there is another path authors can choose: a hybrid deal. This hybrid option gives authors easier access to getting their books in brick-and-mortar stores while retaining e-book rights, providing a happy medium between media.

In 2013 people grew unhappy with a section of the Digital Millennium Copyright Act forbidding breaking “digital locks.” This forces people who are blind to petition every three years to the Library of Congress to make sure they can legally access software that reads e-books to them, according to Ars Technica. Copyright law gives authors the exclusive rights to making adaptations, which includes translation to different languages, creating hassles and headaches for those who need to have e-books read aloud, according to Slate.

Several publishers have engaged with libraries this year. Earlier this year Hachette announced it would be making all of its titles available to libraries. The e-books would only be available to one patron at a time, but the library would only need to purchase the e-book once. Hachette also made a deal with Follett to sell Follett’s educational material to school libraries. Penguin has rejoined the market and resumed allowing libraries to lend out their titles in e-formats.

Lauren Simonis is a senior at the University of Wisconsin-Madison studying Journalism and English. She is an intern at PBS MediaShift.