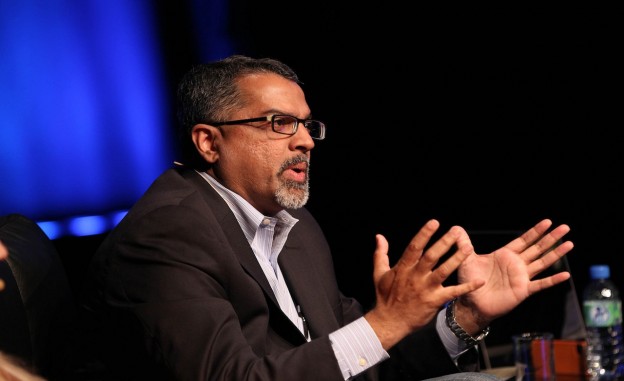 With more and more people consuming news digitally, the future of journalism has never been brighter.  But journalists of the future will face a number of challenges, according to Raju Narisetti, senior vice president and deputy head of strategy at the new News Corporation.

Narisetti recently shared his predictions about the future of media with students at the West Virginia University P.I. Reed School of Journalism, (where I am dean) as part of our Future of Media — Now series.

“When you go into newsrooms, you don’t have to code, but what you have to be able to do as a journalist is to speak the language of developers.” -Raju Narisetti

In a nod to the “listicle” format, popularized by BuzzFeed, Narisetti provided his top nine reasons why the road ahead for journalism will be tricky to navigate.

Despite downsizing and cutbacks at the nation’s top newspapers, print journalism continues to offers advertisers the most effective way to reach audiences in many markets.

For example, The Washington Post (where Narisetti served as a managing editor) still captures about 40 percent of the local market, providing a necessary revenue stream for the paper.

“If it’s 50, 60, 70 percent of our revenue and profit is coming from print, we will always have to have kind of large staffs focused on print,” Narisetti said.  Comparing print journalism to the declining auto industry, he said, “It’s like Detroit.  Fewer people will make it [journalism], but you will always need somebody making it.”

While more readers are moving to digital, the revenues from digital haven’t kept pace — because the audience has become increasingly fragmented, giving advertisers the upper hand.

“If you’re an advertiser, the choices you have where you can run your ads continue to explode,” Narisetti said. “And as a result you [news media] can make a fair amount of money on digital, but it’s nowhere close to what the revenue is for print.”

Narisetti says it’s essential that newsrooms build new revenue models into new digital products and applications. He described The New York Times’ Pulitzer Prize-winning Snowfall project as an “amazing” experience that fell short because it had no revenue model attached to it. “At the end of the day, the Snowfall page views are really empty calories because they really haven’t generated any incremental revenue.”

3. Paywalls are here to stay and struggle.

The number of newspapers with paywalls will continue to grow but with varying degree of success because it’s hard to attract digital subscribers willing to pay for content. Narisetti says that the most a news organization can expect to attract from either a paywall or a metered model is about 5 percent of its unique digital audience.

“If it’s seen as an extra source of revenue, I think it will succeed, but if paywalls are seen as solving the problem [of funding journalism], then most of them will fail,” said Narisetti.

4. News will have to go to readers; they don’t have to come to us.

With Facebook and other social media providing new pathways to journalism, the modern audience doesn’t expect to work hard to “find” the news. Today’s digital journalists must be able to write, report and market their stories. At the very minimum, reporters need to know how to use SEO to their advantage.

“In the print world, there is a position called circulation marketer, whose job is to figure out how to make money. That doesn’t exist in the digital world,” said Narisetti. “In 2013 the definition of a journalist must include ‘I will do everything I can to bring more people to my journalism.’”

Web video offers a significant monetization opportunity because (a) audiences want it and (b) the pre-roll advertising can be embedded into the content.

“Video is the first form of journalism where we have figured out that when somebody watches it – no matter where they watch it – the business model travels with it,” Narisetti said.

For that reason, The Wall Street Journal — a former print-only publication — is now producing about 1,600 videos or 120 hours of video a month, making it the largest producer of video in the world outside of a television newsroom.

6. Mobile might be a threat or opportunity, but it is a journalism reality.

With an increasing number of people accessing news through mobile devices, news organizations must adopt a “mobile-first” model — or risk becoming irrelevant.

This means packaging content in a way that is easy to digest on a small “window.”  For example, long narrative print leads could be replaced with shorter, snappier leads that can be read on the first screen.

It also means devoting significantly more resources to mobile, which is a long way in coming.  Narisetti says that even at The Wall Street Journal — which 36 percent of its audience reads only on mobile — just a handful of people serve on its mobile team.

Today’s news consumers are “promiscuous” — going from source to source and device to device, giving news organizations a limited amount of time to capture their attention.

“The advantage we had with great journalism or great storytelling exclusives used to be a day when we were primarily in the print world,” said Narisetti.  “It then shrunk to a few hours when the websites had to catch up.  If you’re lucky, now it has shrunk to two minutes.”

Narisetti says that “amazing” content is no longer enough.  The only way to catch and keep an audience is to create compelling experiences that keep them coming back, such as The Wall Street Journal’s graphic that tracked Mark Zuckerberg’s wealth in real-time when Facebook went public or The New York Times’ interactive Academy Awards ballot on Facebook.

8. Good and bad experiences all come at the same intersection: content and technology.

To produce impactful digital journalism, reporters, developers and designers all have to work together to create quality content that also will engage an audience.

But working as a team can be challenging for professionals who don’t always understand and appreciate what the “other” is doing.

“When you go into newsrooms, you don’t have to code, but what you have to be able to do as a journalist is to speak the language of developers,” said Narisetti. “If you make the conversation about what is the experience we’re trying to give to our audience, the developers get it and understand what you’re trying to do.”

Many companies that advertised in traditional media are now going directly to their consumers to promote their brands. The rise of “sponsored content” and “native advertising” has created a major threat to newsrooms.

Companies have also become skilled content producers, vying for “the single non-renewable resource my readers have, which is their time,” said Narisetti. For example, General Electric is trying to position itself as a leader in innovation through videos and social media campaigns such as #6secondsciencefair.

“We have to start thinking, how do we engage with these brands, how do we help them do this,” he said.  If news organizations don’t play in that space, they “are not going to have the opportunity to make any significant revenue in digital.”

Ultimately, the key to thriving and not just surviving in the ever-evolving digital environment is to continue to adapt, experiment and anticipate what’s coming next.

“The good thing about talking about the future is that it’s in the future,” he said. “But the bad thing is, it doesn’t have a sign post saying it’s coming. You just wake up one day and realize it kind of hit you, and if you’re not prepared, you’re left behind.”