Mediatwits #100: Data Visualizations at LA Times; Defining a Journalist or Acts of Journalism? 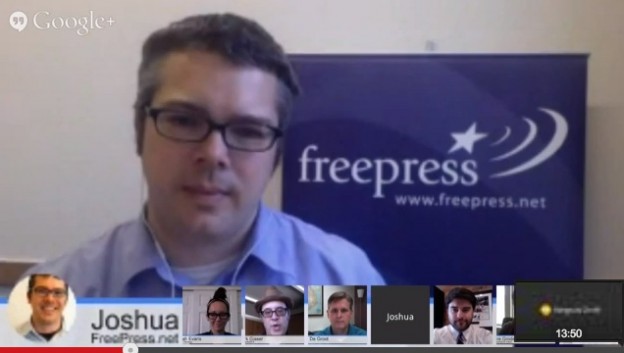 Josh Stearns from Free Press discussed the nature of defining a journalist on our latest podcast.

As digital platforms become more complex, journalists no longer simply ask themselves how best to portray a story with words and pictures. The digital medium provides unique and dynamic opportunities for stories and data to come to life. Data visualization — graphs, animations, interactives, and more — is increasingly becoming one more tool in a journalist’s storytelling kit. This week, we’ll be joined by Len de Groot, the new director of data visualization at the Los Angeles Times, to discuss how media outlets are pushing the limits of visual storytelling. We’ll also take a more philosophical turn on this episode and discuss the tricky issue of defining a journalist, especially in the context of penning shield laws that protect journalists from identifying their sources. To make sense of that debate, we’ll be joined by MediaShift contributors Jonathan Peters and Josh Stearns. We’ll also be joined by our regular panelist Andrew Lih of American University, new media consultant Sarah Evans, and our host Mark Glaser of MediaShift.

Josh Stearns is Journalism and Public Media Campaign Director at Free Press. Working with Free Press’s more than 650,000 members Stearns helps amplify the voice of local people in the policy debates that shape our media. Since 2011 he has been tracking journalist arrests and press suppression across the US, an effort the earned him “Storify of the Year” and the Lew Hill Media Ally Award for his use of cutting-edge technology and First Amendment advocacy. He has written numerous reports on journalism, media consolidation and public media, and speaks regularly about community engagement, activism and the future of news. His articles have appeared online at Mother Jones, Orion Magazine, BoingBoing and the Columbia Journalism Review. Stearns is a founding board member of the Freedom of the Press Foundation.

Len De Groot is the Director of Data Visualization for the Los Angeles Times, overseeing the development of graphics and data presentations for digital platforms and in print. A California native, he joined The Times after teaching at UC Berkeley’s Graduate School of Journalism and nearly 20 years of producing and directing graphics for digital, television and print products.

Jonathan Peters is an assistant professor at the University of Dayton, where he teaches journalism and law. He blogs about free speech for the Harvard Law & Policy Review, and he has written on legal issues for The Atlantic, Slate, The Nation, Wired, PBS, and the Columbia Journalism Review. Peters practices law in his time off campus, and he is the First Amendment Chair of the Civil Rights Litigation Committee of the American Bar Association.

Ever since the New York Times’ John Branch won a Pulitzer Prize for his epic multimedia “Snow Fall” narrative, more media outlets have been jumping on the rich visualization bandwagon. It’s not just a matter of making narratives pop with video and multimedia elements; stories are also being told with dynamic graphs and other infographics that make information accessible. Recent examples have included the LA Times’ graphic display of earthquake-prone buildings, the Washington Post’s interactive breakdown of the government’s “black budget” and NPR’s “Unfit to Work piece jam packed with graphs. How is the boom in data visualization changing the way journalists tell stories? Are the days of exclusively narrative journalism numbered?

2. What is a journalist, anyway?

For many, the word “journalist” might conjure up an image of a shoe-leather reporter with notebook and recorder in hand, employed by a mainstream news outlet to chase after politicians daily. But what about someone at the scene of a crisis live-tweeting information — is she a journalist? Or a college student who writes a political blog? Is Wikileaks a journalistic organization for disseminating information? Defining who gets to call themselves a journalist isn’t just semantics: Journalists are protected by some shield laws that exempt them from having to testify against their sources in court. In a recent study, Jon Peters found that journalists are commonly described as “someone employed to regularly engage in gathering, processing, and disseminating (activities) news and information (output) to serve the public interest (social role).” He argues in a recent article that this widely-accepted definition is dangerous for excluding so many other actors in the media ecosystem, such as bloggers and citizen journalists. Meanwhile, in a response article, Josh Stearns argued that we shouldn’t bother trying to define and protect journalists, but acts of journalism. These acts might be defined along ethical, behavioral or service-providing behaviors, Stearns writes.

2 responses to “Mediatwits #100: Data Visualizations at LA Times; Defining a Journalist or Acts of Journalism?”