Let’s Stop Defining Who Is a Journalist, and Protect All Acts of Journalism 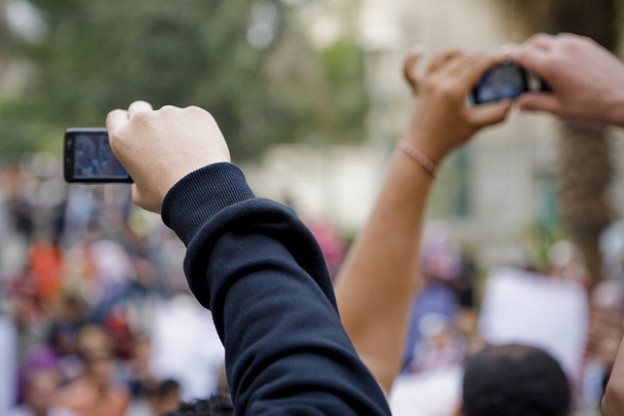 The following is an opinion piece from correspondent Josh Stearns, and portions were adapted from Stearns’ report, “Acts of Journalism: Defining Press Freedom in the Digital Age.”

"The accumulated knowledge of the past is not sufficient to create a definition of journalism that suits the future."

The resolution didn’t pass, but the 100-year-old organization did vote to support a separate resolution that “rejects any attempts to define a journalist in any way other than someone who commits acts of journalism.” SPJ’s move is part of a growing consensus that argues we need to move beyond trying to define who is a journalist and instead ensure that we protect all acts of journalism.

Two reports released last week tackle this question from very different perspectives. Jonathan Peters and Edson Tandoc wrote a post on PBS MediaShift headlined “Defining a Journalist Is Messy, But Crucial.” Their research focused on using “scholarly, legal, and industry” texts to determine common elements of how a journalist is generally defined.

What emerged is a definition that even the authors themselves won’t stand behind, calling it a “fatal blow to new forms of journalism.”

Don’t Look to the Past for Journalism’s Future

Photo by niclas and used here with Creative Commons license.

Their work is important because it highlights the danger of relying on conventional wisdom at a moment of such profound change. The accumulated knowledge of the past is not sufficient to create a definition of journalism that suits the future.

At the same time that Peters and Tandoc were compiling their research, I was at work on a complementary project with a different emphasis. At the core of my research was the idea that everyday Americans are central to the future of journalism as news consumers, distributors and increasingly as creators. As such, we need a framework for press freedom that protects longstanding journalism institutions alongside these new participants.

So rather than trying to define who is a journalist, I focused on trying to define an act of journalism. “If the ultimate idea is to protect newsgathering activities,” journalist Marcy Wheeler wrote earlier this year, “then why not establish what those activities are and then actually protect them, regardless of whether they are tied to a certain kind of institution?”

In my report, Acts of Journalism: Defining Press Freedom in the Digital Age, I reviewed case law and statements from leading journalism associations, bloggers and journalists advocating for an acts-of-journalism framework. While there is an emerging consensus on protecting acts of journalism, how we define those acts is contested terrain. Below is a summary of the debate, which focuses on three ways to define actions of journalism: ethics, behavior or service.

Journalism Is Rooted in Ethics

Journalism organizations and newsrooms have long promoted ethical codes with a similar set of standards. Journalists’ adherence to these codes has often been held up as a sign of their legitimacy. However, Ellyn Angelotti of the Poynter Institute has argued that in a shifting media landscape those who seek press freedom protections should be “judged according to an evolving set of standards and practices.”

The Poynter Institute’s new ethics guidebook accounts for new acts and actors who are part of the journalism landscape. “Technology has so drastically altered how news is gathered, processed and understood,” Tom Rosenstiel said in announcing the book, “so it’s critical the formal ethics of journalism accommodate those changes. News always belonged to the public. Now the ethics of journalism must consider the role of the audience, and the impact of community and the potential of technology more fully.”

Journalism Is How We Behave

However, our ethics tend to be measured through the yardstick of our actions, and thus, others have made the case that journalism is a function of our behavior more than our beliefs. Making the case that the Pakistani man who live-tweeted the raid that killed Osama Bin-Laden is a citizen journalist, Steve Myers, writing in Poynter, outlines five behaviors he sees as central to an act of journalism: The man answered questions, acted as a conduit for information, sought and shared reports from news sources, traded what he had heard with others and analyzed what was happening.

In his book Mediactive, Dan Gillmor outlines five different principles for trustworthy media creation: thoroughness, accuracy, fairness, independence and transparency. “These are universal principles,” he writes, “not just for people who call themselves journalists but for anyone who wants to be trusted for what they say or write.” He views these virtues as guidelines to acting honorably in the marketplace of ideas.

Mathew Ingram, who has tirelessly documented the debate over defining who is a journalist, argues that journalism is a process. “Learning how to work within that process,” Ingram writes, “to add journalistic skills (however we define them) to the streams of information that are flowing over us, is more crucial than ever, regardless of what we call the people who do that.”

Journalism Is a Service

Taking this idea one step further, longtime editor Melanie Sill argues that journalism is not just a process but a service. She writes, “we must reorder the fundamental processes of journalism toward the goal of serving communities [and] making quality journalism a collective endeavor.” Sill also highlights the need to transform journalism “from a product driven by factory processes to a service driven by audience needs.”

Jeff Jarvis echoes Sill, arguing that we should define journalism in terms of the service it provides. “Journalism helps communities organize their knowledge so they can better organize themselves,” he wrote recently in the Guardian. “So anything that reliably serves the end of an informed community is journalism.”

The truth is that acts of journalism embody elements of each of these definitions in complex and inconsistent ways. In the report, I offer one possible way to weave these various definitions together. But my biggest takeaway from this research is that these debates are symptoms of real fundamental questions about press freedom in American at a time when the press is changing all around us. These issues are bound up in questions of trust and accountability in journalism and in government.

So far, the debate over who qualifies as a journalist has taken place primarily among journalists and policymakers, with little or no community involvement. People everywhere have a stake in this debate, both as media makers and as news consumers, and we should engage them in these conversations more deeply. They are not just our audience, but also our allies in the fight ahead.

9 responses to “Let’s Stop Defining Who Is a Journalist, and Protect All Acts of Journalism”