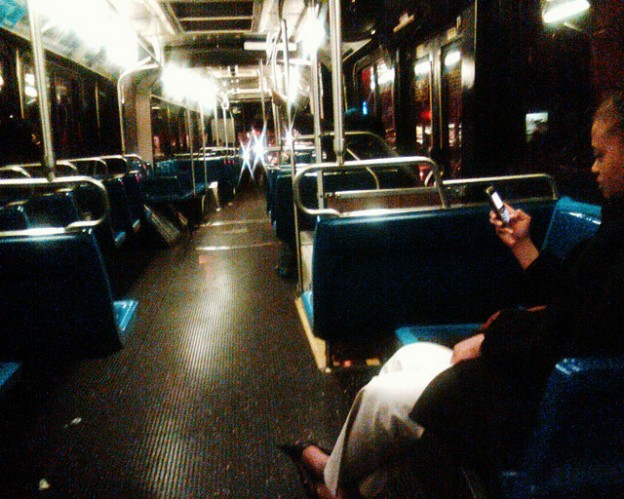 Photo by Eden, Janine and Jim on Flickr and used here with Creative Commons license.

Smaller screen, that is.

"if folks can’t use your stuff because they’re on the bus, you’re doing it wrong.” - Brian Boyer

Boyer, the news apps editor at National Public Radio (NPR) in Washington, D.C., knows more consumers are accessing news on their mobile devices than ever, and that news organizations are seeing traffic to their websites from desktop computers flatten.

“Designers say they can’t make their graphics, charts and graphs work on a small screen,” Boyer said during the recent Hacks/Hackers Buenos Aires Media Party, but “I tell them if it doesn’t work on mobile, it doesn’t work.”

This approach, known in news publishing as “mobile first,” reflects the reality of robust stats for mobile use. According to a number of reports, the average U.S. and U.K. consumer spends almost two hours per day on mobile. In some regions, such as many parts of Africa, users are leapfrogging computers altogether and going straight to mobile. NPR’s mobile/desktop split is nearly 50/50.

Although mobile devices in the U.S. were for a long time linked to walking down the street or driving in your car, “mobile no longer equals movement,” Boyer says.

According to Business Insider, 77 percent of people in the U.S. use mobile phones while lying in bed, 70 percent while watching TV, 65 percent while waiting and 41 percent in the bathroom.

With that in mind, Boyer and his team — two software developers, three designers, a reporter and an intern — have built apps to be “more than just something that fit size-wise on a phone.”

“Mobile isn’t about a smaller experience,” Boyer says. Mobile users “expect the whole Internet to work correctly. Our job is to make it work for them.”

Mobile news should be geared toward what Boyer calls the “cracks in the day” — people’s “in-between moments,” he says, “like before they go to work, while they are commuting, in bed after children are asleep.”

NPR’s new mobile site, launched in May, responds to the mainstreaming of mobile devices as a way of getting news. Although the screen is smaller, the experience is not. The mobile site features components like infinite scroll, access to story comments, advanced searching and extended NPR listening opportunities.

The apps team uses data to build features like crowd-sourced databases, maps, charts, video and photo into NPR’s coverage. It is designed to work for all devices — including mobile.

The recently launched NPR Playgrounds Project is a crowd-sourced interactive database of accessible playgrounds built to be mobile-friendly.

The team has seen the number of users accessing web features via mobile grow. Until late last year, most of the apps averaged 10 to 20 percent mobile traffic. But the 2012 elections app was accessed by 50 percent of users on mobile.

The NPR Fire Forecast app launched in March. The app, which shows large wildfires and forecasts burning conditions, was accessed by 25 percent of users via mobile. Shortly thereafter, Buried in Grain was 31 percent mobile-accessed.

The key to mobile first, Boyer says, is thinking: “Who are your users and what are their needs?”

“We don’t do journalism for our own satisfaction,” Boyer said, “so if folks can’t use your stuff because they’re on the bus, you’re doing it wrong.”

This post originally appeared on the the International Journalists’ Network’s site, IJNet.org. IJNet helps professional, citizen and aspiring journalists find training, improve their skills and make connections. IJNet is produced by the International Center for Journalists in seven languages—Arabic, Chinese, English, Persian, Portuguese, Russian and Spanish—with a global team of professional editors. Subscribe to IJNet’s free, weekly newsletter. You can also follow IJNet on Twitter or like IJNet on Facebook.

One response to “Inside NPR’s ‘Mobile-First’ Strategy”