Bringing Videogames to Film Festivals, and Rich Storytelling to Games 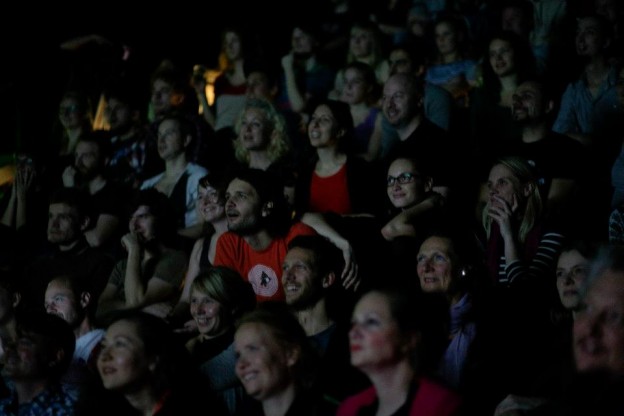 It might have given the average film festival attendee pause when they read the program for the New York Film Festival’s 2013 Convergence Program late last month and saw a panel titled, “Visit Los Santos and Blaine County: The World of Grand Theft Auto V.”

But descriptive movie terms like “character” and “sequel” aren’t out of place at all when talking about videogames anymore. Parallels of the gaming industry and the film industry are commonplace. As Erik Kain reported for Forbes in September, “Grand Theft Auto V not only hit $1 billion in sales faster than the fastest-grossing videogame, it beat the three biggest film launches of all time by 16 days.”

"The ability to seamlessly switch between main characters' points of view and drive a story forward is the future of interactive storytelling."

Is Gamification a Dirty Word?

The storytelling integrated into Grand Theft Auto V may come as a surprise to non-gamers, but those in the industry will tell you it has been heading in that direction as swiftly as the technology will allow. Players can watch television right along with the Grand Theft Auto V characters, and the shows they choose can say a lot about a character. Players can immerse themselves in the characters’ personal life, backstory included, as never before. But in the end, Grand Theft Auto V was created to be a game and while immersive storytelling enriches the experience, it is considered icing on the cake as long as it doesn’t interfere with the actual game-playing experience.

But, the inverse is true when creators gamify storytelling.

“Gamification” is a term that has gained popularity in recent years. It refers to the introduction of game mechanics to engage users in non-game mediums — the most common elements being to ask users to solve problems and/or to incorporate the social/reward aspects of games. This is currently being utilized in everything from software to storytelling.

Suvi Andrea Helminen hates the word “gamification.”  Currently an Artist in Residence at MIT’s Open Documentary Lab, her interactive documentary, “48 Hour Games” was presented at a panel at NYFF’s Convergence Program.  When she began shooting, Helminen says she didn’t know she was going to add game elements to her film. Helminen herself wasn’t even a “gamer” when she chose the topic of the Nordic Game Jam, a 48-hour long event where 300 game developers from all parts of Scandinavia meet up and compete to create the most innovative computer game.

As a child, Helminen loved “Choose Your Own Adventure” books, but it was her husband who actually recommended the Nordic Game Jam as a topic for a documentary. The filmmaking process began in the traditional way with casting a few key members of selected teams and then deploying five camera teams to follow the Nordic Game Jam participants as well as the installation of an un-manned “confession camera.”  It wasn’t until after Helminen completed shooting that the idea to add game elements to the film came to her.

“When I applied to film school in 1999, I wrote that I wanted to do a ‘Choose Your Own Adventure’ documentary. But that was before YouTube or anything, so the technology wasn’t there to do it. After I filmed ’48 Hour Games,’ I just woke up one morning and knew that was what I was going to do,”  Helminen said.

As for the “how” of the process, Helminen checked out other interactive documentaries already out there and tried to figure out what she could learn from them as well as see what she didn’t want to do. “48 Hour Games” launched online in December 2012 and generated a lot of attention at SXSW 2013 where it was presented to its first international audience. Just as Grand Theft Auto V is a game presented at a film festival, “48 Hour Games” is an interactive documentary that hasn’t been limited to screening at film festivals alone. Helminen has presented the project at music festivals and game conferences as well.

Making sure the game elements enhanced the project was a priority for Helminen. She tested earlier versions of the interactive documentary with audiences to make sure the game elements had function and didn’t become a gimmick that distracted from the experience. An important element to the experience for Helminen was the “consequences” of the participants’ choices. The documentary prompts participants during the viewing experience to make a choice between two options, usually to follow the next steps in the creative process of a team or watch a team member share a secret.

“These choices are not trivial,” Helminen said. Participants cannot “go back” or “do over” if they regret their decision. This ties directly into the “reward” system utilized by games; if participants follow, for example, the graphic artist’s storyline enough times, they will collect “paint brushes” that when accumulated unlock bonus footage. Unlike a traditional documentary, it is unlikely any two viewers or participants will have the exact same experience watching “48 Hour Games” because of the reward and consequence system integrated into the interactive experience.

Like Helminen, many filmmakers may find that adding game elements enhances the viewers’ experience or perhaps even solves problems uncovered in post-production, but just as many creators are producing projects where the storytelling and game elements are inseparable as they are conceived simultaneously from the onset of the project.  “Cloud Chamber Mystery” is such a project.

Recently launched in Denmark, its creator, transmedia director Christian Fonnesbech, had to oversee four different creative units to bring a project of this scale to fruition. That’s basically four times the work of creating a stand-alone film or game. “Cloud Chamber Mystery’s” production team included a film unit, a game unit, an Internet unit and a documentary unit.

Of course one of the greatest obstacles to creating a mixed-platform interactive project is explaining in its earliest inception “what the hell” the project actually is.

“I’ve been pitching this project 10 times a week for 13 years. Slowly you get better,” Fonnesbech said.

Even in film school, Fonnesbech was interested in how technology affected storytelling.

“Film is an industrial art form. It is electricity, chemistry and so forth. The new age is the Internet,” he said.

As early as 2001, Fonnesbech was creating stories online, but his experience didn’t make explaining his projects any easier.

“There was a constant conversation that happened, especially when it came to financing, regarding ‘what is a story on the Internet,’ to myself, to my users, to my financiers, to everybody,” Fonnesbech said. He added, “Along the way, the Internet changed as well. For the first mystery project in 2006, there wasn’t even Facebook. We evolve the form along with changes and search for the storytelling elements that allow an audience to engage emotionally.”

Fonnesbech jokes that despite his ability to better describe what exactly a transmedia project is these days his mother still doesn’t understand what he does.

Participants in “Cloud Chamber Mystery” watch film clips, unlock secret documents, and engage in an active social network while trying to solve the mystery. He cites “The Blair Witch Project” as being an influence in the early stages of development. He appreciated the way they posted the backstory online and allowed the audience to explore it on their own. He said, “Perhaps because discovering knowledge is a big part of the Internet, at least for me, something clicked. In a film, you’d have trouble putting real knowledge in there because it would destroy the dramaturgy and flow of the emotion, but since you’re the person choosing how to spend the time in our story, and we needed a very complicated backstory to create the illusion this is real, integrating documentary elements and science elements is not a problem.”

The game elements and reward structure in “Cloud Chamber Mystery” are something Fonnesbech felt could have as easily been toned down. He said it is all  “a matter of orchestration” and even if he had removed the point system, “Cloud Chamber Mystery” would still have game mechanics — they just wouldn’t be as noticeable. He said he chose to utilize a traditional reward system game element in the project because he thought it would help people engage in this new storytelling form. For example, a participant can say, “I’ve gotten points, I must be doing something right.”

“It was really a great process, very collaborative, that boiled down to making something unique that would explore this magnificent world they built from scratch. That was the driving force behind all our programs really, giving audiences new ways to explore immersive storytelling, to show as much as tell.”

The New York Film Festival isn’t the first film festival to foray into bringing “gaming” aboard as a form of “cinematic storytelling” and if there is any doubt as to the quality of the film elements of these projects, “Cloud Chamber Mystery,” for example, stars actors from the most recent Bond movie and “Game of Thrones.” We’ve probably already reached a “chicken or egg” point with game elements and storytelling — impossible to tell which hatched a given project first. While some audiences will always prefer to sit back with popcorn as the only thing in their hands, there is a certain appeal to choosing your own story, character path and ultimate destiny. If Grand Theft Auto V’s record-breaking sales are any indication, the ability to seamlessly switch between main characters’ points of view and drive a story forward is the future of interactive storytelling.

Amanda Lin Costa is a writer and producer in the film and television industry. She currently producing the documentary, “The Art of Memories” and a feature film on Annie Londonderry, the first woman to travel around world on a bicycle. You can follow her on Twitter at @TheLoneOlive or visit her at theloneolive.com.

One response to “Bringing Videogames to Film Festivals, and Rich Storytelling to Games”