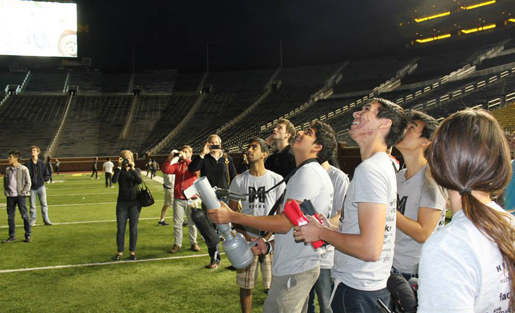 The MHacks hackathon drew more than 1,200 students from colleges around the country. Students were able to go on the field at the University of Michigan's football stadium. Photo from MHacks' Facebook page.

The geeks have taken over the football stadium.

The largest stadium in the U.S. was occupied on a recent weekend not by players and cheering fans, but by a hackathon that drew more than 1,200 students from colleges around the country.

“Having exposure to all of that in a hackathon setting, and being around all the people who are pushing them to do hard work — it’s an incredible learning opportunity." -Barin Nahvi Rovzar

In another twist, the lead sponsor of this event wasn’t one of the major tech companies, but Hearst Automotive — including its brands Car and Driver, Black Book and MOTOR, which are all probably best known as magazines.

The MHacks hackathon in “The Big House “ at the University of Michigan on Sept. 20-22 offered teams of undergraduates the opportunity to access data and code from a variety of sponsoring companies, then to imagine new products and uses for them. Students worked with mentors from the sponsors and used rich real-world materials to hone their hacking skills.

In return for its sponsorship, Hearst demonstrated its assets and capabilities to these creative young developers, while getting their feedback and ideas for the reinvention of magazine content.

Hearst approached MHacks about sponsorship as the university-affiliated hackathon was planning its second event, says MHacks director Thomas Erdmann. Hearst had previously sponsored a New York hackathon in February 2013 around its fashion brands (also covered by MediaShift), but the MHacks event at Michigan was much bigger.

Michigan’s strong car culture, along with the established relationship between Car and Driver and the University of Michigan, made highlighting Hearst’s automotive brands a logical fit.

“Hearst approached us, and we worked with them over the summer to articulate better what they were trying to get out of it,” says Erdmann. “We ended up with a mutually beneficial agreement. What Hearst is trying to do is to show that the data is out there, data available for anyone to use if they know how to get the code.”

Barin Nahvi Rovzar, Hearst Corporation’s director of emerging technology and development, says that hackathons allow Hearst to explore its magazines’ content in new ways. The automotive brands are all data-oriented, with their focus on specifications, reviews, sales information, and pricing, among other details. All that information is mostly invisible to the brands’ audiences, particularly their magazine readers.

“As a reader of the magazine, you’re only exposed to as much as the editors can pull together in various ways. We thought it would be great to see what else could be pulled together,” says Rovzar. “Car and Driver is a great example. A PDF of the specs of a 1965 car isn’t something users regularly get access to on the site. What are different experiences we can build that would get users different data?”

Participating in the hackathon could accelerate the process of generating new uses and interfaces for that data, and also would build connections among the student developers, the larger tech community, and Hearst.

“It was cool for us to work with a company that wasn’t just more of the same. [Hearst] definitely brought a unique perspective. They had more to gain in terms of building their brands,” Erdmann says. “I talked to students afterward who said, ‘I had no idea that Hearst had APIs, that Hearst was a technological company.’ … Everybody knows about Facebook and Twitter, but very few people know about Hearst.”

The MHacks teams worked on a variety of projects, some involving Hearst’s content. Hearst offered two prizes of $3,000 each for the best uses of their Car and Driver APIs and for the “Best B2B Hack” using a Hearst API.

Scott Straley, director of technical development for Car and Driver, says his team did its own “internal hackathon” for about six weeks to prepare their code for use at MHacks. The preparation helped the hackathon participants work with the magazine’s data efficiently.

Straley was especially impressed by a prize-winning MHacks project that analyzes the sentiment of articles in the magazine over time. It highlights particular key words in the articles and evaluates whether the author presents those terms in a positive, negative or neutral light. Applying mathematical techniques to that language and graphing the results then reveal the changes over time.

“You’d see a spy photo article come out online. There’d be a lot of hype about seeing the shots of the new car, and [sentiment would] spike to really favorable. But if the vehicle didn’t deliver, you’d see sentiment drop down,” Straley explains. “There isn’t a tremendous amount of reader value in that, but there’s a lot of value in that for publisher, and in providing feedback to the manufacturer. … You could slice that data in different ways. You could see [whether] our articles remain fair and neutral based on the author, the time of year, or other factors. It’s a litmus test on your own bias within the publication.”

Rovzar and Straley both say that the Hearst-related MHacks projects might continue, if it’s of mutual interest to the student developers and to Hearst.

“We won’t keep all of this content and information exposed publicly. We’re trying to see which of the teams might want to pursue this further. If there’s things we think could be commercialized, that could become an app or a part of a site, we’ll pursue it further,” Rovzar says.

Even if the specific projects created at MHacks aren’t further developed, everyone involved recognized the educational value of the hackathon — especially the opportunity to work with real-world code and challenges.

“How do you get in front of [students] the hardest problems, the meatiest content and data?” Rovzar says. “Having exposure to all of that in a hackathon setting, and being around all the people who are pushing them to do hard work — it’s an incredible learning opportunity. It’s how they master their trade, by working with new people. It augments some of the learning they do in the classroom.”

And for magazines, Straley says that hackathon participation is a chance to generate new ideas and product possibilities quickly. MHacks lasted just 36 hours.

“Relying strictly on article value in an increasingly noisy space — where there are aggregator applications like Trapit and Flipboard and things like that — the data you provide, the unique insight into the information you provide, is what’s going to bring readers back,” he says. “By participating in hackathons, you get to see some neat ideas and see smart people who are going to be the future.”

Correction: This story has been updated to correct the spelling of Barin Nahvi Rovzar’s name. Apologies for the error.

One response to “Hearst Sponsors Stadium Hackathon to Inspire Innovation”