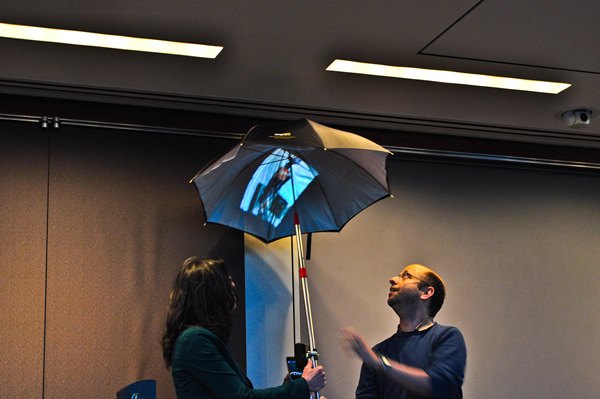 One new app even projected Hearst's magazine content onto the inside of an umbrella (how apropos in the bad weather) -- take that, smartphones!

Picture this: You’re waiting in line at your favorite local drugstore or grocery store and have two minutes to kill. What do you do?

Five years ago, many people would flip through one of the many magazines positioned near the checkout counter: Cosmo, maybe, or Esquire.

If you're going to look at your phone at Whole Foods, Hearst wants to be in your phone."

In 2013, we still browse and buy magazines in checkout lines, but customers are much more likely to whip out their smartphones — checking text messages, updating Twitter or Instagram, maybe a quick game of Angry Birds. But not so much reading sex tips in Cosmo anymore.

That’s a big problem — not just for your spouse or significant other, but for the traditional magazine publishing industry in general, which has seen it’s single-issue sales plummet because of scenarios just like I described above. Why buy four magazines and a newspaper for a cross-country flight, when you can get lots of media on your iPad or Kindle?

“We do find a number of people, if stalled for a minute, will steal a look at their email or news feed. Everyone that has products at checkout has to battle for consumer attention,” David Carey, president of Hearst Magazines, was recently quoted as saying on the front page of the Financial Times. You see, Hearst Corporation publishes Cosmopolitan and Esquire and a number of other popular titles like Elle, and you’re not buying as much of them as you used to. Roughly 18 percent less of them in the U.S., in fact.

Not coincidentally, I found myself sitting in the auditorium at Hearst Tower the very day after that quotation appeared in the FT, listening to Carey kick off a hackathon with roughly 150 hackers, designers, and fashionistas in attendance to compete for cash and prizes for the best new pieces of software designed in a frenzied 24-hour session focused on fashion and mobile.

If you’re going to look at your phone at Whole Foods, Hearst wants to be in your phone. As Carey said in the Hearst Fashion Hack kickoff, “We are blessed with so much IP.” Now the only question is, what are all these geeks going to do with it? It’s easy enough to come up with some applications of Hearst’s API, but will the new apps be truly relevant to readers as they move from print and across screens? That was the question posed to the hackers by Hearst’s creative CTO, Phil Wiser.

Hearst is an old company — over 100 years old, in fact, founded in 1886 by an American icon, William Randolph Hearst. The company is still, to a large degree, controlled by his direct descendents, which is great for control and stability but not necessarily for creative destruction. Regardless, the face of media and publishing is evolving rapidly, and Hearst and similar organizations (think: Conde Nast, News Corp., large book publishers like Pearson) need to experiment with new technologies and business models for their very survival.

And so an experiment began with these hackers and their technology company partners and sponsors, including Microsoft (which I work for), Google, Amazon, HTC, Klout, GILT, and more, fueled by Red Bull, coffee (writer’s note: the coffee in the Hearst Tower lobby is actually pretty great), cookies, and a phalanx of beefy, suited security guards watching over more nerds in one room than they’ve probably seen in their lifetimes.

At some point during the Hearst Fashion Hack, the VP of Engineering at Hearst, Jim Mortko, commented, “There’s nothing quite like the feeling you get when you have to get something done in a compressed time period.” And compressed this hackathon was, down to only about 24 hours due to, oh nothing, a Fashion Week blizzard that befell the city the evening before. But passionate hackers arrived on time in the snow and slush, ready to create fashion and mobile applications drawing on Hearst’s API and those of the tech partners present.

I write in some detail about the best apps (and particularly about the best Microsoft platform-based projects) elsewhere at Publicyte.com, but here’s a sampler of some that I liked, in general:

One new app even projected Hearst’s magazine content onto the inside of an umbrella (how apropos in the bad weather) — take that, smartphones!

With startups like ModCloth, StyleSeat, Birchbox and others merging fashion and technology and making Fast Company’s “most innovative companies in technology” list for 2013, it’s more important than ever for fashion brands, media companies, and other entities in the space to be building relationships with tech-savvy idea people, developers, and established entrepreneurs.

By that standard, Hearst Fashion Hack was a success for its namesake. Wiser summed it up nicely for me just before the final app judging on the stunning 44th floor of Hearst Tower, overlooking Central Park and midtown Manhattan: “This event has already exceeded our expectations…Everything is upside from here.” I’m looking forward to seeing if Hearst Fashion Hack becomes a yearly New York Fashion Week staple.

Mark Drapeau, Ph.D. is the director of innovative engagement for Microsoft’s public sector division, is a member of the Microsoft Office of Civic Innovation, and is the producer of the Microsoft-Bloomingdale’s charity fashion show series Geek 2 Chic. You can follow him on Twitter at @cheeky_geeky.