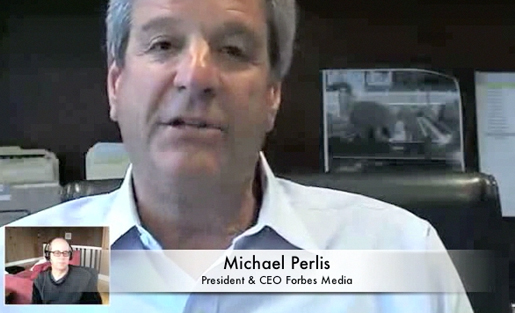 When B.C. Forbes first launched the bi-weekly Forbes magazine back in September 1917, he likely couldn’t have imagined what would become of his scrappy business publication. Nowadays, Forbes Media remains a private company, but has reinvented itself with: an online platform at Forbes.com with 1,300+ contributors; a native ad platform with BrandVoice; brand extensions including conferences and international editions; and a technology company that is looking to license its publishing platform obtained by purchasing True/Slant (and installing Lewis Dvorkin as chief product officer).

"We're in fact in beta with a couple customers who would buy a license to use our technology to deliver their own content." -Mike Perlis

That’s a lot to consider. To really rethink and reinvent itself, Forbes brought in Mike Perlis as CEO in December 2010, notably the first non-Forbes family member to run the mother ship. Perlis cut his teeth in traditional magazine publishing at IDG, Rodale, Playboy and Ziff-Davis, before becoming a venture capital partner at Softbank from 2000 to 2010, helping fund BeliefNet, Associated Content, Huffington Post and BuzzFeed. The true traditional player turned digital rainmaker. And during his time at Forbes, he has not shied away from pushing the envelope, taking the contributor network purchased from True/Slant and adding branded content — called “BrandVoice” — before “native ads” were in vogue.

He was in a tough spot when he joined the company, which had gone through rounds of layoffs while its peers BusinessWeek and Fortune suffered a similar downturn during the economic decline. When I talked to Perlis recently, his only regret in the chaotic period when he came to Forbes was that they didn’t move faster into mobile. Perlis now looks beyond those print competitors to web-native publications (some of which he funded at Softbank) who are innovating with native ads and responsive sites.

“Winning used to be a narrow paradigm for us built around print competitors,” he told me during a Skype video interview. It’s very different for us today … It’s not about beating anyone, it’s about building our business uniquely around the assets that we’ve got.”

Part of that includes expanding internationally in many countries with 30 local language editions. And part of that means Forbes is now a technology company as well, and Perlis said they have two beta testers who will license the publishing platform in the near future. Below is an edited version of our conversation, with some video clips included.

Tell me about the culture at Forbes, and how it differs from other places you’ve worked before?

Mike Perlis: Gosh, you’re so immersed in the culture here that it’s hard to compare it to any other. I’d say what’s different about it in general is that the company is almost 100 years old — it will be 96 years old shortly — and what we’ve tried to instill here is a sense that Forbes is authoritative and credible in all the ways you’d expect. But because of the business we operate in, because I think we’re such innovators, we really operate the company like a startup. We’re a 96-year-old startup in terms of the way the company operates, and that’s unlike any place I’ve been … That’s what really differentiates us from a cultural perspective.

To continue to feel like we are a startup, that means we need to innovate all the time. That’s what we have to do in the very dominant digital part of our business in order to compete and to win.

Perlis describes what it’s like being the first CEO of Forbes who isn’t a member of the Forbes family:

You talked about trying to win. What does winning mean to you? Typically, Forbes would look at competitors such as Fortune and BusinessWeek magazines, but with your digital focus, you could be going against BuzzFeed, NYTimes.com, and many, many others. How do you define winning?

Perlis: You’re absolutely right, winning used to be a narrow paradigm for us built around print competitors. It’s very different for us today. We want to win in four areas. We want to continue to win in print because it’s the gateway, it’s the front door to our brand in many ways. The second leg is digital and that’s where we might compete with some of the folks you mentioned and the entire digital business audience.

The third leg of our strategy — and we have to win at all of these — are brand extensions, where we do events, newsletters and branded products of all kinds. We’re announcing an education initiative shortly, a financial services initiative coming … Brand extensions are very important to us, and that business growing around the world is very important.

The fourth leg is to be a very good technology company. The business that we built around our contributor-based platform [purchased with True/Slant] involves a great deal of technology, and we’ve built what we think is a great platform … for our contributors to post 500 pieces of content every day. We think that technology lets us go out in the marketplace and show it to people — we’re in fact in beta with a couple customers who would buy a license to use our technology to deliver their own content…

It’s not as it used to be — it’s not about beating anyone, it’s about building our business uniquely around the assets that we’ve got.

Perlis talks about why a large audience is important beyond just delivering advertising — it also gives Forbes convening power for events and brand extensions:

Do you see BrandVoice as becoming a larger portion of your online ad revenues? It seems like that’s where a lot of the talk is, around native ads.

Perlis: Absolutely. BrandVoice is our native ad product, and it’s the place where we give marketers the ability to use the platform that we’ve created. To use it from the business side of the wall — and there is a wall between the business side and editorial. [Brands] use it to deliver content that is non-sales-y, that is thought-leadership in its orientation, that is transparently from a marketer, but that uses the same tools that we use with our editorial … from our contributors and full time staff.

BrandVoice is incredibly valuable when done correctly, and we go to great lengths to teach the participants in BrandVoice program how to use it in the right ways. When an advertiser uses BrandVoice in the right way and touches all the bases, their posts can be among the most popular posts on the site. It’s so important that we all begin to understand that users can’t be underestimated, the folks reading content are savvy and understand the way the marketplace works today. They’re capable of understanding what’s good content, what’s not; what’s a direct-sales message, what is thought leadership.

You and Huffington Post have proved beyond a reasonable doubt that adding lots of contributors adds to your traffic, adds to your diversity of thought, but does it lead to great journalism and investigative journalism? That’s something that people say is missing from business journalism.

Forbes.com contributor Dave Thier has made nearly 1,000 posts

Perlis: I think things will evolve over the next couple years. There are certainly more voices than ever before, from a content-creation standpoint. At Forbes, we still have a core team of veteran reporters, a couple hundred strong — veteran and freelance reporters who work exclusively for Forbes and create content for print and online and around the world. We now have 1,300 contributors who we choose very carefully. Not everyone can come and post on Forbes, it’s a very distinguishing factor for us. We vet the folks who come on board. They have an expertise and passion that would be impossible for us to employ on a full-time basis … They have the chance to be compensated if their writing creates traffic, we pay on a merit basis, and that gives us a chance to have many more voices.

Will a lot of Pulitzer Prize work come out of our contributor network? It’s hard to say. But great journalism is coming out of the network, and from the other ones that exist out there. And at the same time we continue to have our full time staff religiously cover business and finance for us, and I hope we’ll continue to win awards for those.

You talked about having a startup culture at Forbes. This older company, but with a startup mentality. But as we all know with startups, the end point is usually a buyout or IPO. Is that the end goal for you as well?

Perlis: We don’t look at it that way, but we certainly look at what we’re doing every day and how that creates value for the business. Are we creating a bigger business? Are we building a business that is seen by others as more valuable? For people to be able to gauge based on the size of your audience, the kinds and number of products you’re creating, how profitable the business is — all of the measures that a startup would use to have the kind of exit you mentioned, are the kinds of things we’ve built in. Not just to our culture, but to the motivation and compensation that we have for our employees.

Where that goes … the company has no immediate plans. The company’s been around for nearly a century, and we have no immediately plans to change that, but we do plan to build the business of Forbes to be as big as the brand Forbes. The brand is ginormous, here and around the world. We haven’t discussed our expansion internationally. We’ll have, by the end of 2013, 30 local language editions of Forbes, many of those are pioneers in the markets they serve with Forbes.com. We launched recently in Thailand and Vietnam, and we’re in China and Korea and all around Latin America.

When you’re going into these new markets, how do you deal with the various press regimes there? Sometimes they have sensitivities to certain topics and expect you to self-censor content. It can be a tricky thing online and in print to allow your writers and contributors to write what they want.

Perlis: It’s different in every new country that we operate in. Primarily we are operating in countries that are pro-business, that are friendly to business. And because we’re not a breaking news site and because we write with reflection and with greater detail, the issue is less immediate. So far we’ve dealt with it without being compromised from a censorship standpoint, and without knowingly crossing lines that shouldn’t be crossed.

What traditional media does Perlis respect for work they’ve done in digital and mobile recently? He answers that in this clip:

You did quite a revamp when Lewis D’vorkin came on from True/Slant, and you came on. It was obviously a time of change and transition. Was there anything you regret from that time?

Perlis: It’s hard to look back with regret because we accomplished a lot, and I feel good about it. If I got real micro, I could make some comments about things we could have emphasized more or less, but in the main I’m really happy about things…

What do you think about Forbes magazine and Forbes.com under Michael Perlis’ leadership? Has it been innovative or lost credibility by opening up its online platform to so many contributors? Share your thoughts in the comments below.