How Newspapers Can Make Augmented Reality Sexy (and Profitable) 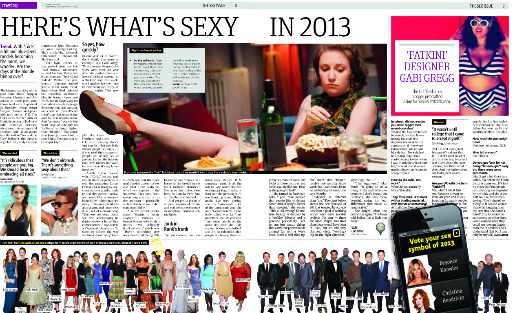 For Metro's annual Sex issue, it used augmented reality app Blippar to have readers vote on which celebrity they would most like to sleep with

Publishers in the United States have been slow to embrace augmented reality (AR), technology that lets people hold smartphones or tablets up to their newspapers and magazines and view exclusive video and other editorial and advertising content. Brands, on the other hand, have been quick to jump on the augmented reality bandwagon, according to a report by Juniper Research, which expects AR mobile apps to generate almost $300 million in revenue this year.

In recent months, at least three newspapers in Europe and Asia have signed on to augmented reality. In March, the Guardian jokingly announced that readers will be able to view its content through “a pair of web-connected ‘augmented reality’ spectacles that will beam its journalism directly into the wearer’s visual field, enabling users to see the world through the Guardian’s eyes at all times,” similar to Google Glass. (It was an April Fool’s Joke, but still…)* The Phillipine Star, a daily English-language newspaper in the Philippines, launched an AR app on April 29 that will provide readers with exclusive videos, audio and movie trailers. In addition, The Independent in Britain, which has a daily circulation of upwards of 80,000, has launched an augmented reality app to provide photo galleries, audio, and video.

"From an editorial standpoint, [augmented reality] is a great conduit back and forth between digital and print. It makes print new again, and it can help drive traffic." -Robert Edmunds

On this side of the pond, last month, Metro, which publishes free daily commuter newspapers in Boston, New York City and Philadelphia, announced that it has partnered with Blippar, a mobile AR technology company, to bring videos, coupons, online shopping and more to its readers and advertisers. I recently interviewed Robert Edmunds, director of digital for Metro U.S., about how and why it is using AR (from Blippar) on both the advertising and editorial fronts, what news value it provides to readers and advertisers, and how the company used augmented reality with its annual Sex issue. Here are edited excerpts from that conversation:

MediaShift: When did Metro start considering augmented reality, and why?

Robert Edmunds: Metro relaunched its website, metro.us, back in mid-February, and we obviously see digital media as a very, very important part of our future, as do most newspapers. We saw augmented reality and Blippar specifically as a great way to potentially drive readership from our print version to our online version, as well as it being a great tool to open the door to advertisers who we haven’t been able to see, and to grow revenue from current advertisers.

When you were doing research, did you look at other media companies that have used it?

Edmunds: They [Blippar] gave us several examples of media companies, primarily European, as well as some clients who have used it direct in the States. Once they gave us a demonstration, it was pretty clear it was something we could sell to our advertisers, and something that would also enhance our editorial product as well. What’s interesting is over a decade ago I worked for a company called Digimarc, which does something fairly similar in a way. They used digital watermarks. Back then people didn’t have smartphones; they just had regular cell phones. What you had to do was hold an ad up or a magazine story in front of your webcam on your laptop, and it would initiate some reaction or launch a URL. I’ve always been a big proponent of linking print and online.

Can you provide a few specific examples of how you’ve used AR so far at Metro both in terms of advertising and editorial?

Edmunds: We first started out with more or less a soft launch, and what we did is we enhanced our crossword puzzles. What that means is, if you download the Blippar app on your phone, and then hold your phone over the crossword puzzle, you instantly get the answers for that day’s puzzle. What’s interesting is we average almost 20,000 “Blipps” of that crossword puzzle a week. [A Blipp occurs when a reader places his or her smartphone over the content to view the augmented reality.] I think we have about 100,000 Blipps of our crossword puzzle. We saw that as a pretty good test, and then we had our Summer Movie Preview in which we enabled four or five editorial pieces. From that, on that one day, we had somewhere in the range of over 20,000 Blipps for those editorial pieces. There were three editorial pieces. One was we had an “Iron Man” trailer. Another one, you got to kind of try on the “Iron Man” costume. Additionally, I think there was added content, an interview with Robert Downey, Jr.

Can you talk a little bit more about what value the augmented reality app brings for both readers and advertisers?

Edmunds: For an advertiser, it’s all about people trying to engage with your brand. It’s also about getting people to purchase things. There are a number of ways we pitch the Blippar application for advertisers. One would be branding. For instance, we have a number of movie studios looking at using the Blippar application not only to get people a trailer and to buy tickets, but also to see additional studio offerings, to play games associated with the movies. Retailers have looked at it as a way to actually drive foot traffic. You could Blipp an ad and get a digital coupon, for instance. You can actually Blipp an ad, and be taken to a page where you can purchase a product on the spot. In terms of local advertising, real estate advertisers or real estate brokers in general, at least in New York, Boston, and Philly, have very sophisticated digital offerings in terms of virtual tours; you can do a lot of pictures of properties, contact brokers. This is a great way for them to get people to do just that. You can Blipp a real estate ad and be directly connected with a real estate broker; you can get a virtual tour of an apartment. The range of things you can do is pretty amazing I think.

The concept behind our newspaper is that it is created for time-starved commuters of a certain demographic. So, our articles are brief and to the point. There are no jumps; they are all on one page; they give you basically the who, what, why, where and how. But there’s also a ton more content we create or we can create for each topic, and that is generally housed at metro.us. This is a great way for our journalists to be able to connect interested readers with additional information for those stories merely by asking them to Blipp on that article for more information. You’re taken right to metro.us; you can get more content; it drives more traffic to our site. You can Blipp on it and get a video; you can be taken right to a picture gallery. It engages the reader on a level that you really can’t do with just print or online alone.

Can you give a specific way editorial used augmented reality recently?

Edmunds: On Friday (May 31), we had our annual Sex issue, which Metro around the world runs. We ran it here in New York, and one of the articles in print in the paper basically had photographs of 40 or so celebrities, both men and women. The article was Blippar-enhanced. When you Blipped on the article, it asked you to vote on what celebrity you would most like to sleep with. That was kind of fun. So people then had the opportunity to vote on their choice, and see the result in real time.

How does augmented reality fit into your workflow for advertising and editorial?

Edmunds: We have held several training sessions. We have a handful of people here at Metro who are trained by Blippar to use the technology on their own. The way it works in the workflow is, in essence, it’s really an editorial decision in terms of what’s going to be Blippar-enhanced at any given time. Without knowing exactly what their workflow is, I’m assuming that writer makes a decision on exactly what they want enhanced, and then we have someone in technical support who actually does the technical work. The process itself is not too involved. It can be as involved as cutting and pasting a URL for instance.

What advice would you give to other publishers who are thinking about using augmented reality?

Edmunds: From a sales standpoint, the benefits are: If you can use this augmented reality to either increase a buy or to upcharge and get a premium out of it, that’s a basic benefit from there. It does make you accountable because you can obviously tell with digital media how many people Blipped your ad, and advertisers might draw conclusions rightly or wrongly about the effectiveness of the ad based on that. That’s an issue with anything in advertising. But also what’s great about it is it’s something brand new that most advertisers have never seen. Once you’re in front of an advertiser and you show them the technology, it really gets the conversation going, and I think it’s opened a lot of doors for us. There are a lot of advertisers on a daily or yearly basis, and it can be hard to get a meeting with them because they don’t think we have anything new to show them. Well, this is truly brand new, and it’s something that we found has gotten very high-level meetings just by virtue of demonstrating the technology.

From an editorial standpoint, again, it’s a great conduit back and forth between digital and print. It makes print new again, and it can help drive traffic. The interactivity with content I think when done creatively can only enhance the reader’s relationship with the publisher.

UPDATE (6/12/13): The original version of this story mentioned the Guardian story about its own augmented reality glasses like Google Glass, without pointing out that the story was an April Fool’s Joke. We apologize for the error.

Tim Sohn is a freelance writer and editor who focuses on media and social media. Follow him on Twitter @editortim, or email him at [email protected]