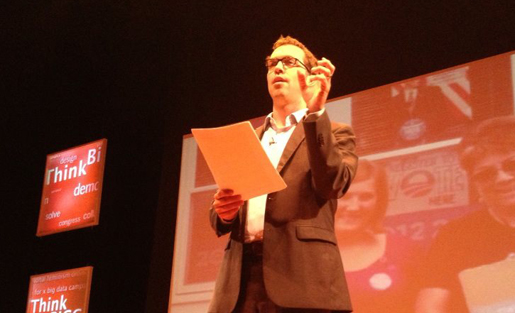 Jeremy Bird, national field director for Barack Obama in 2012, spoke of big data's "potential to change the world, to help us solve the world's biggest problems" at the Personal Democracy Forum in New York City June 7.

NEW YORK — With reports that the National Security Agency is amassing data from Internet and phone companies, jokes abounded at the 10th annual Personal Democracy Forum (PDF) in New York City on June 6 and 7, especially when the list of sponsors for PDF sounded like a tally of NSA’s tech titan collaborators — Google, Facebook, Yahoo, etc.

But against the backdrop of Silicon Valley and government snooping on citizens, speakers held “big data” in high regard and pointed to a number of technologies that had the potential to amass tons of raw data for analysis and democratization.

But Nate Silver, of the New York Times’ “Five Thirty Eight” blog and author of “The Signal and the Noise,” warned PDF not to look at predictions as wholly reliable. Silver said that all predictions should be “probabilistic.”

“What’s more important [than big data] is robust data, and what makes data robust is more than just the size of your data set,” Silver said. “It’s the data quality control.”

Popular among the plenary speeches was that of Upworthy Editorial Director Sarah Critchfield, who said that big data may not be as helpful as it appears.

With 7 billion people in the world, Critchfield noted, that is 7 billion unique data sets, all governed by oftentimes unpredictable emotion that has the potential to create viral content.

“Those of us that work with big data and those of us who work with analytics and data-driven culture…are in danger of rapidly moving towards a monolithic understanding of decision-making,” Critichfield said, “and this worries me because I value the intuition and the emotional parts of our decision-making so much.”

From teaching black girls how to code to finding for-profit institutions that do good, speakers and attendees poured over the newest ideas in the technology sector. Though most of the conference focused on the intersection of technology and advocacy, many of the ideas proposed could significantly impact the media landscape.

Amid a general cynicism of the current journalism industry, there was hope that media could more efficiently serve democracy  under the right circumstances.

In particular, the future of citizen journalism looks bright, according to Google’s Steve Grove. He says that public conversation with government officials has increased with the help of video conferencing tools such as Google Hangouts, but it has its obstacles (needs a vetting process, requires an Internet connection, etc.). [Full disclosure: MediaShift uses Google Hangouts to host its weekly Mediatwits podcast.]

“The technology was actually kind of getting out of the way, it was more about the conversation itself,” Grove said.

The concept of using Google Hangouts for live mobile collection and distribution of information also proves exciting, he said.

Engaging News Project’s Talia Stroud tackled the issue of public engagement in news organizations. Polls on websites don’t yield scientifically accurate results, nor do they get people to address difficult issues, she said.

Instead, Stroud asked, why don’t websites posit questions in the form of a slider to increase engagement and time on a website? Stroud also suggested changing polls to questions of their perception of popular opinion, followed up with real research.

“It’s a new way to do an old practice that has both democratic and business implications,” she said.

Though her research didn’t find a way to do this, Stroud also hoped to “encourage people to look at views unlike their own, encourage people to spend more time with news as opposed to entertaining content, and…do it in a way that might have some business implications as well.”

That’s a real issue, said author of “Rewired” and MIT Center for Civic Media Director Ethan Zuckerman. The irony speaks for itself that the World Wide Web, according to Zuckerman, doesn’t expose its users to competing ideas.

“We may not be getting a broader view of the world,” Zuckerman said. “We may actually be getting something of a narrower one.”

Nicco Mele, author of “The End of Big” quoting Jeff Hammerbacher, said, “The best minds of my generation are thinking about how to make people click ads.”

Judging from the applause and speakers’ exhortations to reinvigorate democratic dialogue and more efficient government, that status quo Hammerbacher pointed out wasn’t acceptable.

“We have to figure out better ways of doing it; we have to build an infrastructure of participation,” Mele said.

All photos by Zach C. Cohen