Why Do Cats Dominate the Internet? 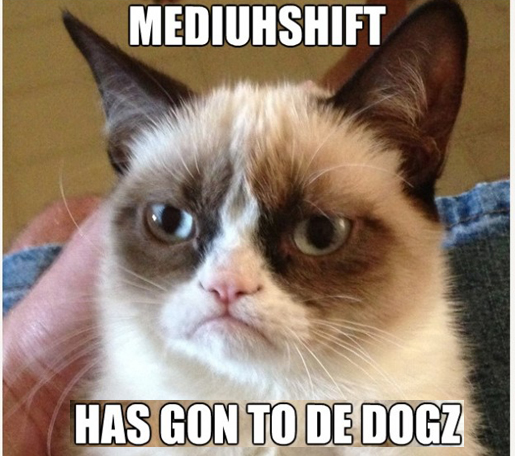 The opinions expressed via Grumpy Cat memes are pretty much guaranteed not to be her own.

I was out walking one day and saw a teeny-tiny mailbox next to a great big drainage pipe. The name on the mailbox was “Piper” — apparently since the hobbit or troll or whatever-lived-there resided in the pipe.

Piper, I later learned, is a neutered feral cat that’s become the unofficial mascot of the Beltline, a development of trails being built on old rail tracks circling in-town Atlanta. Piper soon had his (or her?) own Facebook page, which I immediately “liked,” and a Twitter account. Then I did what anyone else would do — I posted a picture of my cat with a toy that looks like a drainpipe. People from all over the world posted pictures of their cats, and the lucky few who’ve seen Piper in person shared their experiences as well. Piper became big news.

"We've actually come to recognize that the Internet is how you walk your cat like you would walk a dog." -Ben Huh
ADVERTISEMENT

What is it with cats and the Internet? The ancient Egyptians loved them, they’re great pets, yadda yadda yadda. But I rarely post pictures of my dog, even though she’s ridiculously cute. I watched “America’s Funniest Home Videos” for years, and hardly remember many felines featured. But with the advent of the Internet and camera-phones, cats are everywhere. What gives?

I Can Haz Meme?

I decided to ask the man who built a business on Internet cats — Ben Huh of the Cheezburger Network. Cats do rule the Internet, and he has the statistics to prove it: People submit 10 times as many LOLCats as Hot Dogs to the site.

He sees several reasons for cats’ growing popularity. For one, people who have children later in life are more likely to have pets — often cats — and often several at a time. Plus, generations of cat lovers have bred them to be adorable.

“We have created weapons of mass cuteness,” Huh said. “We’ve been doing it for 10,000 years and everybody’s surprised: ‘Oh my god I can’t believe we love cats!’ We biologically engineer them to be the object of our affections.”

Cats are also more complex and expressive than dogs, and the computer screen makes the most of those often-subtle faces. Plus, the Internet gives cat people a place to come together.

“We’ve actually come to recognize that the Internet is how you walk your cat like you would walk a dog,” Huh said. “It’s a little odd when you show up to a dog park with a cat on the leash. If you’ve ever seen chaos, that’s what chaos looks like. We socialize with other cat owners through the web.” Plus, the Internet lets people like Huh, who are allergic to cats, enjoy them from a distance.

You can watch the full interview here:

So it seems they’ve gone from cuddly companions to a larger-than-ever part of our culture, with no sign of slowing down.

“It’s become somewhat surreal and amazing — and it keeps going.” That’s how Scott Stulen of the Walker Arts Center, a contemporary art museum in Minneapolis, describes the response to the first-ever Cat Internet Video Festival. For a program on social media and crowdsourcing, Stulen decided to move the often solitary experience of watching cat videos online into a real-life social environment. Within two hours of posting a blog entry asking for people to nominate their favorite videos, the story went viral, and the L.A. Times called. That’s two hours — not two weeks or two months. Last year’s festival attracted 10,000 people — the largest gathering in museum history.

Among the Internet celebucats to attend was the Lil BUB. Vice Media shot part of the new movie “Lil BUB & Friendz” (which recently won Best Feature Film at the Tribeca Online Film Festival) at the Walker’s festival.

Boston, San Diego, Memphis and Austin, Texas, all restaged the Walker’s festival. It opened this past Saturday in  Oakland, Calif., and will be followed by Portland, Ore., this June. The 2013 festival will be held August 28 at the Minnesota State Fairgrounds. Almost one-third of the 15,000 tickets are already sold. This year’s videos will then tour San Francisco, Chicago and Brooklyn this fall.

It’s become an international phenomenon. Stulen’s received submissions from Japan and Russia and is in negotiations for showings in Austria and Ireland.

“There’s something about the cat video that transcends language and transcends culture,” he said. And it’s more than simple entertainment, because people feel such a strong connection. “There’s definitely something much deeper to it,” he concluded.

The Great Wall of Oakland, which staged the festival on Saturday, is a 100-foot square projection screen, which Executive Director Issabella Shields compares to an outdoor IMAX theater. She says the response to the festival has been overwhelming. Oakland’s mayor declared May 11 Cat Video Day. Sponsors poured in. Entertainers -– including a drag queen lip-synching the musical “Cats” -– donated their time. Vendors sold T-shirts and crocheted cat ears, while local organizations did art projects. All types of people, including residents of an assisted living home, were thrilled to celebrate their “cat-ness.”

“It gets people excited from all demographics and ages,” she said. The event also benefited the East Bay SPCA, which hopes to recruit 200 families to foster the yearly April and August baby-boom of homeless kittens.

Shields’ opinion about why people love Internet cats? “I’m just as curious as the next person,” she said. “It’s going to be interesting to see when 5,000 people get on a public street and watch cats the size of Godzilla,” she joked prior to the fest. “Maybe we’ll find out then.”

Jack Shepherd -– BuzzFeed’s “Beastmaster” –- sees hundreds of pictures and videos daily and posts the bests ones on the animal section of the site. The question, he says, isn’t really “why cats,” but “why not dogs?”

“There’s such a large proliferation of cat and dog media. It dwarfs completely cute other contenders such as hedgehogs and bunnies,” he said.

An admitted cat person, he recently wrote that YouTube actually gets more searches for dogs than cats. Yet cats are much more likely to go viral. The average BuzzFeed feline story gets almost 9,000 viral views, compared with 5,000 for canines. Since 2011, cats got almost four times the viral views as dogs.

Maybe dogs try too hard, he said, while cats are naturally cool — sitting in sunbeams and hopping around. “That’s like kind of living the good life,” he said, “while dogs are kind of working and busy, and that’s not what you want when it’s 2:00 on a Friday.”

He has met many feline celebrities, including Grumpy Cat (who attracted long lines of admirers at this year’s South by Southwest conference), Col. Meow and Lil BUB. His biggest surprise? Many of them, including Grumpy and Venus the Chimera Cat, have professional representation.

“It’s totally surreal,” he said. “I’m trying to get an interview with a cat and calling their agent” (as if interviewing a cat wasn’t surreal enough). But it does make sense, since unlike every other Tomcat or Hairy — I mean Tom, Dick or Harry — many members of the “Cat Pack” have books, toys, products and ad campaigns.

But Huh says celebrity can be fleeting: “I tell people it’s a little bit like winning the lottery. People shouldn’t count on that…You shouldn’t quit your day job.” He says being an Internet celeb lasts about a year, and there’s always somebody on your tail. “There are 55 million cats in the United States and you’re competing with every single one.”

Shepherd also notes that dogs are predictable, while cats are anything but. “You can teach a dog a trick and you know a dog’s going to do it when you turn on your video camera,” Shepherd said. “People spend all day filming their cats hoping they’re going to fall off the couch.”

Dr. Melissa Bain, DVM, an assistant professor of clinical animal behavior at the UC Davis School of Veterinary Medicine, said her veterinary school roommate’s cat regularly dazzled them with tricks at home. “He was the coolest cat,” she recalled. “He would sit up, roll over, give a high five, spin, jump through hoops…” But when her roomie entered him in a pet talent show, he did absolutely nothing. (As an aside, while the real stage was a disappointment for her friend’s feline, I can’t help but wonder whether he would have made it big in the Internet age…?)

While Bain and her 11-year-old son like cat videos, she is sometimes underwhelmed. “I look at these videos and I think, ’10 million people have watched this? That’s just a normal cat.'”

Sharon Crowell-Davis, a professor of Veterinary Behavior & Anatomy at the University of Georgia College of Veterinary Medicine, feels cats deserve the attention and appreciation they’re getting. Despite having a reputation as being aloof and arrogant, she says they’re naturally communicative and entertaining. “From a scientific point of view they’re very social animals,” she says.

“I think what we’re seeing develop on the Internet is what happens when decisions about animals…come from the ground up -– from the people as a whole as opposed to a limited set of TV and movie directors,” Crowell-Davis said. And just as people like to watch cats, cats enjoy people-watching. She said that’s what they’re really doing when they sit outside looking in. They don’t always want to come inside -– which is why they often go right back out. They’re just checking us out.

She likes videos of mother cats caring for their kittens; she also loves Grumpy Cat. While Grumpy Cat’s body language shows she’s really a very sweet animal, her permanent human-like scowl touches people who are often stressed out by the economy and violent international conflicts.

“It’s not really culturally acceptable for us to express these negative views of the world situation…but we can look at Grumpy Cat and we can project all those negative feelings onto her, and it’s OK.”

Just as people project their stress onto Grumpy Cat, they seem to project generosity onto Piper the Beltline cat. With the help of an unidentified human who answers emails, Piper told us the Twitter and Facebook accounts got started as a way to share the notes people leave in the mailbox.

“Also, it allows me to thank the great people who bring me food, toys, and even Cinco de Mayo hats,” Piper said.

And as for why cats are the preferred animal of cyberspace? “Cats are better than other animals,” Piper typed. “Humans have known this since ancient Egypt.”

21 responses to “Why Do Cats Dominate the Internet?”