Politicians Take on Traditional Media With Their Own Social, Viral Content 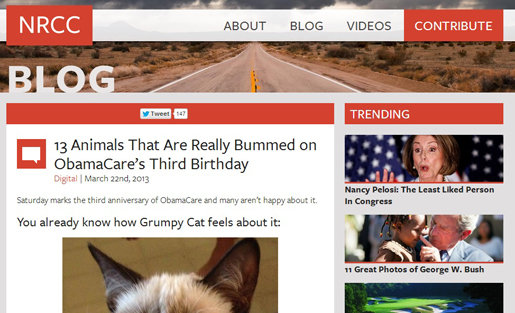 The National Republican Congressional Committee website is almost a carbon copy of BuzzFeed, a site whose core mission is to publish “shareable” content that will spread, or go viral, on the social web.

Speaking in front of a packed conference of advertising professionals in New York, Newark Mayor Cory Booker effortlessly shifted from politics to marketing and, when possible, blended the two together. The crowd was into it, as was Booker, who cycled through stories and theories about the role of social media in politics today.

One such story featured Booker playing the hero opposite comedian-turned-villain Conan O’Brien. Booker told the crowd about an insult O’Brien hurled at the city of Newark — a joke that the best health plan for Newark residents was a ticket out of town — and how he, in response, posted an announcement to YouTube banning O’Brien from Newark’s airports. Booker then pushed the video out via his widely followed social media channels, and the counter-punch eventually garnered enough attention to shame O’Brien into an apology and a $100,000 donation to Newark charities. It was a win for Newark — and for Booker, who also happens to be co-founder of the video startup #Waywire.

“Politicians have been trying for decades to speak directly to their audience rather than have the press filter their language.” -Paul Singer
ADVERTISEMENT

Before recording the video, Booker said, he considered the size of O’Brien’s audience compared with the amount of people he could reach through social media. His own audience, Booker concluded, was “multiples” of O’Brien’s, leading him to believe he could “change the paradigm once and for all.” In an earlier time, Booker said, his recourse may have been to write an angry letter that would be read by “an intern’s intern.” But now, Booker could take control of the story himself.

Welcome to the new reality. Today, Booker and politicians across the country are taking their narratives into their own hands. They are using the same publishing tools as traditional media outlets, and distributing their content via the same social streams. Politicians, as a result, now wield more power to control the conversation and elevate stories than ever before. In the process, they’re drawing readers to their own sites as opposed to the pages of traditional publishers. For traditional publishers, the challenge is severe, one that must be adapted to in order to maintain their relevance and, to a lesser extent, bottom lines.

Enjoying @twitter so far. Where else can you hear from @billgates @paulpierce34 @senjohnmccain @theellenshow @usher in one day? #thisisgreat

For politicians, the quest to go around the media filter is no new phenomenon. “Politicians have been trying for decades to speak directly to their audience rather than have the press filter their language,” said Paul Singer, Congress and politics editor at USA Today. Singer pointed to a number of different tactics long used by politicians to take their message straight to the public, such as campaign flyers and town halls. Still, he said, there’s something different about what’s happening today.

“What’s new,” Singer explained, “is the electronic methods that are available to them now that were not available five years ago.” The public now seeks out information on social platforms such as Facebook, Twitter, YouTube, Singer said, and those platforms centralize their content in streams.

An update by a news organization, then, can be immediately preceded or followed by one from a politician, sometimes leaving politicians and news outlets in direct competition for readers. “As long as we are all using the same hashtag or the same keywords in our tweets,” Singer said, “it is literally an undifferentiated stream for the reader or the user on the other side.”

For politicians, many of whom are followed by more people than the publications writing about them, the streams also allow them to go straight to the public at a scale at which town halls and mailers could never achieve.

And politicians are taking note. Every U.S. Senator and the vast majority of the House of Representatives are on Twitter. Many have also set up shop on Facebook and a variety of other social networks. Ditto for President Barack Obama, whose administration is so fond of social and new media that the traditional press has complained the White House is using it in an effort to shut them out.

The content pumped out by these politicians is also often more conversational and easy to relate to than the dry press releases they have relied upon before gaining access to the stream. The friendliness, according to Singer, gives their communication a little more intimacy and maybe a little more credibility in the eyes of their constituents. “That’s nice for them,” Singer said. “Maybe not as nice for us in the news business.”

Perhaps the boldest acknowledgement of the stream’s power to take politicians’ messages straight to the public is the newly redesigned National Republican Congressional Committee website. Proudly unveiled in the beginning of April, NRCC.org is almost a carbon copy of BuzzFeed, a site whose core mission is to publish “shareable” content that will spread, or go viral, on the social web.

“BuzzFeed’s eating everyone’s lunch,” NRCC spokesman Gerrit Lansing told National Journal’s Brian Fung upon the launch, using language that hardly acknowledged a difference between his organization and a true media outlet. For the NRCC, though, that seems to be the point.

The approach seems to be working for politicians who can effectively grasp how to communicate via new and social media channels. Publishing on their own is an effective way for politicians to get a message out exactly how they want to, said PBS NewsHour political editor Christina Bellantoni.

“If you go through a media filter,“ she said, “you’re getting context and history and criticism and often a competing viewpoint, because that’s how most journalists approach their work.” But, she added, if you can directly communicate, you don’t have to go through any lens at all: “You just put out what you’d like to get out there.”

The approach gives politicians more control, said Bellantoni, who pointed to the early stages of the practice — in 2007 politicians began to put out web videos instead of holding live events for major announcements. “You can take as many takes as you need to make sure it’s perfect before you hit publish,” she said. “Then the press has no way of holding you accountable for that or asking you questions or asking your thoughts because you’ve given them one thing and that’s it.”

The strategy has been used effectively by governments and militaries too. When Israel and Hamas entered into a conflict this past November, they immediately put social media teams into action in an attempt to push their narrative outside the filter of media organizations covering the conflict. The tweets and Instagrams, at times, turned bizarre, but the approach likely yielded a net positive. “You want to get your message out without being reduced to somebody else’s selection of sound bites,” journalism professor Jeff Jarvis said at the time. “This allows them to go around the mediators.”

How The Media Can Adapt

So political media, like much of the rest of media, must adapt to the changing times. It must figure out how to maintain its readership and how to apply its filter to original content generated by politicians in a way the public wants to consume. “The implications,” said Singer, “are existential for the news business.”

To deal with the challenge, Singer said his team is working on mastering social media. “One of the ways that we’re adapting is that we’re spending an awful lot of time thinking about how we tweet, how often we tweet, and what we tweet,” he said. “We’re spending a lot more time thinking about our profiles on Facebook. We’re spending a lot more time talking about our staffs being present on social media and becoming known not only for your expertise and your byline, but also for your expertise and your Twitter handle.”

Singer said the added emphasis on social media should help USA Today better serve its readers and ensure it’s not forgotten and passed by. Larry Kramer, USA Today’s president and publisher, seems to agree. At the same conference Booker spoke at, AdAge’s Digital conference, Kramer said he’s directed the editorial team at USA Today to write with more personality. It’s a strategy publishers must embrace, he explained, at a time when social media is picking winners and losers.

Bellantoni thinks it’s a good idea for traditional media to be as transparent as possible when using content produced by politicians in their reporting. “If the media is using a video put out directly by a politician as their source,” she said, “they should talk about that.” Bellantoni said that in those instances, news organizations should take the moment as an opportunity to explain the reason they’re using content produced by a politician and how they verified it.

There are upsides to the changes too, Bellantoni said. The two-way communication between politicians and their constituents on social platforms, she explained, is a good thing. And people sitting down to watch a full speech on a politician’s YouTube page isn’t necessarily bad either.

Singer has found a silver lining too. “To some degree,” he said, “the explosion of social media use by members of Congress has been nice because they don’t really understand it either.” As a result, he said, members are frequently sticking their foot in their mouth and giving the political media more to write about. “We appreciate that,” he said.

Alex Kantrowitz covers the digital marketing side of politics for Forbes.com and PBS MediaShift. His writing has previously appeared in Fortune and the New York Times’ Local Blog. Follow Alex on Twitter at @Kantrowitz.