In a Fragmented Media Market, New Jersey Hopes to Thrive with Mobile, Collaboration 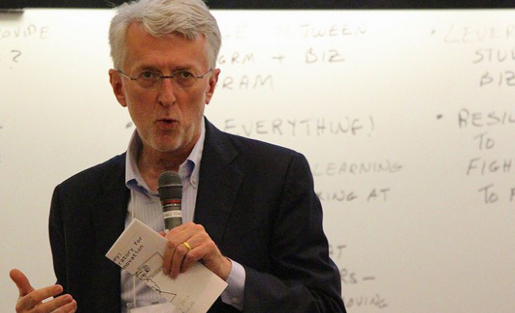 Jeff Jarvis, professor at CUNY Graduate School of Business and director of the Tow-Knight Center for Entrepreneurial Journalism, speaks to a room full of participants at the "New Jersey: A Laboratory for Media Innovation" conference.

MONTCLAIR, N.J. — At a conference at Montclair State University titled, “New Jersey: A Laboratory for Media Innovation,” sponsored in part by the Knight Foundation, newsrooms large and small weighed the current problems and opportunities in New Jersey’s current media market, laying out a microcosm of the challenges facing the American news business and how they’re evolving in the digital age to meet them.

“We’re here today to talk about how we can continue to strengthen and grow this ecosystem,” said event host Chris Daggett of the Geraldine R. Dodge Foundation.

"It is way too soon in the growth of New Jersey's [media] ecosystem to give up on anything, to say that anything is set in concrete, and it's certainly too soon to say that we're big enough." -Jeff Jarvis

In order to make room for a smaller market of advertisers, conference-goers called for more attention to newsrooms’ mobile platforms.

Jeff Jarvis, a professor at the CUNY Graduate School of Journalism and director of the Tow-Knight Center for Entrepreneurial Journalism, noted that there is currently little money in online journalism.

But he also said newsrooms can and should invest in longer stories to keep readers on their sites. The Pew Research Center’s Project for Excellence in Journalism’s “State of the Media” report found that people are spending more time reading on mobile devices than on legacy
platforms before.

Other participants encouraged journalists to invest in applications for smartphones and tablets as well as responsive design in order to reach mobile audiences.

The little nostalgia there was for the dominance of print publications was outweighed by an excitement for digital enterprises.

“When you’re thinking about your market, you’ve also gotta think about platform,” said Amy Mitchell, acting director of the Pew’s Project for Excellence in Journalism and the author of the 2013 “State of the Media” report, “and what works in one market isn’t necessarily going to work
in another.”

The funding question, however, persisted. Participants regularly drove home that the future of news would require a diverse stream of revenue, including advertising, foundational support, event sponsorship, crowdfunding and more.

In a business that previously relied solely on advertising to operate, most participants argued that ads would pay for fewer of newsrooms’ expenses than ever before.

Speakers saw the potential for reaching audiences on Facebook and Twitter, but Justin Auciello of Jersey Shore Hurricane News lamented the difficulties of making money on social media.

There is room for improvement in New Jersey’s media landscape, according to research presented at the conference by Chris Anderson, the research director at the CUNY Graduate School of Journalism, and Katie McCollough, a Ph.D. student at Rutgers Unviersity School of Communication.

The researchers found that New Jersey’s split market (Benjamin Franklin famously quipped that New Jersey was “tapped at both ends” by New York City and Philadelphia) featured highly fragmented, hyper-local, issue-based coverage that did not have the beat reporting necessary to cover the big issues of the state.

Anderson urged New Jersey’s newsrooms to invest in “shared space” news collaboration and conversation and develop beat reporting and journalism projects based on events rather
than locations.

“All of those I think require some really complicated thinking about funding,” Anderson said.

Debbie Galant is the director of NJ News Commons. She and Jarvis pointed to that organization as an example of a collaborative newsroom that aggregates information from hyper-local news outlets for the betterment of journalism in New Jersey. The project at Montclair State University’s School of Communication and Media also gives office space in MSU’s Schmitt Hall to local news outlets and promotes collaboration between newsrooms and students.*

Nobody left the conference with the exact answer to the question of sustainability in the digital age, but plenty of ways to start finding out.

Conference speakers often referred to Auciello’s Jersey Shore Hurricane News, a one-man news operation that has garnered more than 200,000 likes on Facebook and served as an indispensable source of information during Hurricanes Irene and Sandy in New Jersey. Auciello’s combination of news reporting, community engagement and social networking served as an example of a popular form of journalism that could sustain outlets across the country.

Auciello is not unique for his small operation. A panel discussion with journalists from smaller newsrooms came to the conclusion that the lack of full-time, dedicated personnel, in part caused by the crunch in revenue available to spend, made it harder to cover everything they wanted to cover. Some of the heads of these newsrooms, like Morristown Green’s Kevin Coughlin, were handling both the editorial and business aspects of the business. Coughlin admitted that there wasn’t enough time in the day to sell ads and put enough content on his site.

‘Sustainability’ in the news business

More than editorial practices, attendees were clearly interested in making sure that they’d have the money to continue to
do journalism.

John Mooney of NJ Spotlight said that smaller sites typically find it harder to get advertisers to buy space, but he did say that more specialized news sites offered opportunities for advocacy-oriented advertisers attempting to reach a
specific audience.

Getting an advertiser to sponsor an event created by a news organization, such as a roundtable discussion, is “the hottest thing right now, even sustainable,” said New Jersey Public Radio’s Jim Schachter.

But selling those advertisements isn’t going to be easy.

Janet Coats, a new media consultant for the Patterson Foundation and CEO of Coats2Coats Consulting, said newsrooms aren’t spending enough on development, only about 5 percent of their budget.

The driving force behind journalists such as Auciello, Galant and Coughlin, Jarvis said, was a passion for journalism and a dedication to the craft.

“If you don’t enjoy it, don’t do this,” Coughlin said.

“It is way too soon in the growth of New Jersey’s [media] ecosystem to give up on anything, to say that anything is set in concrete,” Jarvis said, “and it’s certainly too soon to say that we’re big enough.”

*Correction (5/23/13): An earlier version of the story noted that Debbie Galant organized the conference. The conference organizer was actually Molly de Aguiar of the Dodge Foundation.

Zach C. Cohen is an editorial intern for PBS MediaShift. He is also the editor-in-chief of The Eagle, American University’s student newspaper, and a reporter for Latin Pulse, a weekly radio program on Latin American foreign affairs based at AU’s School of Communication. Get regular updates from @Zachary_Cohen on Twitter or on his blog.