How FrontlineSMS Helped an Indonesian Community Clean Up a River 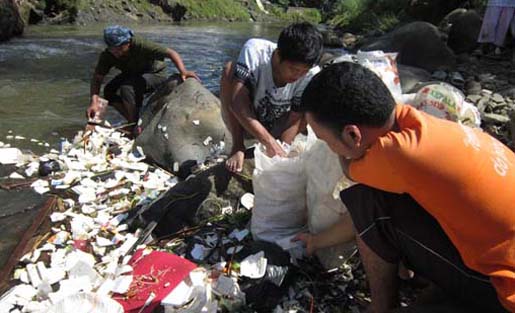 FrontlineSMS has had a strong connection with environmental issues since our founder had the initial spark of an idea while working on an anti-poaching project in South Africa. We’re delighted to share how Een Irawan Putra of KPC Bogor and the Indonesia Nature Film Society used FrontlineSMS in Indonesia to invite the community to help clean up the garbage clogging the Ciliwung River.

Community Care Ciliwung Bogor, known locally as KPC Bogor, was founded in March 2009 in West Java, Indonesia to harness the growing community concern for the sustainability of the Ciliwung River in the city of Bogor. We formed to raise awareness about the damaging impact of garbage and waste in the river, as well as to mobilize the community to take action.

The community around KPC Bogor was initially formed by our friend Hapsoro who used to share his fishing experiences in the Ciliwung River. “If we go fishing in the river now, there is so much junk,” Hapsoro once said, “All we get is plastic, instead of fish.” It was after an increasing number of similar tales from the community about pollution levels that we decided to conduct some field research. We set out to find the best spots for fishing along the Ciliwung River, particularly in the area stretching from Katulampa to Cilebut.

Some KPC members work in Research and Development of Ornamental Fish Aquaculture, Ministry of Marine and Fisheries and in fisheries laboratory in Bogor Agricultural University. So while we conducted the research voluntarily, they were always present to offer their skills and ensure our research methods were sound. In addition to the study of fish, some KPC members who work in mapping forest areas in Indonesia helped us to map the river area using GPS. We mapped the points where garbage was stacked, sewage levels and commensurate changes in the river. We also tested the quality of river water by using a simple method called “biotilik,” using organisms as an indication of the state of the river water quality in the Ciliwung River.

The results of the research were shocking. We found out that while the people who live along the Ciliwung River rely on its use for daily necessities including cooking, cleaning and washing, the river is increasingly being used as a place to dispose of trash and inorganic waste materials. The research helped us realize just how poor the Ciliwung River conditions were at the time — with worrying consequences for the function, condition, and use of the river. Not only did we uncover poor river standards, we also identified that there was a lack of public knowledge about the importance of maintaining a healthy river among the community. Waste disposal practices have become rooted in the bad habits that have been ingrained in the minds of the people who live around the Ciliwung riverbanks over a long period of time. People are so used to the methods they use that they do not realize the severity of the environmental damage which they cause.

So members of KPC Bogor got together to ask, “What can we do to save Ciliwung River in ways that are simple, inexpensive and uncomplicated?” From there, a simple concept was born. We set out to recruit volunteers to become garbage scavengers in the Ciliwung River. Every Saturday, KPC Bogor members and friends met from 8am to 11am, to pick up any inorganic matter that litters the Ciliwung River and put it into the sacks before sending it to landfills.

In many ways, we actually consider this activity as a way to meet new friends. It might be hard work that can cause us to sweat, but we understand that even though waste removal is a very simple activity, it important for the sustainability of our river and our community around it. The number of people who come every Saturday varies: Sometimes there are only two, other times up to 100 people. For us, the number doesn’t matter. What’s important is that KPC Bogor must continue to remind citizens to take care of the Ciliwung River.

About three months ago, we had some sad and shocking news that our friend and leader Hapsoro had passed away. A few of us were worried about what would happen to our 4-year-old community and how it could continue without his leadership. We gathered at Hapsoro’s house before his funeral, and we all committed to doing all we could to ensure KPC Bogor’s activities would carry on. We saw how vital this work was for the River, the community’s health, and our livelihoods. We needed to honor and commemorate the important service Hapsoro had initiated to form a sense of responsibility and awareness in the community. But how could we mobilize the community like he did?

Hapsoro in action in 2010 at the Ciliwung River with a KPC banner (which reads Ciliwung: Our life has fallen to pieces) Image: KBC Bogor

Hapsoro was a man who always actively sent SMS to all our friends to participate in regular KPC Bogor activities, especially to remind them to get them involved with cleaning the river. With an old mobile phone, he used to send messages one by one to the numbers in his phone book. The day after we decided to keep KPC Bogor alive, I asked permission from Hapsoro’s wife, Yuniken Mayangsari, about whether we could keep using his phone number to send SMS to all the subscribers. She gave me the phone at once without hesitation.

I started using Hapsoro’s mobile phone to send SMS every Friday to the friends of KPC Bogor. When I was using the phone, I realized how patient Hapsoro must have been in sending the SMS alerts about river cleaning over his three years of organizing the activities. One by one, each of the numbers had to be selected from the address book, and I could only enter 10 numbers at once. It made getting though more than 200 numbers exhausting, and it took me more than two hours! Not to mention when I forgot which numbers I’d already sent the message to. I’m sure there are a few people who got the message twice.

Because of the limited time I could dedicate to sending SMS every Friday, some friends and I decided to try using FrontlineSMS. A friend who lives in Jakarta went looking for a compatible Huawei E-series modem to send and receive messages with the software. When we were finally able to buy one, we installed it on my laptop and KPC Bogor’s laptop. Now every Friday, we load up FrontlineSMS to send alerts about KPC Bogor activities due to take place the following Saturday. It’s great because I can carry on working while FrontlineSMS is sending the messages. I can easily manage contacts and send alerts to the community in a few simple steps.

KPC Bogor’s work with volunteers is now so successful that we started a “Garbage Scavengers Race” which has now become an official annual agenda event in the city of Bogor. Last year, 1,500 people came to the river to help and we collected 1,300 bags of garbage in just 3 hours. We are now preparing for this year’s scavenge due to take place in June 2013. In recognition of the need to tackle root causes of the waste issue rather than just the clean up, we’ve also started to do more than collecting garbage. KPC Bogor now provides environmental education for elementary school children, conducts research on water quality and plants trees around the Ciliwung River. We are also able to regularly assess the river water biota, where we analyze diversity of micro-organisms, plants and animals in the ecosystem. Recently, we even made a film about the waste problems in the Ciliwung River.

Now, we use FrontlineSMS to let the community know about our new activities too. Every week we receive SMS from new people who want their mobile number to be added to the subscribers list so they can receive a regular SMS every week with information about how to join in with our activities.

Thanks to the community, the city government is now giving full support to our activities by giving us budget for waste cleanup efforts through the official budget allocation. Once, Ciliwung was a clean river that was highly venerated by the people for its famous fresh water and was relied on by the public in Indonesia for their livelihoods. It was once a source of clean water used for drinking, cooking, bathing and washing. This community wants the condition of the Ciliwung River to return to how it once was, and we’re getting there — one piece of garbage at a time.

You can watch a video with English subtitles about the KPC Bogor community here.

More information about KPC Bogor can be found at here or via Twitter @tjiliwoeng and Facebook.com/KPCBogor.

KPC members after a garbage scavenge in 2012 with the vice governor of West Java (brown shirt). Image: KBC Bogor