Fact-Checking Social Media: The Case of the Pope and the Dictator 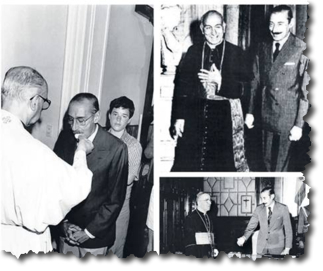 Three photos that were reported to prove that the new pope had ties to Argentinean dictator Jorge Videla.

Did Pope Francis play a major role in Argentina’s Dirty War? Reporters claim they can substantiate this allegation. They published photos of dictator Jorge Videla with a cardinal, allegedly Jorge Bergoglio, the recently elected Pope Francis. But something was wrong with these findings.

Fact-checking social media starts with numbers. How many people retweeted something?"

The buzz started just two hours after the waiting for white smoke was over. Hundreds of people, including reporters, tweeted a link to a 2011 story in The Guardian: “ ADVERTISEMENT

Blogs came up with similar stories. Documentary maker Michael Moore forwarded a link to a photo of Videla with a cardinal — allegedly, the new pope. For some newspapers, like the Dutch Volkskrant, these tweets were sufficient to break the story. “Pope sparks controversy,” the newspaper wrote.

In the end, everybody had to correct their stories. Moore withdrew his tweet, The Guardian corrected the 2-year-old article in which Bergoglio was mentioned, and Volkskrant apologized for using the wrong photos.

With the help of basic Internet research skills this never would have happened. Let’s try to debunk all four clues:

The story came from the “Comment is free” section, the opinion corner of the newspaper.

It wasn’t a factual story that was tweeted, but an opinion.

The number of retweets by itself, does not tell much about the credibility of a story. Take, for example, a look at a fake Amber Alert that was retweeted thousands of times:

But fact checking social media starts with numbers. How many people retweeted something? From which countries? How many clicked on the link? To make an educated guess, you need tools.

Keep in mind that you will miss tweets that use a shortened link service like bit.ly. You have to investigate each possible link separately in Backtweets. That’s boring work, but somebody has to do this. Only then you’ll see reporters who retweeted the link, like this Italian reporter:

She deleted the tweet, but with Backtweet you can still find it.

If you type the plus sign behind any bit.ly link, you will get link statistics+.

The trick with to

If you search in Twitter for: to (name of source) several concerns came up. Usually, followers are the first to correct false tweets. Therefore, it makes sense to use to:@mattseaton or [email protected]:MMflint (Michael Moore) to find out if somebody warned the source of the story. Here you see the same Italian reporter has some doubts after she posted and removed the link to the Guardian article:

did you counter factcheck this or is the source just #Horacio_Verbitsky‘s book? <a href="https://twitter.com/mattseaton">mattseaton</a> delong

<a href="https://twitter.com/mattseaton">mattseaton</a> annamasera Please fact check,Verbitsky was friend of Kirchners , accusations against Pope seem to be retaliation..

Who is behind that source? I use this little Google trick to find sources who talk about
the blog, but are not affiliated with it. Here’s how you do that:

The writer is Robert Perry, who has a serious problem “with millions of Americans brainwashed by the waves of disinformation.” His site wants to fight distortions of Fox News and “the hordes of other right-wing media outlets.” The blog constitutes mostly activism rather than journalism.

Michael Moore corrected his tweet several hours after he had posted the original. Without his correction, however, validation would have been possible too. You can upload the specific photo — in this case, the alleged photo of the pope and Videla, to Google Images and try to find the original source:

Google now presents a list of most popular search words in conjunction with the image. When I tried this on the exact day the pope was presented, the words were different: “corruption,” “Argentina” and “church.” This indicated the person who found the image probably typed these words in Google to find the particular image that later sparked so much controversy.

To find the first date the photo was published or that Google indexed the photo, you can go back in time. You can order Google to show you only photos older than, say 2004:

Now you get to the original source, Getty Images. In the caption it says that Videla visited a church in Buenos Aires in 1990. The new pope isn’t mentioned:

Compare this with Pope’s Francis biography from the Vatican:

It says he was a spiritual director in Córdoba, 400 miles away from Buenos Aires. Sure, they have buses and trains and plains in Argentina, but still.

Another tip now: Always think “video” when you see a picture. Just type some words from the event in Google’s search engine. This will lead to a YouTube video of the same event as captured on the Getty photo.

Now you see both people from the Getty image moving. This doesn’t make sense. Pope Francis was born December 17, 1936. Videla was born August 2, 1925. He is more than 10 years older. In the YouTube video, the ages don’t seem to match.

We have uncovered enough reason to doubt the original claim about Pope Francis, so now it’s time to go for the final check. Probably more people discovered what you just found out. So, order Google to search for fake photos:

Don’t search in English, but go for Spanish and French. You can type the words in English, and Google translates the keywords and the hits are translated back into English.

The first hit leads to sources who claim that the Michael Moore photo is false:

Other keywords can be “not true,” “hoax” or “blunder.”

It’s also a good idea to send a tweet to Storyful — they even have a hashtag #dailydebunk.

Nevertheless, some newspapers broke the story afterwards, as Volkskrant did on March 15. They apologized the next day:

By doing some background research, this could have been avoided. Had proper fact checking taken place, this story should not have been written in the first place.

Dutch born Henk van Ess, currently chairs the VVOJ, the Association of Investigative Journalists for The Netherlands and Belgium. Van Ess teaches internet research & multimedia/cross media at universities and news media in Europe. He is founder of VVOJ Medialab and search engines, Inside Search, Cablesearch.org and Facing Facebook. His current projects include consultancy for news websites, fact checking of social media and internet research workshops.