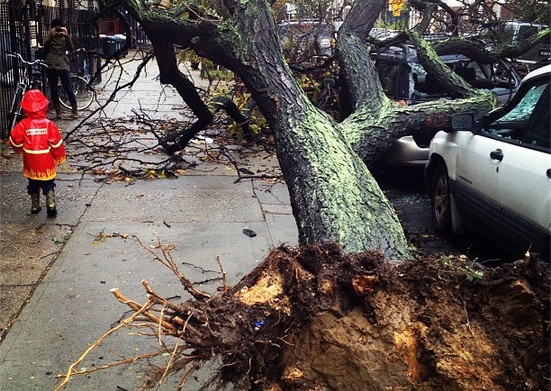 Much of the buzz in 2012 was defined by media coverage of big events, some much anticipated, some unexpected. As we drew closer to the 2012 presidential elections, news organizations engaged audiences with an unprecedented focus on social media, interactives, and Nate Silver’s math. When the London Olympics finally rolled around, NBC was swept over in complaints about the delayed broadcasting. Hurricane Sandy grew into a national crisis overnight, and people turned to Instagram to document their experiences.

We also saw other big changes in social media: Facebook’s disappointing IPO signaled a pressure for all social networks to monetize, while Pinterest suddenly became the “next big thing” for media and advertising.

We also saw trends grow to new heights this year. The cord-cutting discussion expanded to one of “cord nevers.” Many more newspapers adopted metered pay walls. And the time-honored Newsweek finally gave up on print. But we close 2012 with several big questions to ponder in the new year, including: Will drones become a media industry standard?

Without further ado, here’s our annual list of the Top 10 Media Stories of the year.

In addition, Nate Silver’s FiveThirtyEight blog on the New York Times website ushered in a hot debate on using predictive analytics in election coverage. Silver’s blog, which provides statistics-driven projections, accounted for one out of five visits to the New York Times website on the Monday before Election Day. It turns out, he predicted the election with 100 percent accuracy, which surely further propels the big-data conversation in media.

2. NBC gets in hot water for delaying Olympic coverage

Before the opening ceremonies of the London Games even aired on NBC, complaints were already overflowing on Twitter. And soon, #NBCFail became a steady trending topic. Most people opposed NBC’s decision to delay coverage, and many more rebuked the network for throwing around spoilers online before competition aired on TV. Yet despite endless complaints, plenty of people watched the Games on NBC, and the network saw higher ratings than expected (a 9 percent increase from the 2008 Beijing Games). This brings into question just how much media organizations should pay attention to reactions on social media.

Hurricane Sandy arrived with heavy-duty coverage from both news organizations and the very people experiencing the devastation. This time, everyone embraced Instagram to tell their story. Hurricane Sandy became Instagram’s biggest event as 1.3 million storm-related photos were uploaded, peaking at 10 Sandy-related photo uploads per second. In comparison, #superbowl pulled in just 85,000 photos. Time Magazine even sent out photojournalists to especially cover the storm via Instagram, and the resulting photo gallery was one of its most popular ever.

However, the virality of shocking news and images on social media encouraged trolls to share fake information. Throughout the storm, viral photos which had been Photoshopped from scenes in “The Day After Tomorrow” or from previous storms spread like fire through social media. Twitter user @ComfortablySmug started rumors such as “the New York Stock Exchange was flooded” or “ConEdison is shutting down power in all of Manhattan,” sending much fear throughout the Twitterverse. The troll, later revealed as Shashank Tripathi, apologized on Twitter and resigned from his position as campaign manager for New York congressional candidate Christopher Wight.

Fake information gone viral continues to plague major events, including the more recent Newtown shooting. Moving forward, we have to think about important questions like who will do important vetting and how we can prevent people from being endangered by fake information on social media.

Newsweek has been struggling for years. It began revamping its structure and design in 2009, focusing more on editorials and commentary. It merged with online site the Daily Beast at the end of 2010 and made Tina Brown editor of the whole combined entity. Since then, Newsweek has begun covering more pop culture than its old dish of hard news and politics. But none of these changes could save the almost century-old publication from sustained revenue losses, and finally, terminating its print edition. Newsweek will continue to live as Newsweek Global, a subscription-based, all-digital publication focused on growing a tablet and online presence worldwide.

Seeing such an established publication go all-digital brings the “end of print” prophecy closer than ever before. Unless publications figure out the right equations for monetization, distribution and content, the trend may continue — which brings us to the next big story.

In 2012, the number of U.S. daily publications with pay walls doubled to more than 300 titles. Gannett, the largest newspaper publisher in the U.S., plans to move all of its 80 community newspapers behind a pay wall by the end of the year. Gannett titles will follow the pay wall system introduced by the New York Times in 2011, which has seen great success. Online readers will get somewhere between five and 15 articles per month for free before being prompted to subscribe. The L.A. Times, the Houston Chronicle, and Crain’s New York also went behind a pay wall this year. And the Washington Post and the Daily Beast unveiled plans to start charging readers in the coming months. Readers should expect a much more complex online news ecosystem, where pay walls become the norm.

2012 opened with great anticipation for Facebook’s initial public offering. In the weeks before the IPO debut, everyone scrambled to buy Facebook shares. When May 18 finally came, Facebook (trading as “FB” on NASDAQ) sold 421.2 million shares for $38 each. When the day ended, the IPO appeared to be a big flop. First, technical glitches on the NASDAQ exchange delayed trading for almost a half hour and problems continued throughout the day, confusing investors about whether their investments were even successful. Shares closed at just 32 cents above its opening price. By August, the price-per-share had dropped to $20, nearly a 50 percent loss from the opening value. And at end of November, Facebook shares fought back to just $27 a piece, still a 28 percent loss from the IPO.

The weak stock market performance from Facebook raises doubts about the business value of social media companies. Foursquare, for example, is currently struggling to attract investor attention. Now more than ever, social media companies need to figure out how to monetize in order to regain investor confidence.

7. Fact-checking continues to rise during election

One of the most aggressive movements during the 2012 Elections was fact-checking. This year, reporters did not shy away from criticism and instead made candidates’ falsehoods defining news headlines. All the big news organizations contributed fact-checking efforts, as did stalwarts such as PolitiFact and FactCheck.org. There were even big waves of crowdsourced fact-checking on Twitter and Reddit.

Campaigning in the digital era means preparing for scrutiny by millions and for lies to go viral. For example, the most retweeted posts during Paul Ryan’s speech at the Republican National Convention were fact-checking statements. While fact-checking this election has enjoyed great popularity on social media, there is pushback questioning the neutrality of fact-checkers and whether fact-checking works at all. Regardless, it looks like the fact-checking fever is here to stay.

8. Continued rise of cord-cutters and cord-nevers

2012 brought more fears of cord-cutting — that is, people quitting cable and satellite TV. A recent report by Nielsen found that a segment of the U.S. population has a broadband connection but no cable and watches half as much TV but streams twice as much video as the general population. Although this group represents only 5 percent of all U.S. households, it has grown 22.8 percent in 2012.

The industry is also talking about “cord nevers” — the young people who only know Internet video and who will dictate TV viewing patterns of the future. TV providers are trying to reach this audience by making shows more social, hoping to bring engagement back to the television screen. In the upcoming year, TV providers also need to pay attention to the ways consumers mix and match modes of TV watching, including not only Internet streaming, but also time-shifted TV and mobile viewing.

Pinterest, the social network that lets users create virtual pinboards, grew exponentially in 2012. The site was created in 2010 but shot to fame this year as more brands recognized the network’s advertising power: Each image pinned links back to the original source. Weekly visits from North American users was a little more than 1 million in 2011, but that number skyrocketed to 29 million this July (an increase of 2,183 percent). Pinterest reached 10 million monthly visitors faster than Facebook and Twitter did and now ranks within the top 30 U.S. sites by total page views. The New York Times, the L.A. Times, the Wall Street Journal, USA Today, Time, and many magazine titles from Conde Nast and Hearst have all jumped on board. Perhaps in the next year, we can see if Pinterest traffic is sustainable and whether all those image linkbacks are really generating value for marketers.

Drones are predominantly perceived as instruments of war. But when a story broke that celebrity news and gossip site TMZ had applied for a drone permit from the Federal Aviation Administration, the Internet exploded. Turns out, the story about TMZ was false. Last month, however, Missouri NPR affiliate KBIA launched a “Drone Program” to develop drones that can help media organizations collect information.

Supporters of drones for journalists cite it as a promising way for journalists to acquire their own data instead of relying on government-provided data sets. These developments led to necessary discussions on the ethics of using drones for journalism. A MediaShift piece by Katy Culver cited safety, conflict of interest, and accuracy and context as the main ethical issues. Our poll gauged public opinion on drones, and the most popular response was: “For disasters or war: yes; for stalking celebs, no.” The public can expect further debate as commercialized drones become more of a reality.

Here are a few other stories worth mentioning this year.

>Native advertising, which focuses on in-stream user experience, was all the rage in the media and tech industries this year. Venture capitalists and publishers report plans to invest even more in native advertising in 2013.

>2012 confirmed the rise of mobile news. Pew Research Center’s State of the News Media in 2012 reported that one-fourth of Americans use a smartphone, one-fifth own a tablet, and nearly 30 percent consume news on mobile devices.

> In 2012, everyone’s new favorite medium was the old-school GIF. BuzzFeed, the Atlantic Wire, and other sites live-GIF’ed key moments from major events like the election and the Olympics Games. And then the Internet shared them like crazy.

What do you think? What media stories were the biggest ones this year? Did we miss any key ones? Share your thoughts in the comments below.