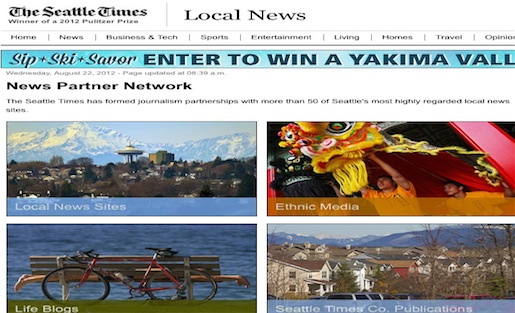 J-Lab recently released the results of its Networked Journalism pilot project, a three-year initiative that “called for eight newspapers and one public radio station to network with local blogs,” resulting in “nine different models of collaboration,” J-Lab reports.

In a detailed report called Networked Journalism: What Works, J-Lab’s executive director, Jan Schaffer, outlines the problem the project was designed to explore:

One of the most defining characteristics of the successful projects was a genuine respect for the quality of news and information being generated by the new players in the news landscape." -Jan Schaffer

With U.S. newspapers losing more than 42,000 journalists since 2007, local news coverage has suffered. At the same time, hundreds of local blogs and news sites have launched in their markets … What role can traditional news organizations play not only to expose their audiences to more news than they themselves can deliver, but also to connect new sources of information rising throughout their communities?

She concludes that for a partnership between a legacy newsroom and its community partners to succeed, two things are needed: First, “it is the responsibility of the hub news organization to provide their news networks with enough visibility and outbound links to drive traffic to their partners’ sites.” And second, “it is the responsibility of the community news partners to post frequently enough to be robust participants and to nab the visibility — either on the network page or the home page — that would bring them traffic.”

Of the nine pilots, Schaffer counts five as clear successes.

I recently interviewed Schaffer about the project by email. The following is an edited transcript of that interview:

Collaboration Central: What characteristics, if any, did the more successful pilot projects share, that differentiated them from the projects that didn’t take off?

Schaffer: There’s no question that the more successful Net-J pilot sites had several things in common. The most successful tended to be based in communities that had a robust emerging-news ecosystem: Seattle, San Francisco and Portland, Ore., for instance, all have dozens of indie news sites and lifestyle blogs producing content for their neighborhoods or niches, and the hub site could cherry pick from the best of them for the initial partners. Once the quality of partners was established, other partners were more willing to come on-board and be validated in a similar fashion.

As important was how frequently Net-J partners produced new content. If outbound links are not refreshed regularly, partners won’t gain the traffic that makes it worthwhile for them to participate and the hub site doesn’t get enough news to attract audience attention. It was harder for a rural site such as Asheville, N.C., to find suitable partners. Although the Citizen-Times tried to partner with college news sites, they were not generating stories with year-round frequency.

Stability of newsroom leaders and of project coordinators was key. In Seattle, Portland, Pittsburgh, Tucson, Ariz., the same people were with the project from beginning to end. Staff turnover in Lawrence, Kan., made ownership of the project very difficult.

Willingness to give the partners a presence on the legacy news organization’s home page was also an extremely important factor in juicing visibility, traffic and validation of the startup enterprises.

I would also say, however, that one of the most defining characteristics of the successful projects was a genuine respect for the quality of news and information being generated by the new players in the news landscape. There is a recognition that things have matured beyond the “blogger in in the basement” stereotype. As KQED’s Bruce Koon said, many of the emerging news organizations are reporting news he doesn’t see elsewhere or reporting it “more deeply” than the local newspapers. Seattle’s David Boardman said the emerging blogosphere was healthy and impressive enough that The Times felt a little threatened by it.

Indeed, Angie Newsome’s CarolinaPublicPress.org just became the first online non-profit news service to be made a member of the NC Press Association.

Collaboration Central: Based on the lessons you learned from these nine pilot projects, what would you consider essential criteria in determining whether to invest in a collaborative news project moving forward?

Schaffer: A good win-win scenario is essential. If partners are looking for traffic and training and hub sites are looking to build what Peter Bhatia of Portland calls a “big tent” for journalism, those are promising ingredients that help avoid a situation where the little guys feel big-footed by the big guys.  A community that has a lot of emerging news sites and would welcome some way to amplify that news and information is also important. Stability of leadership and some corporate buy-in helps. Miami benefited from its parent McClatchy being willing to create “channels” on its website for the partners. Asheville suffered from the absence of an editor for a year.

I was very impressed by the eagerness of the partner sites for training and their willingness to abide by content-sharing agreements that set out protocols for fair use, attribution, use of photos, etc. We do have all those agreements available online.

Even though some of the startups launched as counterpoints to the big news organizations in town, there was very little arrogance, that I saw, when there were opportunities for learning.

Collaboration Central: Did any of the pilot projects involve true editorial collaboration? For example, were there examples of staff members at major news organizations working together on stories with staff at the smaller, independent outlets? Or, were there joint editorial meetings, so editors at partner organizations could coordinate coverage?

But KQED increasingly is reaching out to its news associates to see if they are planning to cover a news event and coordinating its coverage decisions based on what might be available from its partners. Partners were invited to attend news meetings, but mostly for training and not news planning purposes.

Some of the partners have developed formal freelance arrangements for the major news organizations, whether it’s The Artful Parent in Asheville, N.C., the Freebie roundup in Charlotte, N.C., or the business openings feature in Portland.

In Charlotte, The Observer relied on QCityMetro.com for major trial coverage of a black pastor.  KQED relied on Oakland Local for Occupy Oakland coverage .

Schaffer: Many, if not most, of the individual partners use crowdsourcing every day to cover their communities. They get tips, phone calls, Twitter alerts from their communities. They can put out a call for information and get immediate feedback. But that is just an ordinary way of doing business for many of the startups and was not a formal part of this pilot project. If anything, this project gave the legacy news organizations a little more access to that kind of ears-to-the-ground information.

Schaffer: In part, the design of the project originated with J-Lab. We invited the hub newsrooms to take part and required them to partner with at least five hyperlocal partners. It’s a testament to the appetite for collaboration that so many more partners were willing to sign on.

Our design of the project inevitably meant that a digital platform would have to be involved if the partners were going to share anything. If I were to do it again, I’d require that someone from the hub organization’s advertising department be involved.

The Seattle-KING partnership was not a formal part of the Net-J project, but it was a creative attempt to figure out whether it was possible to monetize a geographic network of news sites. The slices of the pie were just too small to divvy up and make it worthwhile because of the cost of the ad-serving platform. I think down the road we’ll see some less costly solutions to this problem.

Collaboration Central: What’s next for the five pilots that you dubbed “wins,” in terms of how they plan to sustain the networks they’ve built? Are they all keeping their coordinators on staff? Any other operational changes to allow them to continue the networks?

Schaffer: I think the various sites are handling project coordination very differently.  Charlotte has assigned the project to its Innovations Editor. Portland’s Cornelius Swart has been hired full time. KQED has been able to cobble up some funding for a coordinator and hopes to continue to do so. In Pittsburgh, the project was always run by full-time staffers. And even Miami and Tucson have some of their original partners participating. Seattle is trying to push responsibility for the project down to the line editors.

One interesting development to watch: No sooner had we gone to press, when the Seattle Times announced a partnership with Datasphere, an entity that goes after some of the very hyperlocal advertising that the startups rely on. It will be interesting to see what effect this will have on its News Partners program.

Collaboration Central: Stepping back from this particular project, are there any other examples of journalistic collaboration on your radar at the moment that you find particularly exciting?

Schaffer: Certainly, there are efforts to collaborate in Chicago, in Phoenix and the emerging effort that Debbie Galant is running in New Jersey out of Montclair State.   We’ve also seen several of the investigative news startups — Texas Tribune, VTDigger, for instance — openly sharing their content with other news organizations in their states.

And J-Lab has had interesting success in Philadelphia with getting news orgs to partner on a one-off enterprise reporting project.

I think any and all efforts to figure out how to maximize resources for the benefit of the information needs of communities make a lot of sense. Large news organizations will never have as many feet on the street as they once had. But startup news organizations are beginning to responsibly fill those gaps in coverage, and they deserve to have a megaphone for their efforts. I think if public media would get more involved, it would make for an ideal local news ecosystem.