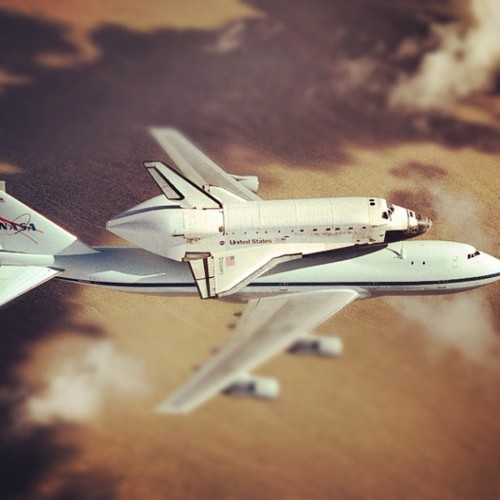 Instagram played a big role in the social response to the shuttle's last flight. This photo is from the "Instragram blog":http://blog.instagram.com/post/21266979614/space-shuttle-discovery-flies-over-washington-dc.

More than a decade ago, I was driving down a Tampa, Fla., street when I saw one of the most amazing things I’d ever seen — and may ever see. A space shuttle, piggybacked on a jumbo jet, came out of nowhere and seemed to fill the entire sky. It was massive — seeing it on TV was one thing, but seeing how incredibly big it was compared with its surroundings was staggering.

In those days, before social media, I could only tell my friends, not show them. So when I saw the recent Twitter chatter about the Discovery’s farewell flight from Kennedy Space Center to Washington, D.C., where it will be displayed at the Smithsonian, I was elated. People could not only share what they saw — they could share the experience itself.

If the shuttle can sit on a plane, I'm calling bullshit on overweight luggage." - Alison McQuade, D.C. resident, via Twitter

News organizations used Twitter to let people know they were carrying it live. But once the 747 bearing the shuttle touched down, and the news cycle went back to normal, witnesses to history were still uploading fresh videos. Many showed how the fighter jet accompanying the flight looked as small as a housefly in comparison.

People shot photos and videos from rooftops, balconies, windows and the ground. Many videos posted on YouTube and other sites included dialog that captured the witnesses’ exuberance and awe.

Everyone from members of Congress to us common folk took to Twitter to share their emotions. “Sad to see Discovery retire as it flies over DC,” tweeted Sen. Kay Bailey Hutchison. “America needs a space program we can believe in again.”

“Not when there are people on Earth who can be helped with all that money saved,” replied one follower.

Hashtags including “SpotTheShuttle” and “Discovery” helped people follow conversations including words such as “beautiful,” “incredible,” “patriotic” and “amazing.” Instagram pictures had effects that emphasized the event’s historic nature.

But few things are so serious that they can’t be put into an appropriately skewed perspective. When I see the Shuttle atop the 747, I can’t help but think about a baby koala on its mother’s back. Others take a more common-sense approach.

“If the shuttle can sit on a plane, I’m calling bullshit on overweight luggage,” tweeted D.C. resident Alison McQuade.

People will have many more chances to shoot and share images of the Shuttle Discovery. But never again can photos be taken of it in flight. I for one am glad that social media exists to give us the opportunity to share and “socialize” the experience.

And if you live in the Northeast – heads up! The shuttle Enterprise will leave Washington April 23 and do a similar fly-over of New York City, as it heads to its permanent home at the Intrepid Sea, Air & Space Museum.