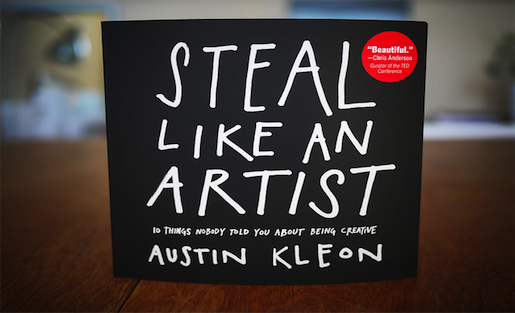 One of the highlights of SXSW for me this year was a session called “Everything is a Remix, So Steal Like an Artist,” a conversation about remix culture and creativity between artists Austin Kleon and Kirby Ferguson. As the session title indicates, their philosophy is that all artists build upon the work of others — nothing is 100% original. (For example, as Ferguson argues, “Star Wars” is in fact a collaboration with dozens of threads of influence, from Flash Gordon to Joseph Campbell’s “The Power of Myth.”) In other words: Culture itself is a form of conversation — and collaboration.

It’s fitting, then, that Kleon and Ferguson had their conversation at SXSW, where one of the main goals “is to foster collaboration between between people with similar interests,” according to event director Hugh Forrest (who adds, “… even if they don’t understand quite yet that their interests are similar”).

You could argue that Kleon and Ferguson’s SXSW session itself was a remix, building on earlier SXSW conversations about remix culture — including the 2009 screening of Brett Gaylor’s film titled “Rip! A Remix Manifesto,” which I wrote about here.

Or you could dismiss that perspective as absurdly meta. Either way.

I wasn’t that enamored of this year’s SXSW — too many crowds, too corporate, too few quality sessions (you can read my critique here) — but after attending the festival six times now, I have to give credit where credit is due: The event does indeed fuel collaboration, in large part simply by attracting so many creative people to one place, at one time. Other festivals and conferences do this, too, of course, but the interdisciplinary nature of “Southby,” paired with its emphasis on creativity, and its location in sunny, inspiring Austin, gives it a distinct advantage.

As Brian Reich, author of “Shift & Reset: Strategies for Addressing Serious Issues in a Connected Society,” wrote to me in an email:

SXSW brings together a unique mix of people — creatives, programmers, marketers, advocates. These folks don’t typically get together in a single place, or focus on the same topics. So simply by proximity, SXSW forces you to engage with and interact with folks from different perspectives. That creates opportunities to look at issues differently, to form future projects with a different group of people around the table.

In Reich’s case, participation in SXSW inspired him and a small team to produce We Can End This, a series of sessions at SXSW 2011 designed to get people to reframe and rethink the way we address hunger. Partners included Share Our Strength, Feeding America, the Capital Area Food Bank of Texas, as well as Tyson Hunger Relief, the Con Agra Foundation, Mashable, Pepsi, and SXSW itself. The group’s goal was to agree on 3-5 big ideas that could be implemented within a year.

Reich noted that ultimately, those ideas were generated, but not fully implemented, though several partners put aspects of the ideas into practice. Still, the effort fueled this year’s New Empire Builders project, featuring some of the same participants.

Of course, there’s no collaboration without relationships, and dozens (hundreds?) of relationships are formed at SXSW. Andrew Hyde offers this example on the SXSW website:

I remember walking down the hallway to go to a keynote and randomly complimenting someone. We hit it off realizing we worked in the same niche area of interaction design. Moments later, I saw Kathy Sierra and decided to strike up a conversation (that ended up going for two hours). In a 20-minute period, in a hallway no less, I made two fantastic friends that I have kept in touch with for five years. You can’t underestimate those moments, or the potential for them.

I’ve met filmmakers, comedians, librarians and even (gasp!) Canadians at SXSW. We aren’t working together on a formal project just yet, but several of these relationships have lasted well beyond the festival — and who knows what role they’ll ultimately play in my life.

Of course, SXSW is also a chance to nurture existing relationships — to spend time with people you primarily know online, or via long distances. Many circles in the Venn diagram of my professional life intersect at Southby, and the highlight of the festival for me each year is catching up with people from various communities, from public media to comedy. Again, the Austin location makes these reunions even better — sitting in the sunshine, sharing a Lone Star or breakfast taco (or both) is the perfect way to reconnect. (This year, Mother Nature threw a few cold, rainy days our way, which made me realize just how essential sunshine is to the festival’s appeal. Also, as a pregnant woman — no Lone Star for me. But I digress.)

Again, it’s not just that SXSW brings people together in person — we’ve all been to conferences that do this and fuel nothing but boredom, not collaboration. There’s a unique alchemy at play at SXSW, I think, that has something to do with being interdisciplinary, something to do with an emphasis on creativity in all its manifestations, and something to do with Austin itself. SXSW’s Forrest observed:

(Austin) has been a mecca for live music, bands, artists and other creative/independent thinkers since the mid-1960s. So, I think the spirit of creativity that prevails for 10 days at SXSW is a strong reflection of the spirit of creativity that prevails in this city for 365 days a year. SXSW does NOT happen in a vacuum — the vibe and personality of Austin is one of the strong contributing factors to making the event so special. Of course, maintaining this vibe and personality is always a challenge when you grow. But, over the years, I think that SXSW (and Austin) have scaled pretty well.

I don’t know if I agree with him on that last point — with 2-hour-long registration lines (and more lines everywhere you turned), I think Southby may need some re-engineering to maintain its value moving forward. The reputation of the festival as a cauldron of creativity may sustain the event for a while, but nothing can live forever based on past success. I wonder, will SXSW be able to collaborate with its community to preserve what makes the festival great? (Is my perspective warped? Do newcomers find the festival just as invigorating as I once did?) I hope you’ll share your perspective, and also let me know about any collaborations you’re part of that grew out of Southby.