The Twitter Effect: How Social Media Changes the News Narrative 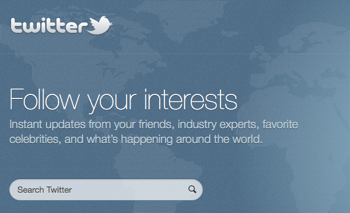 The Victorian poet and critic Matthew Arnold, best known for the bleak and cynically fatalistic love poem, “Dover Beach,” once described journalism as “literature in a hurry.”

Students' long-windedness is likely an expression of our cultural tendency toward both validating the worth of all experience, and publishing a play-by-play of said experience on Facebook or Twitter."

As the news cycle has been spurred on by Twitter and social media, and quickened to the point of being nearly instantaneous, I can’t help but wonder what Arnold would think of the 21st-century version of “in a hurry,” and of the recent tendency toward brevity and first-person narration at the expense of both news value and style.

Surprisingly, when grading my students’ feature stories last semester, I noticed that, contrary to my expectations, the stories were long. Too long. I’d assigned 800-1,000 words and been graced with 1,200-word plus stories that, while grammatically correct and well-written, suffered from doldrum-like paragraphs in desperate need of a breeze, and also from the exceedingly long, flat quotes that I’d forbidden. It’s as if students had somehow picked up on the Microsoft approach to writing, and clumsily shoveled as many features into their stories as they could fit, regardless of the resulting negative impact on craft.

Two factors contribute to this verbosity. The first is higher education’s tendency toward paying lip service to the idea that more is better. Students complain about the length of their research papers, the number of chapters they’ve been assigned, and the hours spent at the library — despite the fact that research indicates they are doing significantly less work than a generation ago. It’s ultimately a sort of don’t ask, don’t tell, in which students write more, and hope that professors slip into grading effort or output.

Students’ long-windedness is also likely an expression of our cultural tendency toward both validating the worth of all experience, and publishing a play-by-play of said experience on Facebook or Twitter in a manner that breaks the narratives of our daily lives down into stop-motion slivers.

When the times comes to write, rather than organizing information hierarchically, or building carefully hewn scenes populated by people saying important things, students struggle to fuse stop-motion Twitter slivers — both literal and metaphorical — back together into cohesive stories.

Relying on the ‘hive’ narrative

Their murkiness also comes from their trust in a sort of reporting by committee, or faith in a “hive” narrative, where readers and reporters expect the collective Twitter feed, and the corresponding blog posts, to sort the story out for them. As a consequence, they are not inclined to take an assertive stance as far as determining what the news is, or where the story should focus.

The concepts of the inverted pyramid, the five Ws, and news value encourage students to think logically and work toward structure. These skills are more important now, than ever, given Twitter’s 140-character capacity, and shrinking story lengths across the board.

However, all too often, much of the content that students encounter online, in the wild, and that they in turn model their own writing on, is neither hierarchically organized, nor particularly literary. Instead, it’s a fog of brief snippets of first-person blog-speak and a file photo hurriedly culled from somewhere.

When there’s breaking news that’s not particularly urgent, or great in scope, it’s often difficult to get well-organized information, even with the help of Google News. Many nights I’ve attempted to find news updates of trending stories in real time. I’m often disappointedly overwhelmed with Twitter feeds or blog posts, or lifestyle-media sites in which essentially the same story appears over and over again. We have news 24/7, but it’s like the same episode of the “Twilight Zone” is on every channel, because the news-gathering apparatus hasn’t yet caught up with the content delivery systems, and likely won’t, given the economics of reporting in today’s world.

Despite all of this, as we’ve discussed in class, social media is very useful when reporting straightforward breaking news. Did the gay marriage bill pass in Albany, N.Y.? Yes, according to my friend’s Facebook post via my iPhone. When the nuclear crisis happened in Japan, citizen journalists were able to report details through the social media that mainstream reporters couldn’t get for numerous reasons. The same goes for the revolutions in Egypt and Tunisia.

But when it comes to everyday, mundane news, when things get even a little complicated, and when what’s important isn’t immediately obvious, the news risks getting lost in the noise.

Consider Twitter’s impact on the reporting of the recent death of “Jackass” star Ryan Dunn in Chester County, Penn., for example. Although the Philadelphia Inquirer, and the AP mostly got the story right, their breaking coverage was a bit vague and relied too much on Twitter feeds. They also didn’t push the police to comment on whether or not Dunn had been drinking. New York’s Daily News, on the other hand, cut straight to the chase, however speculative, and noted that Dunn was wasted according to gossip site TMZ.

Dunn’s wastedness, however likely, given the time of the accident and what I know about the 2:00 a.m. last call in Pennsylvania and the hairpin turns outside of West Chester, wasn’t substantiated by the police report. Of course, the police report meant little, because the toxicology tests were not yet done, and judging by the skid marks and the incinerated Porsche, the police were right that Dunn’s near 140-mph speed was a problem, if not the only problem.

Not enough and too much information

As reported collectively, the reader suffers both from the effects of not enough information, and too much extraneous information. The police report was revealed Smoking Gun-style. But except for the police, there weren’t too many solid quotes. The bar manager, predictably, said Dunn was O.K. to drive. At risk of liability, what else would a bar manager say? The majority of the early stories kicking around the information superhighway point to what Dunn’s co-stars and buddies, Johnny Knoxville and Steve-O, tweeted, or are about Roger Ebert’s insensitive joke-by-tweet and the ensuing backlash.

In the hours after the accident, Dunn’s comrades were predictably too grief-stricken to talk to the press. But a reporter needs to get someone on the phone, and not rely on tweets, or on fellow Jackass, Bam Margera’s mom. A decade ago, pre-Twitter, a reporter would have tried to get the filmmaker Spike Jonze, one of the minds behind the original “Jackass,” and likely the most eloquent member of the crew, on the phone.

This gossipy “hive” narrative yields little new information, despite that it has the look and feel of news (stock file videos and stills of the “Jackass” guys being Jackasses and a lame movie of the “crime scene” two hours after the fact designed, cynically, to draw hits).

For journalism students, the result of such coverage is not just that they’re prone to emphasize unmediated narrative, or superficial gossip, when the time comes to report their own stories, but that they aren’t necessarily hungry for a scoop, because the new media ecosystem often feels like one big collective story where the “news” is a best-fit line between different outlying points of absurdity, first-person narrative, and “expert” speculation.

Perhaps 24 hours or so of Twitter chunks, sifted and sorted out of de facto stop-motion narrative mode, might yield a story that harnesses new media’s power.

As journalists increasingly use social media, they’ll need to develop strategies aside
from just redundantly “breaking” snippets of narrative that are already known to anyone following the source’s tweets. They need to function as human Twitter aggregators, and to extract the news from slivers of narrative — both literally from Twitter, and figuratively from their lives and their sources. Helping our students cultivate this selectivity might offer us something of a return to Arnold’s notion of literature in a hurry remixed for the 21st century.