Why Missouri’s J-School Should Rethink Its Approach to Twitter 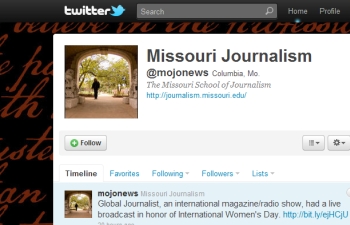 Do you check the official Twitter feed for the Missouri School of Journalism on a regular basis? Probably not, based on its dismal number of followers.

As of today, the official Twitter account of Mizzou’s J-School had just 630 followers. That is a far cry from most other top journalism schools and a negative reflection on our own.

The Missouri Journalism School's [Twitter] feed reveals that its tweets are made up entirely of press releases."

How does the Mizzou J-School Twitter feed compare to other journalism schools? Well, let’s look at how many people follow the Twitter accounts of a randomly selected sample of top undergradate and graduate J-Schools across the country:

As students at the Missouri School of Journalism, we’re familiar with the J-School’s reputation as one of the top journalism schools in the country. For years, Mizzou has sat comfortably at the top, alongside universities such as Columbia and Northwestern. But because we are a school that prides itself on innovation in online media, why is it that our Twitter efforts are lacking?

At least we have more followers than arch-rival Kansas… but not by much. And that’s important: The number of followers is the most objective way to measure the value of the content one posts on Twitter. Simply put, the Missouri School of Journalism does not have many followers because it is not posting enough valuable information.

A quick look at the Missouri Journalism School’s feed reveals that its tweets are made up entirely of press releases. They’re about J-School students and professors winning awards and other news that boosts the school’s reputation. This information is important to include, as Twitter is a great public relations tool. At the same time, press releases can be boring, and unless one is mentioned or knows someone who’s mentioned in the release, most people on Twitter won’t bother to read them — or, it turns out, follow @mojonews.

Plus, the feed has had a measly 15 tweets since the Spring 2011 semester began, so Mizzou students can hardly count on Twitter to keep up with the happenings in the J-School. Maybe that’s why just a month and a half after we began publishing J-School Buzz, a blog about the Missouri School of Journalism, our Twitter account already has 931 followers, about 300 more than the journalism school’s.

Columbia Journalism School uses its Twitter feed to remind students of workshops and lectures as well as to publicize content that its students have published. It even engages in conversations with students, sometimes @ mentioning them and responding to their comments. Its Twitter presence is friendly, interesting and consistent, with about two tweets per day.

The University of North Carolina School of Journalism and Mass Communications has a similar approach. It also retweets students and other UNC accounts on a regular basis. One can read tweets about upcoming events, view students’ work and even find links to internship and job opportunities.

The University of Southern California’s Annenberg School has one of the most conversational Twitter accounts I saw, with an average of 10 tweets per day. It uses the hashtag #ascj, for Annenburg School for Communication and Journalism. Students, alumni and professors have joined in, so it’s easy to communicate. They even encourage prospective students to use the #ascj hashtag to chat with current J-School students.

New York University’s J-School does such a good job of filling their Twitter feed with interesting content that it took me a full five minutes of scrolling through tweets to find an actual press release.

Of course, the relationship between Twitter followers and the quality of content or interaction is not a direct one, as the millions who’ve read @charliesheen can attest.

In the case of J-School Twitter accounts, the size of a J-School program or its location may matter.

But look at Columbia University: Its graduate program has only 400 students. By comparison, Mizzou’s J-School has a combined 2,300 journalism students in its undergrad and graduate programs. Yet Columbia’s Twitter feed has about nine times as many followers.

Of course, Columbia benefits from being located in America’s largest city, so it’s likely that it has a following in the community beyond its Morningside Heights campus. That’s certainly not the case for UNC’s J-School in cozy Chapel Hill, which had a population of only 54,492 people in 2007. @UNCJSchool has thousands more followers on Twitter than the University of Missouri, despite Mizzou’s location in Columbia (2010 population: 108,500), a city nearly twice the size of Chapel Hill.

Like many other typical college students, checking my Twitter account is one of the first things I do when I sit down at my computer. And because we spend so many of our waking hours (and some of our non-waking ones) in the J-School, it’s only natural to expect more communication from it.

I want to visit mojonews and find links to students' work, reminders about club meetings, and announcements of speakers and films being shown in the J-School. These are the kind of tweets we feel obliged to send out at J-School Buzz because mojonews does not. I want to see links to relevant news stories and other content that students would find helpful and interesting. The Mizzou J-School should be using social media not just as a mouthpiece for its own achievements, but also as a learning tool for students.

Suzette Heiman, director of planning and communications for the Missouri School of Journalism, maintains the J-School’s Twitter account. Heiman says the account is used primarily as a publicity tool. And while including more information on Twitter is a good idea, it’s more complicated than it sounds.

“It’s a matter of how it’s going to be monitored, and having proper organization,” said Heiman.

Currently, J-School students receive relevant news and information via email. Heiman says for the foreseeable future, that system will remain in place.

How do you think the University of Missouri School of Journalism can better use its social media? Let us (and the J-School) know in the comments below, or better yet, tell them yourselves on Twitter.

Jennifer Paull is a senior at the University of Missouri, majoring in convergence journalism and minoring in psychology. She is also the social media editor for J-School Buzz. While journalism is her first love, after graduation she plans to pursue her masters degree in school counseling.

A version of this story originally appeared in JSchoolBuzz.com, a site dedicated to reporting the latest news and analysis about the University of Missouri School of Journalism. Founded in October 2010, J-School Buzz is produced by current J-Schoolers. You can follow JSB on Twitter and Like us on Facebook.